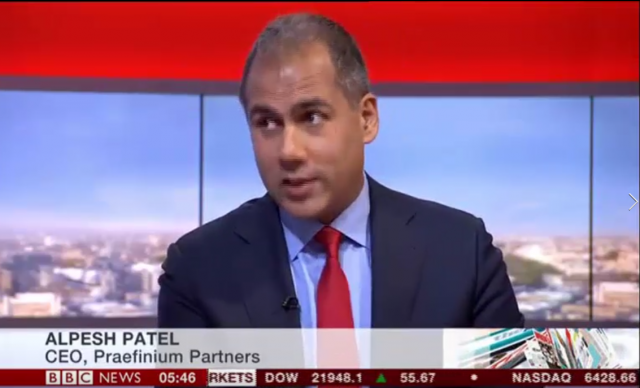 The writer: Alpesh Patal
Date first published: 4 September 2018
Shareholder value is the key concern of both every UK FTSE 100 Board and of people like me who are well known professional investors and whose media comments on such matters are in demand. It matters for the pensions who depend on the returns from their investments in FTSE 100 companies. It matters for the wealth and taxes generated and the good that can be done as a result. It matters for the salaries a growing company can pay. It matters for the same reasons Martin Luther King dreamt of.
The US stock market is at near all time highs. Google is headed by an Indian. Microsoft is headed by an Indian. Adobe is headed by an Indian. Cognizant is headed by an Indian. Pepsi is headed by an Indian. It’s not the Indians, it’s the diversity I reckon that leads to performance. Don’t believe me – the diverse England cricket team beat the homogenous Indian one.
But seriously, reading again the report on Ethnic Diversity of UK Board got me thinking. A friend of mine and I both used to write for a national newspaper. She for the Times and I for the Financial Times. She and I were both appointed by the Prime Minister to the UK India Roundtable. She was recently appointed to the board of a FTSE 100 company. She is is not an ethnic minority. But that is not necessarily relevant. But is it?
I am conducting an experiment. I am writing to the chair of every FTSE 100 company. Let’s see how many reply. Just reply. Even if to say there is no vacancy on their board, or to say which agency they use, or forwarding on to their nominations committee.
I am conducting this experiment because reading the above report these parts are incredibly important: (by the way the report is by the Equality and Human Rights Commission is a statutory body established under the Equality Act 2006. It operates independently to encourage equality and diversity, eliminate unlawful discrimination, and protect and promote human rights. It encourages compliance with the Human Rights Act 1998 and is accredited by the UN as an ‘A status’ National Human Rights Institution.) So this stuff matters more than just shareholder value.
“A survey of 130 ethnic minority non-executive, executive and senior directors suggests that most believed that discrimination had meant they had had to work harder to reach board level or the most senior positions. Nearly two-thirds believed that the unconscious bias of CEOs and boards is hindering ethnic minorities from progressing to board level and that ethnic minorities are not in the ‘old boys networks’ of leadership teams and executive search firms.”
The report also explains, “Our inquiry found that three-quarters of companies had board diversity policies. However, around two-thirds of these had not set objectives or targets to increase the number of women on their board. For senior management/executive levels, less than half of companies had a diversity policy and less than two-fifths had set gender targets.”
“Our inquiry findings indicated that nearly all FTSE 350 companies (91%) used executive search firms for executive and non-executive appointments. Executive search firms use a variety of recruitment channels, including networks, contacts and recommendations, but rarely advertise for candidates. Our research showed that just 2% of companies publicised non-executive director appointments on their external corporate websites, in newspapers or using social media and only 1% did this for executive director roles. Executive search firms did not believe that publicly advertising roles added to the value or quality of the search process and were concerned that it might attract unsuitable candidates.”
Search firms are of course doing what the company boards are telling them. It’s not good enough. Time not to be passive.

Time to get aggressive for shareholder value. It matters because I want British companies to be worth more.

I’ll keep you posted what kind of replies I get from the FTSE 100 companies.
We must speak out, boldly at every opportunity.
Indeed, the week when, led by Baroness Flather and Lord Bilimoria, the Commonwealth Gates were the scene for commemorating the service of Commonwealth soldiers in the two World Wars, we have every right to be represented in every aspect of British life – in proportionate numbers.
As I grew older, I realised my greatest asset was the colour of my skin. This skin which is a walking advertisement that I belong to the oldest of all civilisations and religions. The civilisation without which the world would not have mathematics and therefore science or the West its languages. This skin which is a brand, a brand which means whatever I do or say I am a brand ambassador for that civilisation.
You see it has been estimated Britain, which only in the last 10 years finished paying its loans borrowed to fight the second world war, spent in today’s money over 10 trillion dollars to fight tyranny, sacrificed an Empire, all for principle, all because a small Eastern European country was invaded at a time when invasions were commonplace in 1939. So when someone mocks Britain as being a spent power, you remind them of the sacrifices of this island nation, and that this is our home, where people of my colour of skin are welcome and people of the colour of my skin in return volunteer to make it a better country – because paying taxes and being law-abiding is not sufficient discharge of our debts.
Another reason: because I must prove to myself the blood running through these veins under the colour of this skin, is the blood betrothed by good fortune to me by my ancestors of India. That it is the same blood in some small part as the blood of Gandhiji and the Sardar. Bloodlines should be put to the test – voluntarily not just in times of emergency.
It is often said that the greatest generation is the generation which fought in the second world war – the generation of my grandparents. Those who sacrificed their lives to rid the world of tyranny. And they did it in the national service. We god willing will never be called upon to show such greatness, but in times of peace, our proof that we are worthy of being the descendants of the greatest generation is if we too volunteer in the national service.
Because if we don’t do this, how do we look our children’s, children in the eye when in years to come they will turn to us, as we tell them to get off the sofa and make a difference, and ask us, ‘well what did you do then?’ We have to be worthy of our grandparents, worthy of our grandchildren.
One final thing on race worth mentioning…
source: linkedIn

Tips for Traders – Focus on Quality