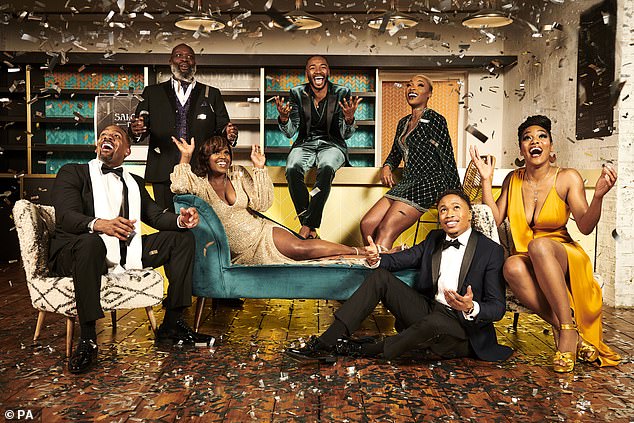 Channel 4 will host ‘Black Takeover Day’ in 2021 with Celebrity Gogglebox, Countdown and Hollyoaks showcasing black talent ‘on and off screen’ as Big Breakfast returns for one-off special.
Network to disrupt its regular schedule and reimagine some of its biggest shows
Flagship programmes to star and be hosted by black talent throughout the day
Bosses also looking at a sitcom, prime-time series and topical discussion show
By TOM PYMAN

First PUBLISHED: 25 August 2020
Channel 4 will host a ‘Black Takeover Day’ next year with flagship programmes such as Celebrity Gogglebox, Countdown, Hollyoaks and the news all presented by and starring black talent.

Network favourite The Big Breakfast will also return for a one-off special, hosted by Mo Gilligan, to kick off a day of programming like none other, to mark a year since the international protests and debates sparked by the killing of George Floyd.

From breakfast right through to late night, Channel 4 will disrupt its regular schedule and reimagine some of its biggest shows while also introducing new programmes led by black talent.

Network favourite The Big Breakfast will return for a one-off special, hosted by Mo Gilligan, pictured, during the ‘Black Takeover Day’

Channel 4 stalwarts such as Celebrity Gogglebox, pictured, will feature an all-black lineup

Bosses are hoping to bring forward a new sitcom, an unscripted prime-time series providing ‘an authentic look at black lives on screen’ as well as a new one-off late-night live topical discussion show.

Channel 4 stalwarts such as Celebrity Gogglebox, Countdown and the news programme will all feature an all-black presenting and reporting team, while Hollyoaks will be an hour-long special entirely written, directed and performed by its black talent.

Ian Katz, Director of Programmes said: ‘Channel 4 was created to give voice to underrepresented parts of society and do things which other broadcasters would not, and the Black Takeover qualifies on both counts.

‘It will be much more than a day of eye-catching programming, providing a focal point for our efforts to drive up on and off screen representation and leaving a lasting legacy on the channel and beyond.’

This is good news – and we cannot wait. But what we want to know is why is this happening for one day only? And why are we practically waiting a year for this? Why now just be inclusive all year round?

Are we being tossed crumbs to keep us quiet and make Channel 4 feel like they are doing something? Yes, we are grateful – but this needs to be the start, the entry level – not just the goal.

Furthermore every channel needs to be thinking about the talents of colour they have turned away over the years and bring them into the fold. It is time for the doors to be flung wide open.