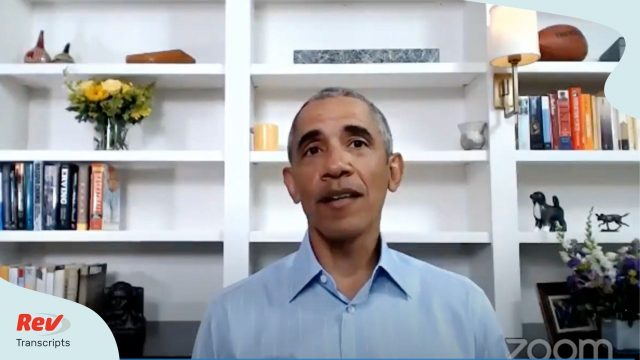 On 2nd June, 2020, Barack Obama participated in a virtual town hall in which he spoke about George Floyd’s death and the following protests. Obama said every mayor should push for police reform in his statement. Read the full transcript here.

“Let me start by just acknowledging…we have seen in the last several weeks, the last few months, the kinds of epic changes and events in our country that are as profound as anything I’ve seen in my lifetime. And I’m now a lot older. I’m gonna be 59 soon.

And let me begin by acknowledging that, although all of us have been feeling pain, uncertainty, disruption, some folks have been feeling it more than others. Most of all the pain that’s been experienced by the families of George and Breonna and Ahmaud, Tony and Sean, and too many others to mention, those that we thought about during that moment of silence. To those families who’ve been directly affected by tragedy, please know that Michelle and I and the nation grieve with you, hold you in our prayers. We’re committed to the fight of creating a more just nation in memory of your sons and daughters.

We can’t forget that even as we’re confronting the particular acts of violence that led to those losses, our nation and the world is still in the midst of a global pandemic that’s exposed the vulnerabilities of our healthcare system, but also the disparate treatment and, as a consequence the disparate impact that exists in our healthcare system, the unequal investment, the biases that have led to a disproportionate number of infections and loss of life in communities of color.

In a lot of ways, what has happened over the last several weeks is challenges and structural problems here in the United States have been thrown into high relief. They are the outcomes not just of the immediate moments in time, but they’re the result of a long history of slavery and Jim Crow and red lining and institutionalized racism that too often have been the plague, the original sin of our society.

In some ways, as tragic as these past few weeks have been, as difficult and scary and uncertain as they’ve been, they’ve also been an incredible opportunity for people to be awakened to some of these underlying trends. They offer an opportunity for us to all work together to tackle them, to take them on, to change America and make it live up to its highest ideals.

Now I want to speak directly to the young men and women of color in this country who just so eloquently described, have witnessed too much violence and too much debt. too often, some of that violence has come from folks who were supposed to be serving and protecting you. I want you to know that you matter. I want you to know that your lives matter, that your dreams matter. When I go home and I look at the faces of my daughters, Sasha and Malia, and I look at my nephews and nieces, I see limitless potential that deserves to flourish and thrive. You should be able to learn and make mistakes and live a life of joy without having to worry about what’s going to happen when you walk to the store or go for a jog or are driving down the street or looking at some birds in a park.

I hope that you also feel help hopeful, even as you may feel angry, because you have the power to make things better and you have helped to make the entire country feel as if this is something that’s got to change. You’ve communicated a sense of urgency that is as powerful and as transformative as anything that I’ve seen in recent years.

I want to acknowledge the folks in law enforcement that share the goals of re-imagining police, because there are folks out there who took their oath to serve your communities and your countries, have a tough job, and I know you’re just as outraged about tragedies in recent weeks as are many of the protesters. We’re grateful for the vast majority of you who protect and serve. I’ve been heartened to see those in law enforcement who’ve recognized, let me March along with these protestors, let me stand side by side and recognize that I want to be part of the solution and who’ve shown restraint and volunteered and engaged and listened, because you’re a vital part of the conversation. Change is going to require everybody’s participation.

Now, when I was in office, as was mentioned, I created a task force on 21st century policing in the wake of the tragic killing of Michael Brown. That task force, which included law enforcement and community leaders and activists was charged to develop a very specific set of recommendations to strengthen public trust and foster, better working relationships between law enforcement and communities that they’re supposed to protect, even as they’re continuing to promote effective crime reduction. That report showcased a range of solutions and strategies that were proven and that were based on data and research to improve community policing and collect better data and reporting and identify and do something about implicit bias and how police were trained and reforms to use the force that police deploy in ways that increase safety rather than precipitate tragedy. That report demonstrated something that’s critical for us today.

Most of the reforms that are needed to prevent the type of violence and injustices that we’ve seen take place at the local level. Now reform has to take place in more than 19,000 American municipalities, more than 18,000 local enforcement jurisdictions. As activists and everyday citizens raised their voices, we need to be clear about where change is going to happen and how we can bring about that change. It is mayors and county executives that appoint most police chiefs and negotiate collective bargaining agreements with police units, and that determines police practices in local communities. It’s district attorneys and state’s attorneys that decide typically whether or not to investigate and ultimately charge those involved in police misconduct. Those are all positions. In some places they’re police community review boards with the power to monitor police conduct. Those oftentimes may be elected as well.

The bottom line is, I’ve been hearing a little bit of chatter in the internet about voting versus protest, politics and participation versus civil disobedience and direct action. This is not a either/or this is a both/and. To bring about real change, we both have to highlight a problem and make people in power uncomfortable, but we also have to translate that into practical solutions and laws that can be implemented and we can monitor and make sure we’re following up on.

WHAT CAN BE DONE

Very quickly, let me just close with a couple of specific things. What can we do?

Number one, we know there are specific evidence-based reforms that if we put in place today would build trust, save lives, would not show an increase in crime. Those are included in the 21st-century policing task force report. You can find it on Obama.org.

Number two, a lot of mayors and local elected officials read and supported the taskforce report, but then there wasn’t enough follow through. Today, I am urging every mayor in this country to review your use of force policies with members of your community and commit to report on planned reforms. What are the specific steps you can take?

I should add, by the way, that the original task force report was done several years ago, since that time we’ve actually collected data, in part because we implemented some of these reform ideas, so we now have more information and more data as to what works. There are organizations like Campaign Zero and Color Of Change and others that are out there highlighting what the data shows, what works, what doesn’t in terms of reducing incidents of police misconduct and violence. Let’s go ahead and start implementing those. We need mayors, county executives, others who are in positions of power to say this is a priority. This is a specific response.

Number three, every city in this country should be a My Brother’s Keeper community because we have 250 cities, counties, tribal nations who are working to reduce the barriers and expand opportunity for boys and young men of color through programs and policy reforms, public private partnerships. Go to our website, get work with that, because it can make a difference.

Let me just close by saying this, I’ve heard some people say that you have a pandemic, then you have these protests. This reminds people of the ’60s and the chaos and the discord and distrust throughout the country. I have to tell you, although I was very young when you had riots and protests and assassinations and discord back in the ’60s, I know enough about that history to say there is something different here.

You look at those protests and that was a far more representative cross-section of America out on the streets peacefully protesting, and who felt moved to do something because of the injustices that they had seen. That didn’t exist back in the 1960s, that kind of broad coalition. The fact that recent surveys have showed that despite some protests having then been marked by the actions of some, a tiny minority that engaged in violence, as usual that got a lot of attention and a lot of focus, despite all that a majority of Americans still think those protests were justified. That wouldn’t have existed 30, 40, 50 years ago. There is a change in mindset that’s taking place, a greater recognition that we can do better. That is not as a consequences speeches by politicians. That’s not the result of spotlights in news articles. That’s a direct result of the activities and organizing and mobilization and engagement of so many young people across the country who put themselves out on the line to make a difference.

I just have to say thank you to them and for helping to bring about this moment and just make sure that we now follow through, because at some point attention moves away, at some point protests start to dwindle in size. It’s very important for us to take the momentum that has been created as a society, as a country, and say let’s use this to finally have an impact.

All right. Thank you, everybody. Proud of you guys. I know that we’re going to be hearing from a bunch of people who have been on the front lines on this and know a lot more than I do about it. Proud of you.