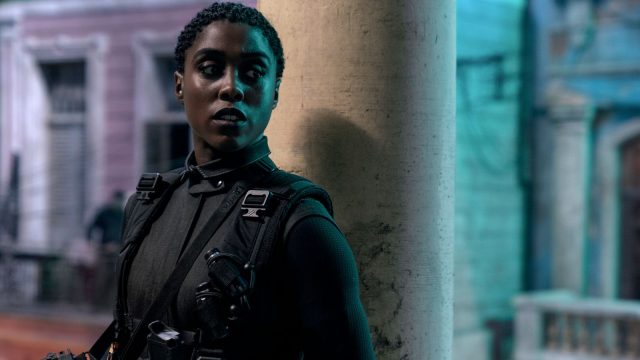 Lashana Rasheda Lynch is a British actress, previously best known for playing the role of Rosaline Capulet in the ABC period drama series Still Star-Crossed (2017) and fighter pilot Maria Rambeau in Captain Marvel (2019). She was also noted for her spell in Bullet Proof, the Sky Series with Noel Clark and Ashley Walters.

Bulletproof is a British police procedural series, created by and starring Noel Clarke and Ashley Walters, that first broadcast on Sky One on 15 May 2018. The series followed NCA detectives, and best friends, Aaron Bishop (Clarke) and Ronnie Pike Jr. (Walters), who investigate some of the country’s most dangerous criminals, including traffickers, drug dealers and armed robbers, whilst being overseen by their boss Sarah Tanner (Lindsey Coulson – formerly an Eastenders actress).

Lashana played the wife of Ashley Walters, so as such did not get involved in any of the action parts of the series. Having seen her in Bond now, perhaps Bullet Proof producers missed a trick – and would be well advised to revive the series with Lashana teaming up with her husband in replacement for Noel Clark.

This new Bond has everything. Suspense, a great story, strong villain, and diversity. Lashana sparkles in every scene she appears it – and I must admit – I might not have rushed out to see this during a pandemic if Lashana had not been in it. I would have happily waited till the cinemas become empty during its showing, or waited until it appeared on TV. Yep – I’ve got patience.

To realise she had the same Agent number 007 – mades the eyes of blacks and culture lovers around the world glaze over with excitement and anticicpation. Could this be the shape of things to come from Lashana in Future Bonds? We dream on.

But you know they will find a man to replace Daniel Craig.

As all eyes focus on Daniel Craig’s final outing as the Martini-swigging secret agent in the latest James Bond movie No Time To Die, the film also marks a shift in how women characters are perceived.

Bond is no longer the womanising, gun-toting secret agent that previous iterations of the character may have portrayed him as – instead he is now in a (as stable as a secret agent can have) relationship and is working to save the world with Lashana Lynch as 007.

For Lynch, who plays new character Nomi, she feels that Daniel Craig has “shifted” the Bond franchise for the better when it comes to these conversations, and that her inclusion is a sign of progression.

“The fact that [Nomi] was even an idea in the first place is just a reflection of where we are in the world, where we are continuing to go, but also where the franchise is,” she told Sky News.

“And it would be a shame not to do that – so they’re doing exactly the right thing, and I think they’ll continue to do that in the future.”

Nomi has taken over Bond’s agent number of 007, after the secret agent decided to step back from active duty, meaning Lynch is playing a full-blown MI6 officer.

And while the future of MI6 looks to be in good hands – the role of the traditional ‘Bond girl’ has also seen a shift.

No longer do Bond’s romantic conquests only last one film, with French actress Lea Seydoux returning to the franchise as Dr Madeleine Swann from Spectre.

Seydoux told Sky News: “I think that the James Bond films have always been quite relevant on the world.

“Bond has really changed with Daniel, in the sense that he’s less ‘misogyne’ (French for misogynist).

“It’s the first time that a female character is coming back – we get to know her and we get to know Madeleine in No Time To Die… so I think that in that sense, it’s much more interesting.”

There is plenty of talk about who the next Bond might be, and while speculation swirls that the franchise could continue with a woman at the helm – Seydoux thinks that could be a bad idea.

“I don’t think James Bond should be played by a woman.

“It’s important for young girls… to have a good example of strong women – maybe they could do a female spy, but it would be another film.” Enter Lashana….. Film makers take note. Lashana needs to be in 3 movies a year for the next ten years – and look out for other capably black women who can light up the screen.