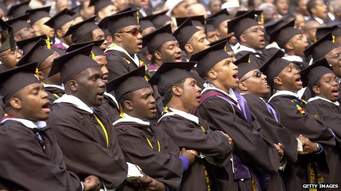 A 50-state report from the Schott Foundation for Public Education has come to a dispiriting conclusion: public education is failing black male students. Nationwide, the graduation rate for this demographic of students is a paltry 47 percent. And in some major cities, it’s perilously low—in New York City and Philadelphia, for example, only 28 percent of black males complete high school on time.

New York state has the worst overall graduation rate for black males at 25 percent. On the other end of the spectrum, amongst states with at least 100,000 black male students in their public schools, New Jersey is able to get nearly 70 percent of these kids through high school on time.

The Schott Foundation assigns some of New Jersey’s success to its Abbott Plan for getting disadvantaged kids into early childhood education programs. I might be wrong here, but I believe that program did not begin until 1999; thus, it likely did not affect many of the students who graduate in 2007-2008 school year, which was the one measured by the report. Still, the city of Newark, at 76 percent, boasts the highest graduation rate in the country for black males, at 76 percent.

The data provided in the report, says Schott Foundation CEO John Jackson, is intended to point in the direction where education reform needs to head: toward creating “educationally sound” policy to level the playing field when it comes to learning.

Unsurprisingly, the Schott Foundation was one of the civil rights groups that warned the Obama’s administration that its Race to the Top program would not result in “equal education for all.” You can see the state-by-state results of its study at The Schott 50 State Report on Black Males and Education site.

Mr. Ponder, I think you put the most important item too low on your “comprehensive approach” list. Parenting support is number one in what makes children excel. I’m not sure it’s public education that is failing black male students as much as it’s the lack of that support. Not to say that blacks in America are bad parents, I just think they are over worked. It’s a bit of a sad catch-22, the percentages of single parent households are higher in the black community, so the single mothers often work multiple jobs, so they have less time to keep an eye on their sons, so they don’t do as well in school, so they drop out, so they become deadbeat dads or inmates with children that they don’t take care of. It’s a shame. But I’m pretty sure public education cannot fix it. (ScottCook)

Why Your Startup Needs an ePOS System

Prince George’s County was a symbol of African American prosperity. Then came the housing...