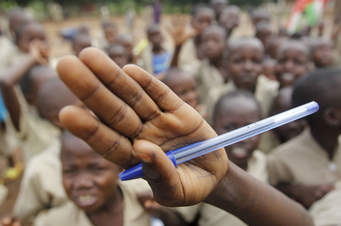 771 million adult people world wide do not have the basic knowledge in reading, writing and calculation More than 100 million children do not have access to school and this limitation will determine their lives.

Education is a key tool in order to reduce the vulnerable position of millions of people in the world. Education enables job opportunities, self esteem and social awareness for change.

However, many in the West do not realise the privilege they have in terms of free accessible education.

Is the education of a nation actually getting worse? Are children less educated than their parents were at their age? Its sad to see teens drop out of school at age 13 or 14, not caring about the consequences. They get involved with drink, drug, sex, gangs, and think they know what is best. Some are hooked on these things from as early as 12 years old.

If disaffected children do attend school, they are disruptive, loud, abusive, and in some cases violent. They will make a point of not listening to the teacher. They will walk out of classrooms without permission. They will throw things across the room, including chairs. They will walk across the room. They will walk across chairs. They will crawl under tables. They will throw things out of the window. Some attend school drunk or stoned, having availed themselves with alcohol or drugs before stepping foot inside the school gates. Or some will bring a stash with them, to feed their habit in the toilets. It can be a daily battle zone for some of these poor teachers who are trying to control them. There really a no sanctions one can place on these children which will be effective, because, ultimately they do not want to be in school. They do not care about education. And will go off to celebrate if they are excluded from school.

Have you seen the series “Waterloo Road” recently.

A big problem, mostly overlooked, is the quality of the education the students receive in school. Many schools today are still in the same rut of teaching the same standards for many years because they are resistant to change. Although, many adults believed it to be adequate enough for their children to learn the same education the received, the opinion for change in standards seems to be on the rise. Today, youth need higher standards to compete with skillful and technical careers.

Times have changed. With the advent of new technologies, and new distractions, educational methods have not kept pace. Higher qualifications are needed for many jobs. There used to be a time you could get a job in a bank, or even teach with no exams in Maths and English. Now that is not the case.

When business owners were asked to comment on new high school graduates, they complained particulary that they lack basic math, writing, grammar, and spelling skills. Six out of ten parents agree that academic standards are too low in their local communities. Why this is the case? It could stem from numerous items. One is safety and order of our public school. Some schools have become so disorderly, violent, and undisciplined that learning simply cannot take place. Some aspects include: violent gun confrontations and threats, major drug abuse, fights, and poor teaching.

All of these violent accounts are justifiably brought about by parental neglect. In a recent survey conducted by the YMCA, 78% of youth indicated that they turn to their parents for guidance and in times of need. More and more teens see to it that family time is a top priority – which is great news. But those teens who recieve little or no parental involvement, tend to lead a more chaotic life than those who do. If they do not have good adult influence or good teachers to substitute the correct guidance, they believe the theory that education is not going to help them, and there is no point even trying. The discipline that comes from education not only teaches facts and methods, it helps youths to understand the routine of getting up and attending a place of work, or study which they will need later in life.

To better understanding teens, many teachers now seem to have a closely knit relationship between teacher and student. I notice that some teachers take the parental role with some students and that helps them have better aspirations. This relationship lets youth have more confidence, a sense of power, belonging, and usefulness.

You can tell the education of a person within two minutes of speaking to them. You can tell their general knowledge; their range of vocabulary, and if they have a limited life experience.

Ignorance is not bliss. Fortunately, some young people find this out later on in life, and return to college to do what they should have done at school. Typically, they will still be years behind their peers who gained their qualifications at 16 to 18. But hey, better late than never. They usually rue the wasted years though, when they land in university in a class of 18 year olds, when they are 25 say. Or they are in a job, and some young upstart is their boss.