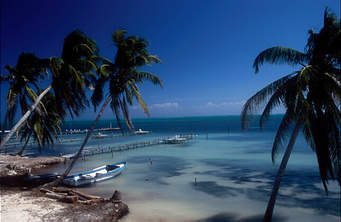 The rankings are based on each country’s Gross Gross Domestic Product (GDP) per capita. GDP is on a purchasing power parity basis divided by population

(1) Bermuda
Bermuda enjoys the third highest per capita income in the world, more than 50% higher than that of the US; the average cost of a house by the mid-2000s exceeded $1,000,000. Its economy is primarily based on providing financial services for international business and luxury facilities for tourists. A number of reinsurance companies relocated to the island following the 11 September 2001 attacks and again after Hurricane Katrina in August 2005 contributing to the expansion of an already robust international business sector. Bermuda’s tourism industry – which derives over 80% of its visitors from the US – continues to struggle but remains the island’s number two industry. Most capital equipment and food must be imported. Bermuda’s industrial sector is largely focused on construction and agriculture is limited, with only 20% of the land being arable.

————————————————-
(2) Cayman Islands
With no direct taxation, the islands are a thriving offshore financial center. More than 93,000 companies were registered in the Cayman Islands as of 2008, including almost 300 banks, 800 insurers, and 10,000 mutual funds. A stock exchange was opened in 1997. Tourism is also a mainstay, accounting for about 70% of GDP and 75% of foreign currency earnings. The tourist industry is aimed at the luxury market and caters mainly to visitors from North America. Total tourist arrivals exceeded 1.9 million in 2008, with about half from the US. About 90% of the islands’ food and consumer goods must be imported. The Caymanians enjoy one of the highest outputs per capita and one of the highest standards of living in the world.

(3) British Virgin Islands
The economy, one of the most stable and prosperous in the Caribbean, is highly dependent on tourism generating an estimated 45% of the national income. More than 934,000 tourists, mainly from the US, visited the islands in 2008. In the mid-1980s, the government began offering offshore registration to companies wishing to incorporate in the islands, and incorporation fees now generate substantial revenues. Roughly 400,000 companies were on the offshore registry by yearend 2000. The adoption of a comprehensive insurance law in late 1994, which provides a blanket of confidentiality with regulated statutory gateways for investigation of criminal offenses, made the British Virgin Islands even more attractive to international business. Livestock raising is the most important agricultural activity; poor soils limit the islands’ ability to meet domestic food requirements. Because of traditionally close links with the US Virgin Islands, the British Virgin Islands has used the US dollar as its currency since 1959.

(4) Bahamas
The Bahamas is one of the wealthiest Caribbean countries with an economy heavily dependent on tourism and offshore banking. Tourism together with tourism-driven construction and manufacturing accounts for approximately 60% of GDP and directly or indirectly employs half of the archipelago’s labor force. Prior to 2006, a steady growth in tourism receipts and a boom in construction of new hotels, resorts, and residences led to solid GDP growth but since then tourism receipts have begun to drop off. The global recession in 2009 took a sizeable toll on the Bahamas, resulting in a contraction in GDP and a widening budget deficit. The decline continued in 2010 as tourism from the US and sector investment lagged. Financial services constitute the second-most important sector of the Bahamian economy and, when combined with business services, account for about 36% of GDP. However, the financial sector currently is smaller than it has been in the past because of the enactment of new and more strict financial regulations in 2000 that caused many international businesses to relocate elsewhere. Manufacturing and agriculture combined contribute approximately a tenth of GDP and show little growth, despite government incentives aimed at those sectors. Overall growth prospects in the short run rest heavily on the fortunes of the tourism sector

(5)Trinidad and Tobago
Trinidad and Tobago has earned a reputation as an excellent investment site for international businesses and has one of the highest growth rates and per capita incomes in Latin America. Economic growth between 2000 and 2007 averaged slightly over 8%, significantly above the regional average of about 3.7% for that same period; however, GDP has slowed down since then and contracted about 3.5% in 2009, before rising more than 2% in 2010. Growth has been fueled by investments in liquefied natural gas (LNG), petrochemicals, and steel. Additional petrochemical, aluminum, and plastics projects are in various stages of planning. Trinidad and Tobago is the leading Caribbean producer of oil and gas, and its economy is heavily dependent upon these resources but it also supplies manufactured goods, notably food products and beverages, as well as cement to the Caribbean region. Oil and gas account for about 40% of GDP and 80% of exports, but only 5% of employment. The country is also a regional financial center, and tourism is a growing sector, although it is not as important domestically as it is to many other Caribbean islands. The economy benefits from a growing trade surplus. The previous MANNING administration benefited from fiscal surpluses fueled by the dynamic export sector; however, declines in oil and gas prices have reduced government revenues which will challenge the new government’s commitment to maintaining high levels of public investment.

(6) Aruba
Tourism is the mainstay of the small open Aruban economy, together with offshore banking. Oil refining and storage ended in 2009. The rapid growth of the tourism sector over the last decade has resulted in a substantial expansion of other activities. Over 1.5 million tourists per year visit Aruba with 75% of those from the US. Construction continues to boom with hotel capacity five times the 1985 level. Tourist arrivals rebounded strongly following a dip after the 11 September 2001 attacks. The government has made cutting the budget and trade deficits a high priority.

(7) Barbados
Historically, the Barbadian economy was dependent on sugarcane cultivation and related activities. However, in recent years the economy has diversified into light industry and tourism with about three-quarters of GDP and 80% of exports being attributed to services. Growth has rebounded since 2003, bolstered by increases in construction projects and tourism revenues, reflecting its success in the higher-end segment, but the sector faced declining revenues in 2009 with the global economic downturn. The country enjoys one of the highest per capita incomes in the region. Offshore finance and information services are important foreign exchange earners and thrive from having the same time zone as eastern US financial centers and a relatively highly educated workforce. The government continues its efforts to reduce unemployment, to encourage direct foreign investment, and to privatize remaining state-owned enterprises. The public debt-to-GDP ratio rose to over 100% in 2009, largely because a sharp slowdown in tourism and financial services led to a wide budget deficit

(8) Antigua and Barbuda
Tourism continues to dominate Antigua and Barbuda’s economy, accounting for nearly 60% of GDP and 40% of investment. The dual-island nation’s agricultural production is focused on the domestic market and constrained by a limited water supply and a labor shortage stemming from the lure of higher wages in tourism and construction. Manufacturing comprises enclave-type assembly for export with major products being bedding, handicrafts, and electronic components. Prospects for economic growth in the medium term will continue to depend on tourist arrivals from the US, Canada, and Europe and potential damages from natural disasters. After taking office in 2004, the SPENCER government adopted an ambitious fiscal reform program, and was successful in reducing its public debt-to-GDP ratio from 120% to about 90% in 2008. However, the global financial crisis that began in 2008, has led to a significant increase in the national debt, which topped 130% at the end of 2010. The Antiguan economy experienced solid growth from 2003 to 2007, reaching over 12% in 2006 driven by a construction boom in hotels and housing associated with the Cricket World Cup, but growth dropped off in 2008 with the end of the boom. In 2009, Antigua’s economy was severely hit by the global economic crisis, suffering from the collapse of its largest financial institution and a steep decline in tourism. This decline continued in 2010 as the country struggled with a yawning budget deficit.

(9) Curacao
Tourism, petroleum refining, and offshore finance are the mainstays of this small economy, which is closely tied to the outside world. Although GDP grew slightly during the past decade, the island enjoys a high per capita income and a well-developed infrastructure compared with other countries in the region. Curacao has an excellent natural harbor that can accommodate large oil tankers. The Venezuelan state oil company leases the single refinery on the island from the government; most of the oil for the refinery is imported from Venezuela; most of the refined products are exported to the US. Almost all consumer and capital goods are imported, with the US, Brazil, Italy, and Mexico being the major suppliers. The government is attempting to diversify its industry and trade and has signed an Association Agreement with the EU to expand business there. Poor soils and inadequate water supplies hamper the development of agriculture. Budgetary problems complicate reform of the health and pension systems for an aging population.

(10) US Virgin Island
Tourism is the primary economic activity, accounting for 80% of GDP and employment. The islands hosted 2.4 million visitors in 2008. The manufacturing sector consists of petroleum refining, rum distilling, textiles, electronics, pharmaceuticals, and watch assembly. One of the world’s largest petroleum refineries is at Saint Croix. The agricultural sector is small, with most food being imported. International business and financial services are small but growing components of the economy. The islands are vulnerable to substantial damage from storms. The government is working to improve fiscal discipline, to support construction projects in the private sector, to expand tourist facilities, to reduce crime, and to protect the environment.