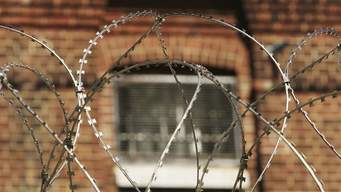 Would it not be cheaper to find that person a job, and take back half their earnings through taxes?

By Jasmin K. Williams, Special to the NNPA from the New York Amsterdam News –

Education over incarceration is the message of a report released by the NAACP. The nation’s oldest civil rights organization is challenging America to re-evaluate its spending priorities in the report, titled “Misplaced Priorities: Under Educate, Over Incarcerate,” which was introduced at the National Press Club in Washington, D.C. In it, the NAACP calls attention to the proven fact that excessive spending on housing prisoners undermines education and public safety.

This message will be reiterated in a forthcoming billboard campaign (see below) calling out the fact that one-fourth of the world’s prisons are located in America, while the country accounts for just five percent of the world’s population overall. In short, America’s “tough on crime” policies have failed.

Not surprisingly, most of those housed in the prison system—some 2.3 million—are people of color. Half of all state and federal prisoners meet the criteria for drug abuse or dependency. These inmates would be better served with treatment programs, a more successful and economical alternative to incarceration. It costs money to sustain the prison system—lots of it. The NAACP says that this money can and must be better spent.

Bronx District Attorney Robert T. Johnson said, “I have always been of the mind that, in the long run, if we want to get a handle on crime, we must commit to improving education and job opportunities. Prevention and rehabilitation have to go hand in hand with deterrence.”

Here are some facts from the report:

•In 2009, as the nation’s economy collapsed into depression, funding for K-12 and higher education fell while 33 states put more money into prisons than they had the previous year.

•The Pew Center on the States found that five states spent as much or more on prisons as they did on education, and that 28 states were spending 50 cents on prisons for every dollar spent on education.

•The cost of just two years of incarceration is staggering; by 2010, taxpayers in Texas will spend $175 million on prisoners sentenced in 2008 from 10 of Houston’s 75 neighborhoods, 10 percent of the city’s population. In Pennsylvania, the cost is $290 million to imprison residents from 11 neighborhoods. New York will spend more than half a billion dollars—$539 million—to imprison residents from 24 neighborhoods. While these inmates represent a mere 16 percent of the city’s adult population, the state will exhaust nearly half of its $1.1 billion budget to incarcerate them.

•These high levels of incarceration have a direct impact on education performance in these communities; in Los Angeles, 67 percent of the lowest-performing schools are in neighborhoods with high incarceration rates. In Texas, the rate is 83 percent while in Philadelphia the rate is 66 percent.

With these facts on the table, the NAACP has called for a downsizing of the prison system and for those funds to be reinvested in education.

“The first stage is to move beyond ‘tough-on-crime policies’ that have been a proven failure and adopt ‘smarter crime’ policies that have been a proven success,” said NAACP President and CEO Benjamin Todd Jealous. “The state of New York has been going down this road for a while, most recently with the evisceration of the Rockefeller Drug Laws last year. But, it’s a trend that’s needed in states throughout the country.

“Over the past decade, New York’s prison population has fallen and crime has gone down about 16 percent, while in Florida the prison population has continued to rise precipitously during that same time and crime has gone up about 16 percent. You can find experiences like that across the country that really debunk this myth that took hold in the ’90s that the best way to reduce crime was to warehouse criminals and law violators, no matter how small the infraction, or how nonviolent the crime,” Jealous told the Amsterdam News. “The first goal is to shift states from failed policies that have resulted in the mass incarceration of citizens toward proven policies that tend to incarcerate less, cost less, and make us safer. We call those smarter crime policies.

“The second is to send the savings to the public university system and the public education system more generally,” he said.

“As you look across the country at various states over the past three to four decades, state prison systems developed these ‘tough-on-crime’ policies that resulted in over incarceration. You see the percentage of the state budget devoted to prisons go up and the percentage devoted to paying for public higher education go down.

“In California, where I grew up in the 1970s, the state spent 3 percent of its budget on incarceration and 11 percent on education. Last year, the state spent 11 percent on incarceration and only 7.5 percent on public higher education. That trend is repeated across the country. When Pennsylvania was faced with a budget crisis, the state took $300 million out of its public education budget and added $300 million to its budget for jails and prisons in a single budget year,” said Jealous.

“Georgia has the fifth largest penal system in the country, three-quarters of whom are low-level, nonviolent drug offenders—the No. 1 source of the prison population, both in growth rate and size over the last three decades. This is why states like New York and others are shifting the priority from incarceration to treatment. South Carolina took that step last year. For example, people convicted for possessing crack are treated the same as those convicted of possessing powdered cocaine, something that the U.S. Congress hasn’t even been able to do,” he continued.

“This moment is exciting for a few reasons. There’s a lot of financial pressure on states. Every decision is a tough one and every decision related to the criminal justice system is now getting full attention in a way that they often don’t. This comes from people on both sides of the aisle as officials look for ways to creatively cut budgets and are willing to do tough things to accomplish that,” said Jealous.

“It’s also exciting because we’ve reached a point where we’ve tried so many ways to deal with the increase of drug abuse in the country and the perceived increase in crime although, in actual terms, crime has fallen in many places. It’s the consensus that these things have failed. People on both sides of the aisle are now willing to look at the evidence and really embrace what works. It worked in New York. It worked in South Carolina. It worked in Virginia, where the governor actually shrank down the number of prisons and increased a portion of his budget devoted to historically Black colleges. In these times when there is so much partisanship, this is a place where bipartisanship is really possible,” Jealous said.

On the implementation of this plan, Jealous said: “If you have a state that is taking this on for the first time, like Georgia is right now, the first thing to do is to impanel a commission to look at the state’s criminal justice system from top to bottom—law enforcement strategies, sentencing strategies and re-entry strategies—and to prioritize writing legislation to replace failed policies with ones that are proven to make us safer. That tends to result in policies that cost less in the way that rehab costs less than incarceration, or in the way that a halfway house, as a first step to re-entry, costs less than incarceration.”

“For decades, law enforcement has been operating on a broken window theory: The best way to stop a more serious crime from occurring is to focus on the smallest infractions in a community. It ultimately is inefficient and ineffective,” he explained.

“The city of Los Angeles is notorious for its aggressive police practices—anything from jaywalking on up. Last year, it was revealed that they had 12,000 unopened rape kits that hadn’t even been processed. There is a need for the public to take an interest in this. Catching violent criminals should be job one, and in many instances that’s just not the case in most departments. The ideal is to focus on what works and what makes us safe. We are calling on states to put together commissions to focus on what works and propose a series of reforms,” Jealous concluded.