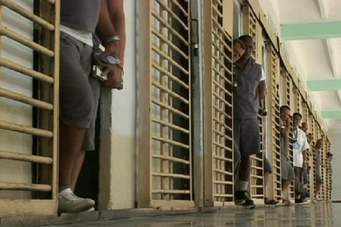 Mass Black incarceration is a kind of “punitive backlash” against the gains of the Sixties, and only a “a major social movement” can challenge it. Nowhere on the planet is mass imprisonment more entrenched than in the United States. “The U.S. imprisons more than South Africa did under apartheid.” At every stage of the criminal justice system, Blacks are selected for harsher treatment. “In major urban areas almost one-half of black men have criminal records.”

Many Employers will not accept anyone with a criminal record. Their economic status is then stunted forever.

“Blacks leaders allowed this incarceration to happen by doing too little to challenge this repression.”

Herman Garner doesn’t dispute the drug charge that slammed him in prison for nine years.
Garner does dispute the damning circumstance that doing the time for his crime still leaves him penalized despite his having ended his sentence in the penal system.
Garner carries the “former felon” stain.
That status slams employment doors shut in his face despite his having a MBA Degree and two years of law school.
“I’ve applied for jobs at thousands of places in person and on the internet, but I’m unable to get a job,” said Garner, a Cleveland, Ohio resident who recently published a book about his prison/life experiences titled Wavering Between Extremes.

Recently Garner joined hundreds of people attending a day-long conference at Princeton University entitled “Imprisonment Of A Race,” that featured presentations by scholars and experts on the devastating, multi-faceted impact of mass incarceration across America.

The U.S. imprisons more people per capita than any country on earth, accounting for 25 percent of the world’s prisoners, despite having just five percent of the world’s population.
America currently holds over two million in prisons with double that number under supervision of parole and probation, according to federal government figures.

Under federal law persons with drug convictions like Garner are permanently barred from receiving financial aid for education, food stamps, welfare and publicly funded housing.
But only drug convictions trigger these exclusions under federal law. Violent bank robbers, white-collar criminals like Wall Street scam artists who steal billions, and even murderers who’ve done their time do not face the post-release deprivations slapped on those with drug convictions on their records, including those imprisoned for simple possession, and not major drug sales.
“Academics see this topic of mass incarceration as numbers, but for millions it is their daily lives,” said Princeton conference panelist Dr. Khalilah Brown-Dean of Yale University.

Exclusions mandated by federal laws compound the legal deprivations of rights found in the laws of most states, such as barring ex-felons from jobs and even stripping ex-felons of their right to vote.

“Mass incarceration raises questions of protecting and preserving democracy,” Dr. Brown-Dean said, citing the estimated five-million-plus Americans barred from voting by such felony disenfranchisement laws.
Many of those felony disenfranchisement laws date from measures enacted in the late 1800s which were devised specifically to bar blacks from voting, as a way to preserve America’s apartheid.

During the 2000 presidential election Republican officials in Florida fraudulently manipulated that state’s anti-felon voting law to bar tens of thousands of blacks from voting. For example, many people with common names like John Smith who shared their name with a felon were also barred from voting, despite having clear records. Yet George W. Bush won by Florida – the state where his brother Jeb served as Governor – by 537 votes. That victory in the state where George W.’s brother Jeb served as governor sent him to the White House.

Policies creating barriers to things like education and employment make it “increasingly difficult” for persons recently released from prison to “remain crime-free” according to a report released earlier this year by the Smart on Crime Coalition.
More than 60 percent of the two-million-plus people in American prisons are racial and ethnic minorities.
“The U.S. imprisons more than South Africa did under apartheid. A nation that promotes democracy has a racial caste in its prisons. We must break that caste system,” said the special guest speaker at the “Imprisonment” conference, Pennsylvania Death Row Journalist Mumia Abu-Jamal, who telephoned from prison.

Racism is written all over the economically/socially debilitating practices embedded in mass incarceration.
A recent University of Wisconsin study found that 17 percent of white ex-con job seekers received interviews, compared to only five percent of black ex-con job seekers – a race-based disparity that is additionally devastating for people of color like Garner.
“Republican officials in Florida fraudulently manipulated that state’s anti-felon voting law to bar tens of thousands of blacks from voting.”

Ohio State University Law Professor Michelle Alexander, the featured speaker at that Princeton conference streamed live on the internet, said a major reason why imprisonment rates soared during the past four decades despite decreases in crime rates is anti-crime policies craftily manipulated by conservative Republican officials for political purposes.
Harsh anti-crimes policies of the 1970s and 1980s were largely a “punitive backlash” to advances of the Civil Rights Movement, said Alexander, author of the hugely popular 2010 book The New Jim Crow: Mass Incarceration in the Age of Colorblindness.
Pennsylvania’s prison population, for example, soared from 8,243 in 1980 to 51,487 in 2010, while the California prison population leapt during the same period from 23,264 to over 170,000.

Incarceration costs are particularly obscene when compared to college costs.
A report released in January 2011 by Pennsylvania’s auditor general that noted the Keystone State now spends $32,059 annually to imprison one person…a cost that exceeds the annual $20,074 tuition for the MBA degree program at Penn State University.
A report released in January 2010 by a UCLA professor noted that the Golden State spends over $48,000 annually to imprison one person, more than four times the tuition cost of UCLA for a California resident. Back in 1980, California spent more of its state budget on higher education than on prisons, but that had reversed by 2010, with more of that state’s budget going for prisons than for higher education.

Africa-Americans are 13 percent of America’s population and 14 percent of the nation’s drug users but are 37 percent of persons arrested for drugs and 56 percent of the inmates in state prisons for drug offenses, noted the 2009 congressional testimony of Marc Mauer, executive director of the Sentencing Project and a conference panelist.

Both ex-felon Herman Garner and Dr. Eddie Glaude Jr., chair of Princeton’s Center for African American Studies, which hosted the conference, expressed similar views on the impacts of mass incarceration.
“A black child today is less likely to be raised in a two-parent household than during slavery.”
Dr. Glaude said mass incarceration is a “moral crisis with political and social consequences for America’s future,” during his remarks opening the conference.
Garner, in an interview, described the US prison system as the “biggest problem” in the American black community.

Famed Princeton Professor Dr. Cornell West criticized both the black middle class and black leadership for inaction on mass incarceration.
“The new black middle class and black leadership are not attuned to the suffering in poor black communities,” West said during the conference’s Keynote Conversation between him and Professor Alexander.
“We need more middle-class people with genuine respect for the poor. This is more than serving as role model mentors,” he said.
Author Alexander said ending the “mind-boggling scale” of mass incarceration requires “a major social movement.”
“Middle-class whites and blacks in the U.S. are a new kind of ‘Silent Majority’ regarding mass incarceration.”

One attendee at the Princeton conference, Daryl Brooks, an activist in Trenton, NJ who operates the popular “Today’s News N.J.” blog, backs Alexander’s suggestion.
“To fix this problem we need mass boycotts. America only understands money and violence. We need to shutdown businesses like during the 60s,” said Brooks, who spent three-years in prison for a conviction he says was false and aimed at crushing his activism.
“Blacks leaders allowed this incarceration to happen by doing too little to challenge this repression,” he said.

The Obama Administration is doing too little to address mass incarceration and its impacts, many of the Princeton panelists and conference attendees agreed. These critics blast the Obama Administration for what they called its tepid approaches to the torturous scourge of 240 sexual assaults daily in state and federal prisons, charging it with foot-dragging on the Prison Rape Elimination Act which was approved by Congress during the administration of George W. Bush.

While Obama fulfilled a campaign pledge to address the sentencing disparity penalizing powder cocaine more harshly than crack cocaine (a drug derived from powder cocaine), Obama’s preference for bipartisan consensus has resulted in legislation that lower but did not eliminate the disparity. That legislation did not apply retroactively, thus failing to mitigate stiff ten-year-plus crack cocaine sentences that have already left many blacks and Hispanics languishing in federal prisons.

“Obama and [US Attorney General Eric] Holder have no courage when it comes to the prison-industrial complex,” said Dr. Cornell West.