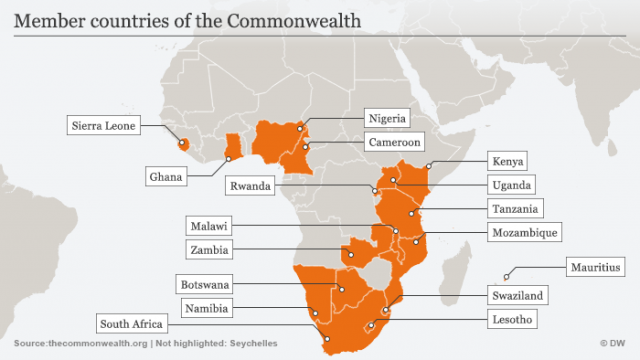 ‘Not worth it anymore!’ HAMMER BLOW for Juncker as nations dump EU trade deals post-Brexit
By NICK GUTTERIDGE
First published: Thu, Sep 22, 2016
DEVELOPING countries are set to dump controversial trade agreements with the European Union en masse following the Brexit vote, leading economists have said.
If there is ever a time for the UK to appreciate the Commonwealth – now is the time.  Be guaranteed that the next Commonwealth Conference in April will be a time of smoozing  and love-ins.  Britain needs Africa and the rest of the Commonwealth more than ever.
The EU’s trade policy is in chaos
Up and coming nations in Africa and the Caribbean will no longer see any worth in being tied to dictatorial Brussels policies now that the UK is no longer part of the bloc.
And they could be about to torpedo the EU’s roll-out of Economic Partnership Agreements (EPA), which are designed to create a free-trade zone between Europe, Africa, the
Brussels under siege as THOUSANDS march against hated EU trade deals.
‘We WON’T negotiate’ Canada refuses to budge over terms of CETA deal
That is the view of top academics Christopher Stevens and Jane Kennan, from the Overseas Development Institute, who say Brexit has given many governments an excuse to pull out of the deeply unpopular scheme.
Tanzania has already ditched a proposed deal between Brussels and the East Africa Community (ECA) countries, citing the “turmoil” engulfing the EU following the Brexit vote and the skewed terms of the agreement.
MEPs have warned the bloc is in danger of becoming irrelevant
The country’s Foreign Affairs permanent secretary Aziz Mlima blasted: “Our experts have established that the way it has been crafted, the EPA will not benefit local industries in East Africa. Instead it will lead to their destruction as developed countries are likely to dominate the market.”
And now the two trade experts have predicted that a number of other African and Caribbean countries will follow suit, because for most Commonwealth countries Britain is by far the biggest market for their exports.
In an essay on the future of Britain’s trade policy post-Brexit, the pair wrote: “Although some Africa, Caribbean and Pacific signatories have embraced the required policy changes, for many the whole EPA process remains deeply contentious.
“The post-Brexit announcement by Tanzania that it will not proceed with the East African EPA is merely the most recent example of delay and backtracking on implementation.”
A number of countries have been stalling on implementing the trade agreements, agreed as far back as 2008, over concerns about the power they will hand to Brussels to meddle in national affairs.
And the economists predicted that the Caribbean – held up as the ‘EPA poster boy’ by Brussels bureaucrats – could be the “first to split” and sink another key area of EU trade policy.
Even though Britain is no longer considered a “dominant EU importer” from Africa, Caribbean and Pacific countries it does still “absorb a significant share” of the goods those countries sell, they added.
The news comes as Europe’s much-vaunted trade clout withers away, with Brussels staggering from crisis to crisis as it tries to close out a number of flagship deals.
Brexit aftershocks: Who’s next to leave the EU?
Wed, September 14, 2016
Britain has voted to leave the EU. So who’s next? We look at which European countries want to hold their own EU referendum.
Frexit, Nexit or Auxit? Who will be next to leave the EU
Nexit: Dutch far-right Party for Freedom leader Geert Wilders pledged to make the EU membership a key issue in the next general election
Nexit: A whopping 88 per cent of people polled by a top Dutch newspaper said they would be in favour of an in/out vote along British lines
Auxit: Former right-wing Austrian Freedom Party candidate Norbert Hofer said his country should have a referendum within a year
Kaczynski said ‘The conclusion is obvious. We need a new European treaty’
Swexit: Before Brexit, Swedish MEP Peter Lundgren said Denmark and Sweden were already ‘on the brink’ of quitting, suggesting a ‘Nordic trading bloc’ led by Britain could be born.
Trade deals with both the US and Canada are on the verge of collapse following a groundswell of public opposition, whilst EU leaders have been visibly unnerved by the enthusiastic response of the international community to Britain’s pledge that it is open for business.
Member states including Germany are trying to slow down and block the Government from negotiating new free trade deals with global superpowers like the US and China before Britain formally leaves the bloc amid fears the UK may prove to be vastly more successful outside the Brussels club.
They fear that if Britain prospers as a free nation already rebellious populations could be tipped over the edge, with eurosceptic parties taking control across the continent and dismantling the federalist project.