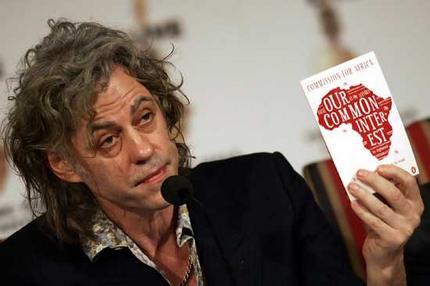 Charity, Music and Politics are not comfortable bedfellows. At least half the audience will not be happy. But does it really matter – if money will be raised anyway for a good cause. Let us examine the new Bob Geldof project.
We puzzled over the pictures from #BandAid30. Yes, it is a good cause, but why was there so little  involvement from black artists and why are the lyrics so bad?

Congratulations to Bob Geldof and his band of friends who once again have dropped everything to appear in a slightly updated version of “Do they Know it’s Christmas”. But what a song title? Of course they know. What a stupid question? It is Africa, and they do have radio, TV and the Internet. They were paying bills and each other with mobile phones, long before the UK which has just lately joined the party.
Let me emphasise “slightly” updated. Since what this song needed was a major overhaul – not tinkering at the edges. Now if Bob and his assistants had reached out to Africans, they might have avoided a song which shows their ignorance of Geography and Economics.
People are now saying the single is patronising. I reflected for a while and thought about the words. Hmmmm. Ok, I see their point.
Bob, you might say “focus on the positive”, but listen, when we look at the pictures, we do not see a harmonious bunch of multi-ethnic musicians rushing to put their voice to song. Yes, the biggest band – One Direction is there, and U2 – and many others who I am very pleased aabout. Not one of them would I have ommitted. However it smacks of the white establishment again trying to help Africa. That’s great. But why do they insist on doing it without the help of Africans. Can people not see this is a multi-cultural country that we live in. To have 3 artists among 30 singers taking part is ridiculous, when everybody knows that black music of all genres is the biggest selling music.
Do it again Bob, if you must, but next time be more inclusive. You obviously have had no diversity training, and no black friends.
But one has to give credit where it is due. The #BandAid30 project has galvanised more people to think about Ebola, talk about it, discuss and  donate. What might have been old news, is providing a stimulating debate.  The single is a success and awareness is being raised.
And how are some British people responding. Well on seeing Bob Geldorf’s colourful language on Sky News (on Monday 17th November), one person said
“Watch out he doesn’t like Mondays.”, in reference to his Geldof’s hit song with his band Boomtown Rats “I don’t like Mondays”.
“UK government has committed £225 million to the Ebola cause. What more do they want?”
“As an African, I find #BandAid30 SO patronising on SO many levels. The cheek of these people…. Smh”
And of course, there will be those who share the sentiment of the next jerk.
“Millions of Brits in abject poverty all across the North of England and once again we have to dig deep into our pockets so some darkies thousands of miles away can breed some more while some white-hating Jew from Ireland basks in the praise…sounds like a wonderful cause!”
Wow.
I wonder if there will ever be a time, when the Internet stifles Free Speech?
From Twitter, we are beginning to understand that  one black artist turned down the opportunity to take part. Fuse ODG — an English Afrobeats artist of Ghanaian descent — took to Twitter to explain why he declined the opportunity to sing on Band Aid 30′s ‘Do They Know It’s Christmas?’
Upon received the song’s proposed lyrics, Fuse “felt the message of the Band Aid 30 song was not in line with the message of The New Africa movement.”
The Washington Post writer, Laura Seay states…
“While raising money for a cause like Ebola is generally a good thing, like many who study Africa, I’m skeptical of this effort. Band Aid’s efforts betray an ignorance of Africa and perpetuate negative stereotypes and the “White Savior” narrative.”
—-
You need to listen to this Ebola song performed by Africans. Now this should be number 1.

—–
And while we are in music and politics mode, I invite you to view another video. Let me cheer you up. Check out this charity single “Africa For Norway”

Then someone responds ..
“I resent how this song portrays Norway—Only a FEW people ACTUALLY freeze to death! In a country of 5,000,000 people, how many have ACTUALLY frozen to death?
Why does western media continue to characterise an entire nation based on the deaths of a few?? this is so unfair to all those warm Norwegians who must be thinking…”huh? wah? dahfuk???”
——-
Though the 1984 original “Do they know it’s Christmas” song was recorded to raise money for Ethiopia, African critics say the stigma its simplistic message left behind affected not only that country, but a continent of 54 hugely-varied nations.
Detractors say an unintended legacy hinders investment, hurts tourism and inspires the sort of aid that has a negative impact.
There are, of course, also Africans who have no problem with it – any initiative that raises money to respond to an underfunded disaster is welcome, they say. Questions about dignity can be debated later. The money raised by One Direction, Coldplay, Bono, Ed Sheeran and others is as welcome as anybody else’s.
It’s a hard world. Sometimes good is taken out of context, and well-meaning actions become misinterpreted. in 1984 there was no internet and no outcry. Now everybody and his aunt has an opinion – and they will speak out.
I hope this will not stifle the good ideas people have. Money still needs to be raised, and however you give it – give it with willingness, for one day we all might need such help.
Anyway, Thanks Bob.  Notwithstanding the many valid criticisms, You have always had a passion to help Africa, and you got off your butt and did something about it. Kudos to you.
BlackEconomics.co.uk
18 November 2014

Etsy has said that its customers are hungry to “support black sellers” according to...

No Public Job or Wage Cuts for Antiguans