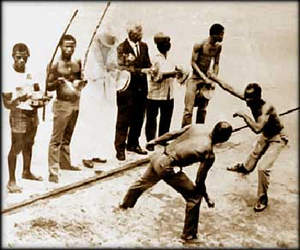 Less than 5 percent of the 11.5 million Africans wrenched into slavery ended up in the United States. That is one reason Editor-in-Chief Henry Louis Gates Jr. decided to explore the lives and cultures of blacks from Brazil to Haiti, from Peru to Mexico, in his new PBS television series.

I first learned that there were black people living somewhere in the Western Hemisphere other than the United States when my father told me the first thing he had wanted to be when he grew up. When he was a boy about my age, he said, he wanted to be an Episcopal priest because he so admired his priest at St. Philip’s Episcopal Church in Cumberland, Md., a black man from some place called Haiti.

I knew by this time that there were black people in Africa, of course, because of movies such as Tarzan and TV shows like Sheena, Queen of the Jungle and Ramar of the Jungle. And then, in 1960, when I was 10 years old, our fifth-grade class studied “Current Affairs,” and we learned about the 17 African nations that gained their independence that year. I did my best to memorize the names of these countries and their leaders, though I wasn’t quite sure why I found these facts so very appealing. But my father’s revelation about his earliest childhood ambition introduced me to the fact that there were black people living in other parts of the New World, a fact that I found quite surprising.

It wasn’t until my sophomore year at Yale, as a student auditing Robert Farris Thompson’s art-history class, the Trans-Atlantic Tradition: From Africa to the Black Americas, that I began to understand how “black” the New World really was. Professor Thompson used a methodology that he called the “tri-continental approach” — complete with three slide projectors — to trace visual leitmotifs that recurred among African, African-American and Afro-descended artistic traditions and artifacts in the Caribbean and Latin America, to show, à la Melville Herskovits, the retention of what he called “Africanisms” in the New World. So in a very real sense, I would have to say that my fascination with Afro-descendants in this hemisphere, south of the United States, began in 1969, in Professor Thompson’s very popular — and extremely entertaining and rich — art-history lecture course.

In addition, Sidney Mintz’s anthropology courses and his brilliant scholarly work on the history of the role of sugar in plantation slavery in the Caribbean and Latin America also served to awaken my curiosity about another Black World, a world both similar to and different from ours, south of our borders. And Roy Bryce-Laporte, the courageous chair of the program in Afro-American studies, introduced me to black culture from his native Panama. I owe so much of what I know about African-American culture in the New World to these three wise and generous professors.

But the full weight of the African presence in the Caribbean and Latin America didn’t hit me until I became familiar with the Trans-Atlantic Slave Trade Database, conceived by the great historians David Eltis and David Richardson and based now at Emory University. Between 1502 and 1866, 11.2 million Africans survived the dreadful Middle Passage and landed as slaves in the New World.

And here is where these statistics became riveting to me: Of these 11.2 million Africans, according to Eltis and Richardson, only 450,000 arrived in the United States. That is the mind-boggling part to me, and I think to most Americans. All the rest arrived in places south of our border. About 4.8 million Africans went to Brazil alone. So, in one sense, the major “African-American experience,” as it were, unfolded not in the United States, as those of us caught in the embrace of what we might think of as “African-American exceptionalism” might have thought, but throughout the Caribbean and South America, if we are thinking of this phenomenon in terms of sheer numbers alone.

About a decade ago, I decided that I would try to make a documentary about these Afro-descendants, a four-hour series about race and black culture in the Western Hemisphere outside of the United States and Canada. I filmed this series, Black in Latin America, this past summer, focusing on six countries — Brazil, Cuba, the Dominican Republic, Haiti, Mexico and Peru — choosing each country as representative of a larger phenomenon. This series, airing on PBS television, is the third in a trilogy that began with Wonders of the African World, a six-part series that aired in 1998. That series was followed by America Behind the Color Line, a four-part series that aired in 2004.

In a sense, I wanted to replicate Robert Farris Thompson’s “tri-continental” methodology to make, through documentary film, a comparative analysis of these cardinal points of the Black World. Another way to think of it is that I wanted to replicate the points of the Atlantic triangular trade: Africa, the European colonies of the Caribbean and South America, and black America. The book accompanying Black in Latin America expands considerably on what I was able to include in that series. You might say that I have been fortunate enough to find myself over the past decade in a most enviable position: to be able to make films about subjects about which I am curious and about which I initially knew very little, with the generous assistance of many scholars in these fields and many more informants I interviewed in these countries.

The most important question that the PBS series and the book attempt to explore is this: What does it mean to be “black” in these countries? Who is considered “black,” and under what circumstances and by whom, in these societies? The answers to these questions vary widely across Latin America in ways that will surprise most people in the United States, just as they surprised me.

Henry Louis Gates Jr. is editor-in-chief of The Root and chairman of the W.E.B. Du Bois Institute at Harvard University. The Black in Latin America series airs over four weeks on PBS stations around the U.S. The accompanying book, from which this excerpt is drawn, will be published by NYU Press in March.

Women Empowerment to Get a Boost

Why Jackson’s water system is broken