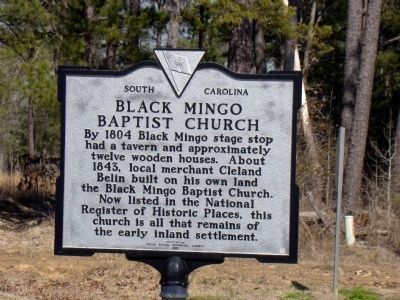 It can be argued that the black Baptist denomination arose out of a compelling need to address the inequities of racism experienced by blacks in the late eighteenth century. Concerned with their second-class status within white Baptist churches and armed with a newly-acquired and heightened racial consciousness, black Baptist pastors throughout the country, particularly in the South, began to form their own churches. These and later actions of black pastors reflected the commitment of black Baptist churches to extend their reach beyond the sanctity of their sanctuaries by working for and in African-American communities. What follows is a brief historical discussion of the origin of the Baptist denomination, in general, and in Georgia, in particular.

Unlike other black denominations founded primarily as spin-offs of Northern, largely white, Christian denominations, the black Baptist Church originated in the early 1700s when white missionaries migrated South in an effort to disseminate the Christian doctrine among slaves. Historically, white Baptists were the first denomination to reach out to and welcome fully enslaved blacks into their churches; however, their admission was contingent upon the enslaved members attending church services with their masters and understanding that baptism did not free them. Nevertheless, blacks joined Baptist churches in record numbers. It has been noted that the reason why most blacks joined the Baptist denomination—beyond the fact that they could be baptized—was because of similarities between West African practices and Baptist rituals. Moreover, the denomination also gave strong encouragement to black clergy. By the nineteenth century, primarily in the South, black Baptists outnumbered their white brethren three to one, resulting in constant tension between the two groups. To minimize these conflicts, blacks were seated in special “galleries,” in basements, outside the church doors, or allowed to hold their own church services in the evening under the watchful eye of an overseer. This trend became even more apparent after the insurrections of antislavery revolutionaries Denmark Vessey and Nat Turner. Segregation, and a desire by blacks to be free, motivated them to begin clandestine church meetings at various secret locations.

It is widely recognized that George Liele, who traveled and exported slaves along the Georgia-South Carolina boarder, was the first black preacher in the Baptist denomination. Essentially, Liele’s work was in response to many plantation owners who did not attend church regularly, but who believed that the use of the principles of Christian doctrine was a viable means to keep their slaves obedient. Nevertheless, in 1773, Liele organized the first black Baptist church, Silver Bluff Baptist Church, in the barn of his slave master, William Byrd. Byrd’s cooperation, no doubt, resulted from his convicitons that Christian principles kept slaves submissive. Though the church was successful in teaching the southern enslaved about the Bible and “clean living,” it ran into challenges that caused it to be disbanded just a few years after it was initially established.

“As more blacks in the South joined the Baptist denomination, concerns arose as to whether or not to affiliate with white churches and associations.”

Liele moved on, continuing his preaching and baptizing of slaves into the Baptist denomination. By 1777, he had organized yet another Baptist congregation—this time in Savannah, Georgia. In the mist of the Revolutionary War, a group of Silver Bluff church members moved to Savannah to assist Liele in his work with the slave population. After constant harassment by white property owners, Liele left Savannah to establish a church in the less hostile environment of Jamaica. Because of Liele’s work in Jamaica, the Baptist doctrine spread throughout the Caribbean. Nevertheless, one of the members from Silver Bluff, a baptized slave named Andrew Bryan, along with another member, Jesse Peters, organized the First African Church of Savannah in 1788. However, due to Bryan’s support of the British during the Revolutionary War, a group of white Georgians descended upon the church, thwarting efforts to expand the church, threatening many of its members, and imprisoning Bryan for inciting revolts among the enslaved. Because his owner supported his work among the enslaved, he purchased Bryan’s freedom, enabling him to continue to build upon his denominational efforts by founding Springfield Baptist Church of Augusta, Georgia. It was from the work of these two preachers that the number of black Baptists grew from a few dozen in the mid to late 1700s, to more than 25,000 by the turn of the century.

As more blacks in the South joined the Baptist denomination, concerns arose as to whether or not to affiliate with white churches and associations. It had not gone unoticed that it was primarily black pastors who had been active in evangelizing among the slave population, in establishing schools, and in “uplifting the race.”26 It was, therefore, agreed upon, that blacks would work in cooperation with whites in the America Baptist Union, via their African Baptist Missionary Society, yet remain independent from white Baptists.

Unlike the African Missionary Society, some black and white churches had a difficult time in cooperating with each other. Once again, these conflicts drove black pastors toward racially separated churches, creating unique opportunities for blacks, especially black pastors, to develop as indigenous community leaders. It was in these historically black churches that blacks, banned from participation in the politics and decision making affecting their communities, became educated not only in reading and writing, but also in community and civic affairs. Their collective engagement in political matters (i.e., slavery), albeit on the fringes, and their constant insurrections prompted the eradication of slavery as a legal practice.

Forty years of concentration on core issues centering on the education of former slaves and the black Baptist foreign mission led to the formation of the National Baptist Convention in 1895. The new freedoms bestowed upon blacks required a massive venture in education at all levels. Thus, new schools, particularly institutions of higher learning, called “normal and industrial schools,” were created across the South to assist in the integration of newly freed blacks into American culture and society.28 Interestingly, Meir and Rudwick write that “[i]n the South, during the three quarters of a century following Reconstruction, most of the leading professional men and many prominent businessmen were products of the church-related colleges. . . .”

The large number of blacks who joined the Baptist Church during this period, though somewhat related to the Church’s historical ties to the South, was a testament to the levels of activism and enthusiasm black preachers demonstrated by educating and assisting the newly freed slaves. It was the pastor’s job to teach lawfulness, habits of chaste living, manners, and other social skills. Albert Raboteau wrote of the successful efforts of one pastor during this era:

[They]‘have less superstition, less reliance on dreams and vision, they talk less of the palpable guiding of the Spirit as independent of or opposed to the word of God.’ They were also learning to ‘avoid habits of whining, snuffling, grunting, drawling, repeating, hic[c]oughing, and other vulgarities in prayer. . . .

As America evolved, so did the role of black churches. The passive gospel that was common in the early Black Church was now being replaced by a more community-responsive gospel. These southern blacks understood that if they were going to survive, they would have to develop programs that met their every need. Out of this conviction arose mutual aid/benevolent societies and private enterprises. For example, black churches in Richmond, Virginia, during the 1850s assisted needy blacks, both slaves and free persons in distress, with the creation of a “Poor Saints” fund, to which both black and white churches contributed each month.31 Thus, it can be concluded that the ability of black Baptist churches to advocate for the needs of blacks contributed greatly to the overall success of the Church as a formultable institution. It was during this period the denomination grew in stature to become one of the most important and influential institutions in the black community.

During Reconstruction, with the deployment of federal troops into southern states, many black churches became involved in politics, resulting in a significant change in their role—from one of intercessor to one of policy initiator. Most early black elected officials were products of leadership roles in black churches—pastors, elders, and deacons—such as Reverend Richard Cain who was elected to the United States House of Representatives in 1873 from Charleston, South Carolina.

Although black churches played an important role in advocating for the needs of blacks in the early-to-mid-nineteenth century, their false sense of security, resulting from blacks being elected to public office in record numbers, fostered a level of complacency by the late nineteenth century with regard to community advocacy. Not only had southern black churches assumed a diminished role as protectors and providers for the black community, their focus began to markedly shift to the spiritual “after-life.” As such, most of the gains of the Reconstruction period that blacks had acquired, from political to economic, were lost during the nearly seventy-year reign of legal segregation—historically referred to as the Jim Crow Era.

The challenges of the twentieth century, however, ushered in a return of the socially active black church. southern blacks Baptist churches, once again, organized advocacy groups to respond to the mass lynchings and civil and voting rights violations that plagued black communities. These activist Baptist churches, along with black churches representing other Christian denominations, provided the foundational support for the formation of secular associations like the Southern Christian Leadership Conference and Student Nonviolent Coordinating Committee.

Consequently, with the passage of the Voting Rights Act of 1964, the Civil Rights Act of 1965, and the election of southern blacks to federal, state, and local offices, the black community, once again, began to look less to the Church and more to black elected representatives to meet their needs. Black churches, by virtue of political circumstances, again shifted the focus of their ministries. Spiritual needs began to emerge as the primary focus, as opposed to the more practical, secular needs of blacks.

David Hurst, author of The Shepherding of Black Christians, writes of this period:

the contemporary Black Church had no outside contact with the general needs of the community. In essence, the churches became private social clubs. Black preachers primarily benefited from this arrangement, whose pastoral energies were largely centered in the Sunday morning worship impact. The members reinforced this arrangement. The Black Church was mainly self-serving and irrelevant to the real needs of its members and the wider Black community.