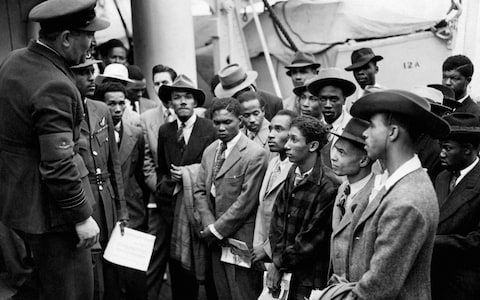 This would mark the beginning of the mass immigration movement in the UK, resulting in an estimated 172,000 West Indian born people living in the UK by 1961. To many, they are known as the Windrush Generation.

For the passengers of the Empire Windrush in 1948, and the thousands who followed after, the British Nationality Act 1948 was their saving grace. The act allowed them, and others living in Commonwealth countries, British Citizenship and full rights of entry and settlement.

Jamaica was still reeling from the 1944 Atlantic hurricane season when they were invited to Britain in order to fill gaps in the labour market caused by the devastation of World War Two. Many had seen advertisements in newspapers in Jamaica, heralding Britain as the ‘Mother Country’, promising jobs and a better standard of living.

Like many of the passengers aboard Windrush, Sam King served in the Royal Air Force during WW2, but was told he couldn’t stay in England after the war ended in 1945.

He initially signed up after urging from his mother: “She said, ‘my son, the Mother Country is at war. Go and help. If you live it will be a good thing. Go and serve in the Royal Air Force.’ Because – at that time – most West Indians thought it was a good thing. The Mother Country was at war, and she could not beat Nazi Germany on her own.”

Despite his contribution to the country, after the culmination of the war he was told that, unless he was married to an English girl or had been accepted into the home of a “coloner”, he would have to return back home to Jamaica.

King describes his return to Jamaica as “disappointing”. He wanted to finish his studies and get a good education: “In Jamaica, unless you had money, you weren’t going to private school. I had no intention of being a farmer in Jamaica.”

His time in England had shown him the differences in education between the two countries and, although he didn’t have a girlfriend at the time, he says he knew he wanted a better education for his future children.

After seeing an advertisement in The Daily Gleaner offering passage to Britain in order to work for £28.10, King, and 491 fellow Caribbeans, decided to make their way to the ‘Mother Country’.

Though the atmosphere on the ship was mostly positive, they soon heard word that parliament wasn’t happy with their imminent arrival.

“We heard people on the radio saying, ‘why are they coming’?” King remembers, though he was determined to keep morale high among his fellow passengers. “After hearing that, I went and told everyone, ‘Even if a man steps on your foot, you don’t hit back. It’s all about peace and love’.”

When they arrived, the immigrants were met by the press, and a plane was sent by The Evening Standard to greet them as they sailed up the channel. The paper’s headline that day read: “Welcome Home! Evening Standard plane greets the 400 sons of Empire”.

Despite the relatively warm welcome from the press, racial tension amongst fellow citizens was rife. Unofficial ‘colour bars‘ were introduced, and workplace discrimination was commonplace.

Jack Howard Drake worked for the Home Office between 1965 and 1972 and admitted that although they did employ black people, they had certain standards that had to be met: “We were quite happy to employ coloured people, providing they weren’t visible.

“In other words, if they worked in the kitchens that was alright, but employers felt that shoppers wouldn’t like to see coloured hands handling food. They thought that ladies wouldn’t be happy to buy their underwear from coloured girls.”

In ‘Colour Bar: The Triumph of Seretse Khama and His Nation’ Susan Williams details the experience of William Naltey, who had served in the RAF: “I suppose you can say racism crept up on me, although some other people may have seen it straight away. But it is something that crept up on me very slowly.

“Just after the war was over, I was on a bus and there were two service people in front of me, one a woman. And she was saying, “Isn’t it about time they went back to their homes?”, and it was the first time that it hit me that, you know, that people were putting up with us, that they didn’t really want us, but we were a necessary evil.”

King echoes this sentiment: “Some were welcoming,” he says, “but others weren’t, they had an imperialist attitude. They thought people from the colonies should be planting bananas and chocolate.

“People were more aggressive, they were trying to say that you shouldn’t be here. Others, I would say, it didn’t really matter for them. And the rest? They were just nice, ordinary people.”

Ignoring racial tension, King says finding a job wasn’t too difficult because of the need for a new workforce after the war. He rejoined the RAF and later worked as a manager for the Royal Mail and also became the first black mayor of the London Borough of Southwark.

Many others joined the British Rail, the newly formed NHS and public transport companies, as they had begun to recruit almost exclusively from the Caribbean migrants. Because of this, there is a growing movement to have the Windrush Generation officially celebrated due to their contribution to British society.

Patrick Vernon, founder of Every Generation, has lobbied to get the impact of the Windrush Generation recognised nationally.

“As a country, we don’t recognise their contribution, or when we do it is distorted,” Vernon said, “they were invited by the government as guests, and their arts, politics and religion especially had a major impact on the community.”

“I would like it to be recognised every year instead, like D-Day. These people came and survived incredible hardship and paved the way for the thousands of next generation British Caribbeans. We should be celebrating them and recognising the migrant contribution.”

How Beyonce's Album – Lemonade – made £3 million a day.

Is "Investment" in Africa akin to Extortion?