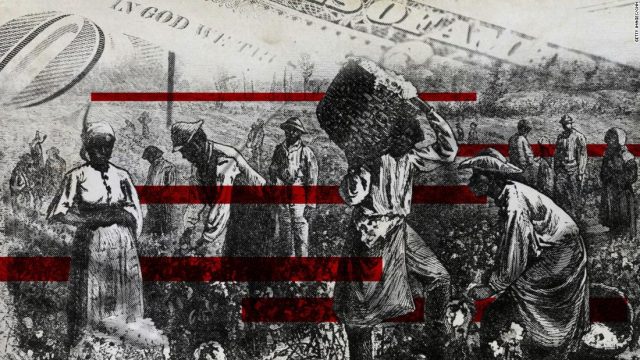 How do you put a cash value on hundreds of years of forced servitude?

This may be the most contested part. Academics, lawyers and activists have given it a shot, though, and their results vary.
Most formulations have produced numbers from as low as $17 billion to as high as almost $5 trillion.
The most often-quoted figure, though, is truly staggering, as anthropologist and author Jason Hickel notes in his 2018 book, “The Divide: Global Inequality from Conquest to Free Markets”:
“It is estimated that the United States alone benefited from a total of 222,505,049 hours of forced labor between 1619 and the abolition of slavery in 1865. Valued at the US minimum wage, with a modest rate of interest, that is worth $97 trillion today.”
Keep in mind, the total US federal budget for fiscal year 2018 was $4.1 trillion.
Other formulations are more modest, like a 2015 report by University of Connecticut assistant professor Thomas Craemer. He estimated that the labor of slaves was worth at least $5.9 trillion and perhaps as much as $14.2 trillion (in 2009 dollars). Craemer came up with that figure by estimating the monetary value of slaves over time, the total number of hours they worked and the wages at which that work should have been compensated.
Craemer’s number is also lower because he only deals with the slavery that happened from the time of the country’s founding until the end of the Civil War, so it ignores slavery during the colonial period and the discrimination that blacks endured during the Jim Crow era.

Where would the money come from?

Generally, advocates for reparations say that three different groups should pay for them: governments, private companies and rich families that owe a good portion of their wealth to slavery.
It makes sense that federal and state governments (which enshrined, supported and protected the institution of slavery) and private businesses(which financially benefited from it), would be tempting targets from which reparations could be extracted. But wealthy families?
“There are huge, wealthy families in the South today that once owned a lot of slaves. You can trace all their wealth to the free labor of black folks. So when you identify the defendants, there are a vast number of individuals,” attorney Willie E. Gary told Harper’s magazine in November 2000, during the height of the last, big time of reparations talk. Gray was talking about how these families could be sued for reparations since they benefited directly from slavery.
As you might imagine, suing large groups of people to pay for reparations wouldn’t go over well. Others have suggested lawmakers could pass legislation to force families to pay up. But that might not be constitutionally sound.
“I don’t think you can legislate and have those families pay,” Malik Edwards, a law professor at North Carolina Central University, told CNN. “If you’re going to go after individuals you’d have to come up with a theory to do it through litigation. At least on the federal level Congress doesn’t have the power to go after these folks. It just doesn’t fall within its Commerce Clause powers.”
The Commerce Clause refers to the section of the US Constitution which gives Congress the power to regulate commerce among the states.

But reparations mean more than a cash payout, right?

It could. Reparations could come in the form of special social programs. It could mean giving away land.
That’s why people need to check the fine print on the support all of those Democratic presidential candidates have given to reparations. None of them have articulated a concrete proposal that would specifically give a cash benefit to black Americans.
They’ve talked about developing tax credits that would go to all low-income people, not just blacks, and creating so-called “baby bonds” that would help all of America’s children pay for college, not just African-American children.
None of the major Democratic candidates so far have proposed making direct cash payments to African Americans as a way for the country to atone for its “original sin,” except for Marianne Williamson, who announced her candidacy in January.
Williamson, a best-selling author and spiritual counselor to Oprah Winfrey, has advocated for reparations for years and proposes giving $100 billion in reparations for slavery, with $10 billion a year to be distributed over 10 years.
Others have suggested a mix of cash and programs targeted to help African Americans.
“Direct benefits could include cash payments and subsidized home mortgages similar to those that built substantial white middle-class wealth after World War II, but targeted to those excluded or preyed upon by predatory lending,” Chuck Collins, an author and a program director at the Institute for Policy Studies, told CNN. “It could include free tuition and financial support at universities and colleges for first generation college students.”
Reparation funds could also be used to provide one-time endowments to start museums and historical exhibits on slavery, Collins said.

What are the arguments against reparations?

There are many. Opponents of reparations argue that all the slaves are dead, no white person living today owned slaves or that all the immigrants that have come to America since the Civil War don’t have anything to do with slavery. Also, not all black people living in America today are descendants of slaves (like former President Barack Obama).
Reparation funds could also be used to provide one-time endowments to start museums and historical exhibits on slavery, Collins said.

What are the arguments against reparations?

There are many. Opponents of reparations argue that all the slaves are dead, no white person living today owned slaves or that all the immigrants that have come to America since the Civil War don’t have anything to do with slavery. Also, not all black people living in America today are descendants of slaves (like former President Barack Obama).
“Within the target population, will all receive the same? Same per person, or same per family? Or will there be adjustment for need? How will need be measured?” asks Frum, a former speechwriter for President George W. Bush. “And if reparations were somehow delivered communally and collectively, disparities of wealth and power and political influence within black America will become even more urgent. Simply put, when government spends money on complex programs, the people who provide the service usually end up with much more sway over the spending than the spending’s intended beneficiaries.”
In a recent column for The Hill, conservative activist Bob Woodson decried the idea of reparations as “yet another insult to black America that is clothed in the trappings of social justice.” He also told CNN he feels America made up for slavery long ago, so reparations aren’t needed.
“I wish they could understand the futility of wasting time engaging in such a discussion when there are larger, more important challenges facing many in the black community,” Woodson, the founder and president of the Woodson Center, told CNN. “America atoned for the sin of slavery when they engaged in a civil war that claimed hundreds of thousands of lives. Let’s for the sake of argument say every black person received $20,000. What would that accomplish?”

This isn’t the first time reparations have come up, is it?

After decades of languishing as something of a fringe idea, the call for reparations really caught steam in the late 1980s through the ’90s.
Former Democratic Rep. John Conyers first introduced a bill in 1989 to create a commission to study reparations. Known as HR 40, Conyers repeatedly re-introduced the bill, which has never been passed, until he left office in 2017. Texas Democratic Rep. Sheila Jackson Lee has taken up the baton, sponsoring HR 40 in this year’s Congress.
Activist groups, like the National Coalition of Blacks for Reparations in Americaand the Restitution Study Group, sprang up during this period. Books, like Randall Robinson’s “The Debt: What America Owes to Blacks,” gained huge buzz.
Then came the lawsuit. In 2002 Deadria Farmer-Paellmann became the lead plaintiff in a federal class-action suit against a number of companies — including banks, insurance company Aetna and railroad firm CSX — seeking billions for reparations after Farmer-Paellmann linked the businesses to the slave trade.
She got the idea for the lawsuit as she examined old Aetna insurance policies and documented the insurer’s role in the 19th century in insuring slaves. The suit sought financial payments for the value of “stolen” labor and unjust enrichment and called for the companies to give up “illicit profits.”
“These are corporations that benefited from stealing people, from stealing labor, from forced breeding, from torture, from committing numerous horrendous acts, and there’s no reason why they should be able to hold onto assets they acquired through such horrendous acts,” Farmer-Paellmann said at the time.
The case was tossed out by a federal judge in 2005 because it was deemed that Farmer-Paellmann and the other plaintiffs didn’t have legal standing in the case, meaning they couldn’t prove a sufficient link to the corporations or prove how they were harmed. The judge also said the statute of limitations had long since passed. Appeals to the US 7th Circuit Court of Appeals and the US Supreme Court proved unsuccessful, and the push for reparations kind of petered out.
But Coates’ 2014 article in The Atlantic reignited interest in the issue. New reparations advocacy groups, like the United States Citizens Recovery Initiative Alliance Inc., took up the fight. Black Lives Matter includes slavery reparations in its list of proposals to improve the economic lives of black Americans. Even a UN panel said the US should pay reparations.
And now major candidates for president are endorsing the idea.

So, what are the prospects of reparations moving forward?

Despite the words of support from these Democratic presidential candidates, slavery reparations still face an uphill battle.
The idea isn’t popular with the American public. A 2016 Marist poll found that 68% of Americans don’t think the US should pay reparations to the descendants of slaves. Unsurprisingly there’s a racial divide to this. Some 81% of white Americans are against reparations, while 58% of African Americans support them. What is surprising is the generational divide the poll revealed. Millennials surveyed were much more likely than Baby Boomers or Gen-Xers to support reparations. Even still, a total of 49% of millennials opposed them.
Those numbers make it difficult for any candidate to try to sell a skeptical American public on the idea and to get lawmakers to pass legislation. And after the failure in the courts of Farmer-Paellmann’s lawsuit more than a decade ago, taking legal action to secure reparations doesn’t seem like the most promising route either.
Whatever happens, almost everyone agrees that something needs to be done to cut down the huge wealth gap between white and blacks that slavery helped created. Collins, the author and scholar, said his own research showed that the median wealth of a white household is $147,000, which is about 41 times greater than the median wealth of a black family, which is $3,600.
“This can only be explained through an understanding of the multigenerational legacy of white supremacy in asset building,” he told CNN.
“People say, ‘slavery was so long ago’ or ‘my family didn’t own slaves.’ But the key thing to understand is that the unpaid labor of millions — and the legacy of slavery, Jim Crow laws, discrimination in mortgage lending and a race-based system of mass incarceration — created uncompensated wealth for individuals and white society as a whole. Immigrants with European heritage directly and indirectly benefited from this system of white supremacy. The past is very much in the present.”