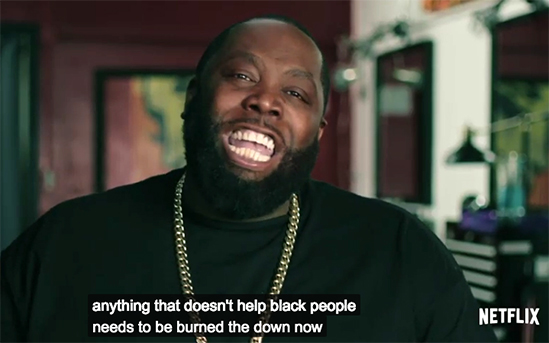 The writer: sandrarose.com
Date first published: 9 January 2019
Rapper Killer Mike stars in a new six-episode Netflix original series titled Trigger Warning, that takes on social issues and promotes the growth of Black-owned businesses in Atlanta. In the series, Mike tests the power of the Black dollar by only spending money in the Black community for three days.
Trigger Warning, which premieres on January 18 on Netflix, features Killer Mike’s controversial views on race relations, the economy, Black businesses, the gang culture, education, and more.
“Anything that doesn’t help Black people needs to be burned the f-ck down now!” he says.
The series’ title refers to emotional triggers (usually on social media) that sets off strong reactions in people such as anger, sadness and anxiety.
The outspoken Grammy Award-winning rapper and activist conducts social experiments that take him into neighborhoods, strip clubs, schools and a corporate conference room, where he assists notorious street gang the Crips to promote their own line of soda.
The 43-year-old Atlanta native also put his money where his mouth is by spending cash in Black-owned businesses for three days.
In one scene in a strip club, Mike tells an Asian stripper she has to go because she’s not Black.
During a visit to an elementary school classroom, Mike chastises a Caucasian boy for speaking out of turn while a Black boy was talking.
Wherever you stand politically, Trigger Warning will reshape the way you think about social issues and the Black experience in the South.
source: sandrarose.com