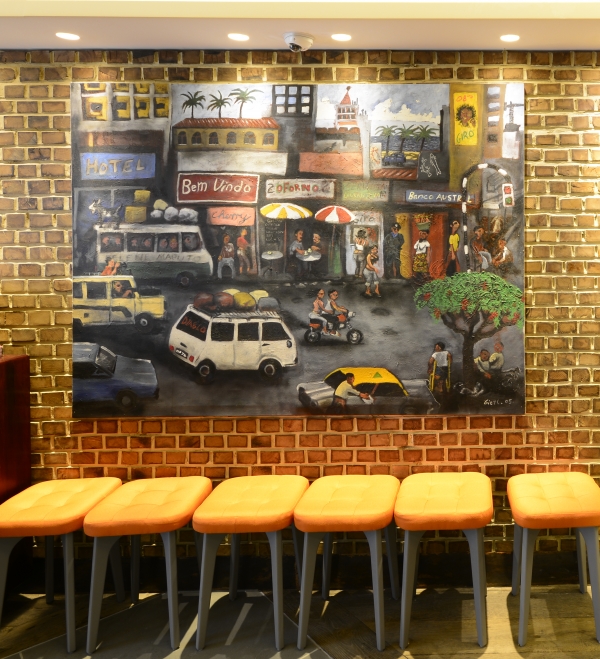 Nando’s was founded in 1987 in Johannesburg, South Africa, which remains the cultural heartbeat of the brand.  The restaurant was founded in 1987 in the Johannesburg  suburb Roettenville when Portuguese-born audio engineer Fernando Duarte took his entrepreneur friend Robert Brozin to a Portuguese takeaway called Chickenland for a meal. After trying the chicken with piri piri, they bought the restaurant for about 80,000 rand (equivalent of about £25,000 at the time).
They renamed the restaurant Nando’s after Fernando’s first born son. After two years the restaurant had four outlets, three in Johannesburg and one in Portugal. By 1997, there were 105 Nando’s restaurants in the country.  As of 2017 there were over 1,000 Nando’s branches in 35 countries.
Next time you go to Nandos, you need to notice the art on its walls. It all comes from Southern African Artists.  The Art in the restaurants is an expression of South African  culture. By exhibiting original art from their cultural heartbeat in restaurants, they believe that they are democratizing art by making it accessible to anyone visiting their restaurants, while telling the story of their beginnings. Nando’s ambition in art is to change lives and make a real difference to Southern African artists and their families by providing career development opportunities and exposure.
Since 2002, in a close shared value partnership with Spier Arts Trust, Nando’s has been enabling career development opportunities for artists. By allowing artists to focus full-time on their artistic careers with the potential to earn a regular income, Nando’s is making a difference in people’s lives while at the same time growing their body of high quality Southern African contemporary art. Nando’s houses one of the largest contemporary Southern African bodies of art publicly exhibited in the world, each piece an original work. By sharing the artists’ stories, they are sharing their own story. By showcasing the artists’ work globally in their restaurants, they are sharing a significant period in Southern Africa’s history with the rest of the world.
Nandos now owns over 20,000 pieces of Southern African Art.  More than any other entity worldwide.  It is a huge investment, which supports Artists, but also serves as an investment for the company which will no doubt be worth many millions.

Misinterpretion of African-American dialects in court