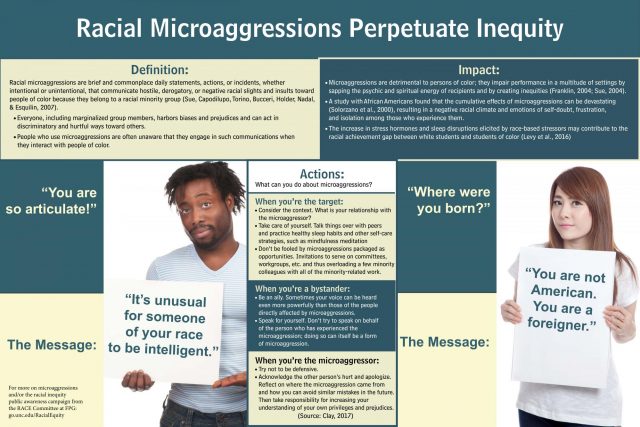 A microaggression is a subtle, often unintentional, form of prejudice. Rather than an overt declaration of racism or sexism, a microaggression often takes the shape of an offhanded comment, an inadvertently painful joke, or a pointed insult.

For example, a white manager might comment that an Asian American employee speaks English well. A white student might ask where an Indian American student is from. A white woman may cross the street when she sees an African American man walking toward her at night. The white individual may not have intended to offend the person of color, but the comment still reminds the person of color that they are not fully accepted or trusted in their community.

Experiencing microaggressions on a daily basis can be deeply stressful. The experience can also be unsettling, because the marginalized person may struggle to understand if the comment was intentional and how to respond.

The term was coined by Harvard Medical School psychiatrist Chester Pierce in the 1970s to describe the subtle insults he witnessed between white students and African American students. The term had a resurgence in 2007 when Teachers College Columbia University psychologist Derald Sue began to popularize the idea through his writing. Since then, the construct has spurred tremendous conversation, research, and debate.

The Critique of Microaggressions

Further, the assumption of ill will could prevent the free flow of dialogue in settings from academia to psychotherapy. There may be merit to these claims. However, those arguments cannot erase the emergence and popularization of the concept, which underscores the importance of recognizing, defining, and studying the impact of subtle racism on those in marginalized communities.

To be more conscious of microaggressions and avoid having them, one can explore their biases, reflect on the connotations a remark might have, review common examples, and interact with people from different communities.

The Common Experience of Racial Microaggressions

Such incidents have become a commonplace experience for many people of color because they seem to occur constantly in our daily lives.

When a white couple (man and woman) passes a black man on the sidewalk, the woman automatically clutches her purse more tightly, while the white man checks for his wallet in the back pocket. (Hidden message: Blacks are prone to crime and up to no good.)

A third-generation Asian American is complimented by a taxi cab driver for speaking such good English. (Hidden message: Asian Americans are perceived as perpetual aliens in their own country and not “real Americans.”)

American Indian students at the University of Illinois see Native American symbols and mascots, exemplified by Chief Illiniwek dancing and whooping fiercely during football games. (Hidden message: American Indians are savages, blood-thirsty, and their culture and traditions are demeaned.)

In our eight-year research at Teachers College, Columbia University, we have found that these racial microaggressions may, on the surface, appear like a compliment or seem quite innocent and harmless, but nevertheless, they contain what we call demeaning meta-communications or hidden messages.

Hip Hop is here to stay, despite Gene Simmons

Re-imagined – a black version of a Michelangelo Sistene Chapel Painting