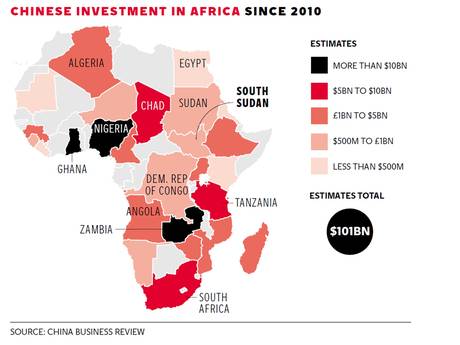 Why China invests in Africa?
by J B Maverick, first published August 13, 2015 on Investopedia
The level of China’s investment in the continent of Africa is increasing at a rate fast enough to raise concerned eyebrows in the west. Primary motivations that lie behind China’s push toward increased investments in African nations include the desire to secure a solid base of raw materials to fuel China’s own rapidly growing economy, the desire to increase China’s global political influence and the major growth opportunity presented by emerging market economies in Africa.
China’s total investment in African nations is still at a lower overall level than that of some western, developed countries, but the pace at which China’s African investment is growing completely dwarfs that of any other country. Mining and oil remain a primary focus of China’s investments; however, the country’s investments extend throughout virtually every market sector, including everything from infrastructure to food processing. China’s investments in the largely undeveloped infrastructure of African nations are particularly strong, encompassing key areas such as utilities, telecommunications, port construction and transportation.
China’s investments have the country well-positioned to profit from continuing economic development in Africa. Many Chinese firms investing in Africa are state-owned. This gives them a notable competitive edge when, for example, bidding procurement contracts in African countries, since the companies can obtain substantial subsidies from the Chinese government.
China’s push into African economies puts it in direct competition for influence with the United States, and as of 2015, China has the upper hand. Chinese-African trade, projected to double by 2020, already totals over $200 billion, more than twice the level of U.S.-African trade. In 2014, the U.S. committed to investing $14 billion in African aid over the next decade, but that is only a fraction of China’s commitment to invest an additional $175 billion over the same time period. Nearly half of China’s total foreign aid goes to African nations.
The stakes in Africa are high due to the continent’s rich abundance in raw materials. Africa is estimated to contain 90% of the entire world supply of platinum and cobalt, half of the world’s gold supply, two-thirds of world manganese and 35% of the world’s uranium. It also accounts for nearly 75% of the world’s coltan, an important mineral used in electronic devices, including cellphones.
China’s relationship with Africa has been gaining momentum, and according to recent data from Pew Research, African people are seeing the benefits. Of the nations surveyed, only Uganda does not see China as the world’s leading economic power, ahead of the United States. All African nations had a “favourable view” of China, a finding that echoes a poll carried out in 2014 by the BBC, which found Africans to hold a positive opinion of China
The top areas of Chinese investment in Africa, by frequency, are:

The following chart, meanwhile, shows the African countries which have received the most Chinese investment up to 2014

The Black Church In Britian