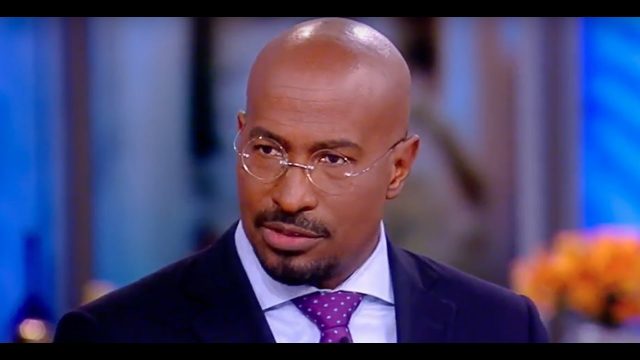 Van Jones is one of those individuals that we are supremely proud of. A highly educated, intelligent and courageous man, he goes after what is right without fear of failing. He is making a difference with his various platforms, and he keeps it real. As an activist he is powerful – and an example of a SuperMan. We need more like him in the Black Community. Below we describe his activities and share an interview he recently did about his love of Hip Hop.

Anthony Kapel “Van” Jones (born September 20, 1968) is an American news commentator, author, and non-practicing attorney. He is a co-founder of several nonprofit organizations, including the Dream Corps, a “social justice accelerator” that operates three advocacy initiatives: #cut50, #Yeswecode and Green for All.

He is the author of The Green Collar Economy and Rebuild the Dream, both ranking as New York Times bestselling books. He is a regular CNN contributor and host of The Van Jones Show.

He served as President Barack Obama’s Special Advisor for Green Jobs, as a distinguished visiting fellow at Princeton University, and as a co-host of CNN’s political debate show Crossfire. He is president of the Dream Corps and is among activists featured in 13th, a 2016 documentary directed by Ava DuVernay about the U.S. justice system and factors that have resulted in the over-incarceration of minorities and the highest incarceration rate in the world.

He continues to link with key people to get real changes made in his human rights agenda. These have included Newt Gingrich, Alecia Keys, Kim Kardashian, Jared Kushner and Donald J Trump.

Editor’s Note: This story originally appeared in the Spring 2020 issue of XXL Magazine, on stands now.

Van Jones has fought injustices for over 20 years, and has been a hip-hop fan for even longer. The news commentator, best-selling author and non-practicing attorney started his mission in prison reform in an era where rappers were spitting about police brutality and socio-economic hardships, a reality that is still all too real in today’s society. When he wasn’t suing police departments or protesting, Jones was listening to N.W.A and Public Enemy.

The worlds of hip-hop and prison reform would eventually collide, thanks in part to Jay-Z’s Reform Alliance, which Jones is the CEO of. He’s joined forces with Hov and Meek Mill to aid the rappers’ attempt to change prison laws in 2019 while working to get awareness in the hip-hop community and beyond. Jones, 51, who’s currently managed by Roc Nation, spoke to XXL about his hip-hop playlist, his relationship with Jay-Z, helping Meek get out of prison and more.

XXL: Rappers seem to gravitate towards you as someone who uses their platform against injustices. How does that feel?

Van Jones: It’s a good feeling. It’s so good that hip-hop has gotten to the place where it’s a global superpower. We’re able to use the power of hip-hop to change laws [and] change the conversation.

You recently moderated a panel for the premiere of 50 Cent’s new show For Life. Do you speak to 50 Cent often?

I wish I could say that I speak to him very often, I don’t. I can see why he’s been able to get to where he’s going. I can deal with celebrities. I can deal with athletes. I can deal with Donald Trump face to face. When you’re talking to 50 Cent, you’re not going to win that interaction. He’s going to say something to get you stumbling. He’s a force of nature.

You’re CEO of Jay-Z’s Reform Alliance. How did your partnership with Jay come about?

I did a lot of the philanthropic and charitable work for Prince. Prince and Jay-Z were huge fans of each other. After Prince died, Roc Nation reached out and said, “Don’t worry, we got you.” And that’s how I became a part of Roc Nation.

Why do you think rappers aren’t as political as they used to be?

I don’t know why some of the younger rappers aren’t there yet, but give folks time. The times are calling and are demanding stuff that you’re hearing from a J. Cole than maybe from the fluffier stuff.

How did you get involved in Meek Mill’s situation?

I was doing a speaking tour and I went to Philly with Roc Nation. I got a chance to interview [Meek] on stage. He spoke from his heart about what he was going through, still being on probation. Within weeks, they put him in prison for popping a wheelie. Roc Nation texted me from the courtroom and said, “This is what happened…” My first text back was, “They done messed with the wrong folks.” The next time I saw him, we had won the battle.

Who did you listen to growing up?

Run-DMC. [I’m a] huge, huge Tupac fan. I cried like a baby. I was standing in my office when it came on the radio that he had died.

So, you’ve been a hip-hop fan since the beginning?

Yeah, it’s crazy. My sons, they don’t understand how much of a global achievement it is for our community to have turned hip-hop into the biggest cultural phenomenon in the world. If you don’t think young people and youth culture can change the entire world, I can tell you in my life I’ve seen it happen.

Is there a rapper that you haven’t met yet that you’d like to meet?

I’ve never met LL [Cool J]. I’ve been in the same room with him, [but] I’ve never been able to get to the side of the room where he’s at to shake his hand.