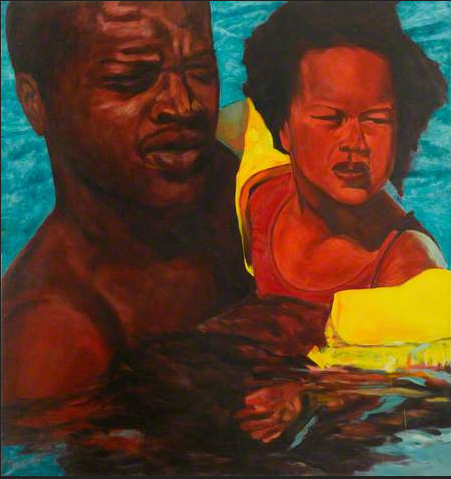 by Molly Tresadern, Artuk.org
(first published 2nd October 2017)
In November 2016, the BBC ran a month-long ‘Black and British’ season. We highlighted ten black British artists with works in public collections, celebrating the grand canvases of Frank Bowling, the controversial portraits of Chris Ofili, the questions about identity and colonialism posed by Sonia Boyce, Lubaina Himid and Tam Joseph, and the quiet, powerful portraits of Lynette Yiadom-Boakye.
Every October is globally recognised as Black History Month, and this year marks 30 years of the celebration in the UK – and 90 in the USA. 2017 has also seen a number of high-profile exhibitions dedicated to the work of black artists, including Tate Modern’s exploration of civil rights-era art ‘Soul of a Nation’ and Nottingham Contemporary’s ‘The Place is Here’. So the time seems apt for the much-needed follow up to our piece last year, celebrating more black artists who have their work represented in public art collections in the UK.
Hurvin Anderson
Where better to start than with one of the 2017 Turner Prize nominees? A recent change in the prize rules has made artists of all ages eligible, so Anderson has – along with Lubaina Himid – become the first nominee over the age of 50 since 1991.

Jersey depicts the interior of a barbershop in Jamaica, a theme that Anderson has returned to numerous times, using similar (or the same) compositions. This painting looks almost abstract until you take a second, closer look: you realise that the seats are unique to one setting, that the tiny points of colour are jumbled lines of hair product, that the larger squares of colour on the wall are posters and pictures. Anderson works from photographs he takes of real-life settings, which is perhaps how this painting achieves elements both of being abstract and photo-realistic.
One of Anderson’s works on display at the Ferens Gallery for the Turner exhibition continues the barbershop theme, though the coloured squares are replaced by posters, including of Malcolm X and Martin Luther King: the piece is titled Is it OK to be Black?
These paintings speak to Anderson’s Jamaican heritage. He grew up in Birmingham and it’s interesting to think of the juxtapositions he has created: the warmly-coloured interiors of these barbershops instead of the grey of a UK city (though perhaps this is being a little unfair to Birmingham).
Veronica Ryan
Veronica Ryan works primarily in sculpture (some of which you can see on Tate’s website) so we only have one of her works on Art UK: Territories. It doesn’t immediately seem to bear any relation to her similarly-titled work Territorial – a plant-like sculpture, a ‘softly organic form’ made of plaster and bronze – and information on the painting is quite hard to come by.

Veronice Ryan was part of a real ‘moment’ for black women’s art. In 1983, Ryan was represented in Lubaina Himid’s first curated exhibition, ‘5 Black Women: Exhibition of drawings, paintings and sculpture’, alongside Sonia Boyce, Houria Niati, Claudette Johnson and Himid herself. This marked the start of Himid’s work to bring black women artists into the spotlight, and marked out black women’s art as having a voice all of its own. Himid would go on to curate numerous exhibitions focussing on the work of black artists. 2017’s ‘The Place is Here’ exhibition
Yinka Shonibare

Line Painting is currently the only work by Shonibare we have on Art UK. The Arts Council Collection describe its meaning:
‘This work is unabashedly decorative but there is more to it than mere decor. Like many other painting installations by Yinka Shonibare, it is made up of an array of small canvases, which have Dutch wax fabric prints as their support. Popular in West Africa since the 1960s when their jazzy colours captured post-independence verve, the Dutch wax prints actually originated in Indonesia. The batik techniques were later industrialised by Dutch colonisers and manufactured in Holland. The British soon copied, then monopolised the process with factories in Manchester employing Asian workers and English designers to produce goods for export to West African markets. The uses of Dutch wax prints therefore invests Shonibare’s paintings with historical, cultural and commercial information in addition to their surprising visual qualities.’

We have an article coming out this month that will detail more about Shonibare’s life and work: watch this space.
Eugene Palmer
Palmer was one of the artists featured in the Hayward Gallery’s 1989 ‘The Other Story’ exhibition, the first ever retrospective of British African, Caribbean and Asian Modernism. The exhibition was curated by Rasheed Araeen and attracted both acclaim and derision.

Duppy Shadow is a fascinating painting. ‘Duppy’ is a Jamaican term for a ghost or a spirit. Is the girl depicted meant to represent some sort of ghost? She stands at odds with the landscape she is in, looking awkward against the backdrop, almost combative. She’s in the British countryside as rendered by Gainsborough or Constable and finds herself at odds with it. Is the ‘Duppy’ the spirit of the girl’s Jamaican roots?
Barbara Walker

Walker is one of a number of influential artists from Birmingham with African-Caribbean heritage: her contemporaries include Vanley Burke, Hurvin Anderson, Keith Piper and Donald Rodney (the latter two featuring in our previous piece).
Early in her career, Walker was keen to depict and represent the identity of Birmingham she could see all around her, capturing the faces she saw on the streets in a series named Private Face. More recently, Walker highlighted the contribution of black servicemen and women in a series of large pencil drawings, exhibited in Birmingham and titled ‘Shock and Awe’.
Sometimes painting in oils, sometimes directly onto vast walls, Walker has continued her output to this day: this year, she exhibited in the first-ever ‘Diaspora Pavilion’ at the Venice Biennale. Its addition means that, among all of the pavilions representing work from their respective countries, there is a coming-together of artists from different backgrounds. It is described by the Contemporary Art Society as bringing together ‘a group of 19 British-based, ethnically diverse artists who, through the many narratives underpinning their work, speak eloquently of the infinite complexities of the very idea of nationality.’
Molly Tresadern, Art UK Content Creator and Marketer