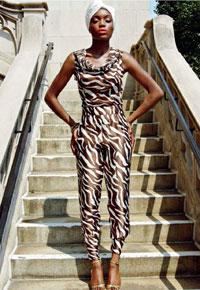 It may seem hard to break into the apparel business in one of the world’s fashion capitals if you happen to be Black and female, but there is hope! A new crop of black women have hit the fashion scene, attracting attention with distinct design points of view and are poised to rival many of the American fashion houses that have reigned over high-end fashion for decades.

One designer, who may be well on her way to eventually reap the same amount of multimillions in revenue as her mainstream counterparts, is Anitra Michelle, a New York-based designer and creator of fashion clothing collection Plutocracy. Launched in May of 2009, Plutocracy is a stylish, mid-priced collection of women’s wear designed for what Michelle refers to as “the multifaceted professional woman with a desire to express her individuality while showcasing a style that is creatively polished.”
Unlike many of the faces behind today’s onslaught of celebrity-laced brands, Michelle is a technically trained designer who started out by watching and learning. After studying at the Fashion Institute of Technology (FIT), she immersed herself in the world of design by working as an assistant stylist and pattern maker’s apprentice for such brands as Vera Wang, Karl Largefield and Lanvin.
But to create excitement about her own label, Michelle decided on debuting her first collection Classic Funk and spring 2011 collection Mythical Mayhem, during New York Fashion Week to position herself as a notable fresh presence on the fashion scene. “I think my goal for the spring 2011 line was to develop interchangeable designs that exude the individualistic style Plutocracy is known for and encourage natural bliss,” explained Mitchell. Soon after, one of her designs was featured in an Alvin Ailey National ad campaign and a nomination for The Fashion Group International Rising Star Award in the Women’s Apparel category followed. Today, Michelle’s Plutocracy label is available in select boutiques and online stores.
Natasha Morgan, a fashion and accessories designer, who resides in New York City’s East Village, has made waves toward becoming the next style-star by garnering just as much media attention for what she wearing as for her three eye-catching luxury labels — Natasha Morgan Kore clothing line, Natasha Morgan Framed eyewear and Fabphonecase cell phone cases.
Hitting the bevy of parties, fashion shows and events during Mercedes Benz Fashion Week, Morgan, blazing her own unique personal style that intertwines inspiration from singer Grace Jones, London’s street-chic scene and Tokyo’s Harujuku Girl fabulousness, — sporting everything from spiked Mohawk style hair and colorful oversize designer totes to neon pink pants and her signature geometric and futuristic eyewear. The creative energy Morgan put forth helped to create impact for her brand during the weeklong fashion festivities. Publications such as New York magazine, PatrickMcMullan.com and other influential fashion portals featured Morgan as one of New York’s most stylish people.
Morgan’s personal style is not a far stretch from her fashion brand. “I design for those who are daring and fearless and always express themselves through fashion and style cause they are very confident in how they look and don’t care what other people think,” explained the Fashion Institute of Technology alum, who has been designing for 18 years. “I find it very seductive when anyone has enough confidence to take a chance and not play ‘follow the leader’.” Morgan’s Fabphonecase cell phone cases, which come in more than 20 different styles and cost from $59 to $180, are available online at www.fabphonecase.com.

The Global Fashion Front
With American & European designers using the backdrops and fabrics of Africa as inspiration, many African designers have found their own voice and inspiration by looking within to elevate the African fashion industry. In 2005, Lisa Folawiyo and her team of craftsmen burst onto the Nigerian fashion scene with a label named Jewel by Lisa (JBL). In less than five years, Lisa perfected the art of wearing Ankara textile, being the first to embellish the fabric with sequins, Swarovski crystals and beads, thus, establishing her line into a coveted luxury label. Starting out with Ankara skirts, the label has now expanded into designing a diverse range of dresses, skirts, tops, jeweled accessories, and soft furnishings.

Blacks in Wall Street and Beyond TRACY MAITLAND