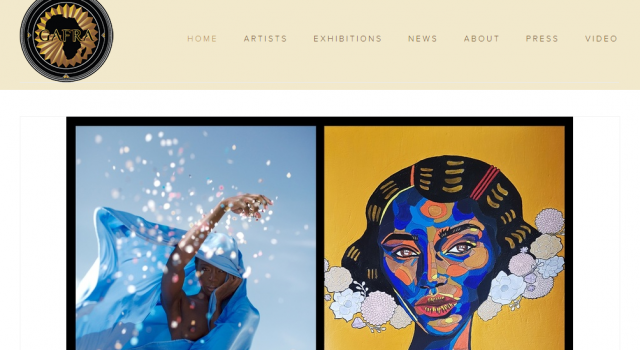 London has three galleries specialising in African art. Jack Bell has been there longest, and Tiwani Contemporary, which focuses mainly on Nigerian artists, was opened two years ago.

Now the Gallery of African Art has opened in Cork Street, and will display art from all over the continent. Its founder and director is the London-based collector Bendu Cooper, and this week sees the opening of Wordplay, a new show by the Los Angeles-based Ethiopian artist Wosene Worke Kosrof. He uses Amharic, the national language of his home country, to make painting and sculptures, but also draws on jazz, using the language symbols like notes in musical scores. Prices start from £15,000 to about £40,000.
The gallery has roosted in one of the Cork Street premises scheduled for revamping in two years’ time. “We will be looking for another space,” says Cooper. “But we think that within that time we will have been able to establish ourselves as a brand: we are pleased by the level of interest we have seen here already.”
See more about the Gallery of African Art here … http://www.gafraart.com/

Jack Bell Gallery opened in London in 2010. The focus of the gallery is to exhibit, represent and champion contemporary artists from around the world. The program includes twelve exhibitions every year as well as art fairs in London and New York. Gallery artists have been included in important exhibitions at the Venice Biennale, Stedelijk Museum, Brooklyn Museum, Grand Palais, Guggenheim Bilbao, Camden Arts Centre, Tel Aviv Museum of Art and Saatchi Gallery among others.
See more about the Jack Bell Gallery here… https://www.jackbellgallery.com

Founded in 2011, Tiwani Contemporary works with international contemporary artists. This gallery exhibits and represents international emerging and established artists, focussing on Africa and its diaspora. The gallery presents work through its exhibition programme and participation in art fairs.
In addition to its commercial activities, Tiwani Contemporary runs a public programme,Art Connect, supported by the A.G. Leventis Foundation. This provides a platform for discussing contemporary artistic practice through publications, talks and projects.
Tiwani website: http://www.tiwani.co.uk/

Black Art sections are also appearing in traditional Museums and Art Galleries.  We are researching more to add to this list.
“I see Africa as being like Asia in the 1990s” – so the renowned curator Hans Ulrich Obrist recently told me. Certainly there is growing interest in art from the continent and this is bolstered by museum collecting.
The Tate, London
Tate recently inaugurated an acquisitions committee for African art, and is about to open Meschac Gaba’s complicated installation work called “Museum of Contemporary African Art 1997–2002”. (Quote 2013)
Los Angeles County Museum of Art
The Los Angeles County Museum of Art  opened an African art gallery, (2013) which will show historical and contemporary works of art; it is building up its holdings in this field.
The V & A Museum, London
The V&A holds a variety of material relating to black heritage and culture, including fashion, photography and performance.  The V&A collections include many representations of African people in a variety of media, ranging from painted portraits, prints and photographs to images in illuminated manuscripts, stained glass and heraldic devices, as well as material relating to the slave trade and abolitionism.

Working in partnership with Black Cultural Archives, we identified and acquired photographs taken by black photographers, or which document the lives of black people in Britain, taken between the 1950s – 90s.

The aim of the seven-year collaboration was to raise awareness of the contribution of black Britons to British culture and society, as well as to the art of photography. Funded by the Heritage Lottery Fund (HLF), we have acquired 118 works by 17 artists. To complement the photographs, Black Cultural Archives collected oral histories from some of the photographers, their relatives, and the people depicted in the images.

How this 23-year-old became the only full-time black woman trader at the New York...