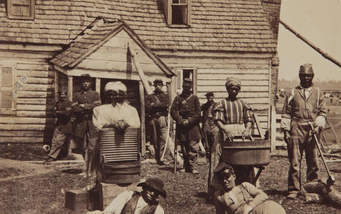 Dehumanised: White faces depicted – but not black slave faces
What do we mean by the legacy of slavery? Is it something measurable – or perhaps a feeling that echoes of a terrible past can still be heard today?

The legacy of slavery is one of the hardest issues in world history upon which to find agreement.

The sheer scale of the transactions of slavery – the untold cargo of people whose names, heritage and culture were extinguished – is, like the Nazi holocaust, almost impossible to take in.

But 200 years on there are voices around the world who say we still need to address the legacy of those events.

Steve Martin, a writer and historian of black history, says our failure to do so is a sign that we still cannot agree on the very basics of what the slave trade did to the world.

Mr Martin is an expert in the history of Britain’s built environment. He uses it as a springboard to debate the often unwritten contribution of minorities to the national story.

He says a simple test of our understanding of legacy is to look for physical reminders in countries which were part of the trade. Very often, they are there – but difficult to recognise.

Harewood House: Profits of slavery contributed to family riches
“Take the English country house and stately home,” he says. “Harewood House in Yorkshire, the home of the Lascelles family, for example. How did they make their money?

“Then there is [the Georgian] Queen Square in Bristol. You can walk through these places every day but how do you know the role that slavery played in their existence?

“The legacy of slavery in our environment is there – the rise of the gardening of Capability Brown can be associated with the wealth from slavery.”

If difficult questions are going unanswered – what are they?

Ken Barnes is the president of 100 Black Men of London. It’s a worldwide movement, born in the USA, which recruits successful black men to mentor the next generation.

Slavery panel: Send your questions
But Mr Barnes says this work does not take place in a vacuum: the legacy of slavery is everywhere for his members – and at its heart is racism.

“Slavery was used to justify and reinforce racism and allow it to become endemic [in Europe and the Americas],” he says.

“All of a sudden you have entire peoples seen as sub-human; if someone is sub-human then the slaver is justified in what he does.

“This even affects the way black people today perceive themselves. Ask people what it is to be black. Black is associated with rap music, with being lazy and uninterested in society. These are traceable back to the racism of slavery.”

This is one of the most challenging arguments of the legacy debate: how much can the racism of the past be blamed for the racism, culture or inequalities of today?

Two of the most provocative areas for legacy theory are the caricatures of black male sexual prowess and sporting achievement. The suggestion is that today’s stereotypical images were born out of slave owners’ preference for the most athletic specimens from among their stock.

Two centuries of these stereotypes and pseudo-science have arguably left a deep psychological scar on society – both in white perceptions of black people and the responses of some black people to that projection.

This may sound entirely theoretical but is a deeply sensitive issue. The Bell Curve was one of the most controversial American books of recent times.

Empower people and look at their self-identity … the key factor for any young person is how expectations of how they will turn out are reinforced and in turn influence behaviour
Ken Barnes, 100 Black Men

The authors said their results were scientific. The critics said a straight line ran from the theory to some of the thinking of slavery.

Ken Barnes says the effect of these generations-old stereotypes can be seen most starkly in the disproportionately poor educational results of black boys when compared with other groups.

“There is an expectation of failure for black children in schools,” he says. “And it comes down to how they are historically perceived by the school system.

“Society’s continuing image of black men affects the way teachers address the children. But this is a vicious circle. If you continually tell a child that it is naughty then it will act that way.”

However some of the legacy arguments have their critics. Last year, an award-winning BBC drama sparked a furious row when its central character, a black teacher called Joe, asked why everything bad that had ever happened to him had involved someone who was black. In one memorable scene Joe tells people to “get over slavery”.

Barack Obama: “Suffered enough” as a black man?
Critics of award-winning playwright Sharon Foster (who is black) accused her of pandering to racists.

In reality, the film exposed the tensions within black community politics – and a failure to agree on how to progress on legacy issues such as slavery, racism and modern identity.

On the other side of the Atlantic, the presidential contender Barack Obama has faced a hint of this political storm. One genealogist has claimed he discovered evidence that Obama’s mother, who is white, is a descendent of slave owners. For some activists at least, Obama has therefore not suffered enough as a black man to be able to speak for African Americans.

Historian Steve Martin says the starting point is an open and frank engagement on the issues – particularly by white people.

“Slavery is very much a case of don’t mention the war,” he says.

“It’s a total emotional trigger and for many people it can’t be discussed rationally.

“Many people don’t want to talk about it or would even attack someone for bringing it up. But when I focus on the built environment -that can’t be walked around – it’s there and it’s a history that’s part of them too.”

“What you need to do is instil hope,” says Ken Barnes.

“Empower people and look at their self-identity. The key factor for any young person is how expectations of how they will turn out are reinforced and in turn influence behaviour.”