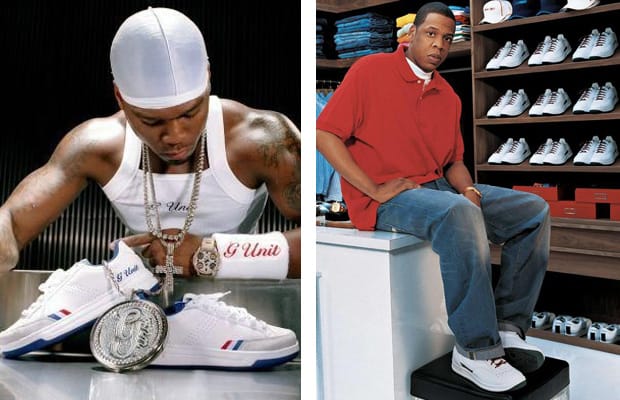 by Rajah Allarey
(first published MAR 31, 2014)
In a recent interview with Revolt, Curtis “50 Cent” Jackson went on record stating that his Reebok G-Unit sneakers outsold Jay Z’s S.Carters by a whopping six to one margin. In numbers, Curtis states that he sold over 3.8 million pairs of sneakers.
The deal made news at the time on Adage
” Reebok International has shot a commercial that features hip-hop stars 50 Cent and Jay-Z, two of the hottest and most controversial artists in the music business.
The ad comes on the heels of a deal with 50 Cent to produce a signature footwear collection — just six weeks after Reebok enjoyed immense sales success with a similar shoe line for Jay-Z. With such rivals as Nike and Adidas focused heavily on sport, Reebok is hoping the addition of music to its marketing mix will give it an edge with the young, urban audience.”
2002-2003 was a much different era of sneakers than what most sneakerheads are accustomed to today. You actually had more than 20 seconds to buy a hyped shoe before it sold out online. It was also around this time that both artists released their respective sneakers under Reebok. 50 claims he made $80 million off the deal, and this isn’t the first time the rapper has mentioned it. However, it is the first instance of him comparing his sneaker’s performance directly to Hova’s. For those that remember the releases, you might recall that the S.Carters were made in more limited numbers while the G-Units seemed to be a mass market play. If that was indeed the strategy, the 50’s claims aren’t that far-fetched.
In what heads might consider the bigger story, Reebok’s decision to sign the artists stemmed from its inability and failure to sign LeBron James whom we all know eventually inked a deal with current sponsor Nike. Did Reebok actually have a chance at James? Chances were probably slim but he did rock Reeboks for a few games in high school which Packer Shoes recently commemorated earlier this year in its “Players Only” Pack.
It appears that the sneakers are no longer sold. The goose that laid the golden egg did not survive long term. 50 cents have moved on to other projects, with his most profile being the series Power on television. And Reebok has lost the credibility on the streets that it once had.
Perhaps a similar deal in 2018 could get 50 cent out of the current financial problems caused by his bankruptcy. His people need to talk to the right sports manufacturer, to make this happen.