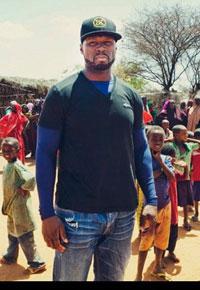 n 2011, 50 Cent (Curtis James Jackson III) announced the debut of his new energy drink, SK (Street King). It was developed by the musician and businessman to not only pump up his own bottom line, but also raise money for starving populations in Africa. With the purchase of every energy shot, Street King will provide a meal for a child in need. The goal is to feed 1 billion children over the next five years.

He is now seeking business partners from Africa to be sole distributors of SK. Simon Ateba, senior correspondent at one of Nigeria leading newspapers, The News Magazine/P.M.NEWS, says it’s a win-win for Africa. “50 Cent is a global brand. He’s known in Africa as a successful rapper and a brother, being an African American. I believe, as many people do, that there is no doubt he is adored by millions of Africans, or at least, known by millions of people here,” Ateba points out. “I don’t think it will be difficult for him to connect with ordinary Africans or find distributors because everyone likes to be associated with successful people, successful Americans.”
According to reports, Jackson wants a partner in each African country. Ateba says that while Africans will be more the receptive to the idea of partnering with Jackson, there may be some hurdles attracting consumers- “From the streets in the United States to where he is today, 50 Cent represents the aspirations of many Africans who have been stuck in squalor and despondency. 50 Cent is a positive and visible brand here in Africa and it’s a brand that will, without a doubt, be easy to sell here,” notes Ateba. “The only challenge, and a big one, is the product he intends to sell on our continent. Energy drinks have received bad press here because of the caffeine they contain and the way they are packaged. If taken regularly, they often leave many people dehydrated and can cause high blood pressure and other cardiovascular diseases. Africans are already living in abject poverty but do not want to be killed by drinks that contain dangerous substances and are packaged with large amounts of sugar and herbal stimulants.” (Each 2.5 fluid ounce shot Of SK is comparable to a cup of coffee but contains no carbs, calories and sugar.)
According to Ateba, the SK team will have to convince potential consumers of the health benefits of the drink. While the drink is based on the natural source of caffeine from coffee beans, it contains no artificial colors and each flavor has different vitamins and natural supplements.
“It is a good brand (50 Cent) with a controversial product (an energy drink). If the safety of those who consume it is improved or guaranteed, he will do well. If not, he will fail. If people remain skeptical as they are today about their health, it will be a flop and a waste of time and resources,” says Ateba.
He also notes that the partnerships could be a big boost for African businesses, and Africans in general. “It will create jobs and wages for Africans and that’s a boost for ailing African economies. It will also give many Africans concrete reasons to dream, to think big, to believe that we can go from the street to realizing our dreams and helping others. Africans are as intelligent as Americans but with very limited opportunities,” says Ateba. “Africans need African models, people they can emulate, people who were just like them, who went through hell on earth but did not stay in the heat, people who went past the hunger, hardship and bitterness, and emerged successful and positive. To me, having gone from eating dust or palm oil with only salt, water with only sugar, to getting a college degree today and becoming a successful writer, I know a 50 Cent as a brand is more inspirational than it is just to quench thirst.”