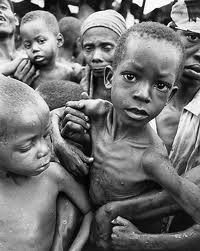 Poverty in Africa is the sole cause of hunger, disease, aids and squalor. One cannot talk about poverty and its effects on the African continent without taking a look at the roots of the problem. European colonialism and the scramble for Africa were partly to blame. But the world has changed and African countries are now independent nations, so one can now charge that African leaders are now responsible for the poverty problem throughout the African continent.

Poverty in the developing world has become one of the biggest challenges facing not only the leaders of those countries, but also the developed world, as well. After over 80 years of colonial rule in Africa, and about five decades of independence, it is a known fact that poverty has actually gotten worse in the Sub-Saharan Africa.
What are the causes and effects of poverty in Africa you may ask? Well there are no simple answers. This article takes the position that poor leadership and mismanagement may be responsible for the declining state of African poverty.
One can actually argue that during the colonial days, Africa was actually exporting food to many overseas jurisdictions. This situation was the result of the colonial administration objectives to export cash crops to Europe. Such cash crops were used in the emerging European industries, resulting from theindustrial revolution.
As a consequence, colonial administrators placed larger emphasis on agriculture, today investments in agricultural production has declined in proportion of the Gross Domestic Product of Sub-Saharan African States.
Africa south of the Sahara, with some 650 million people, and over 10 percent of the world’s population, has just 3 percent of its trade and only 1 percent of its Gross Domestic Product. But today colonialism has been totally wiped out of the scene, one may argue, like Kwame Nkrumah once argued, that while direct political control of African nations have been handed back to Africans a new state of affairs has been born.
This time according to Nkrumah, it is known as neo-colonialism, which is simply the process through which the colonizers still maintain economic control of such nations through helping favorable regimes to attain power. But who should be blamed for this, none other than African leaders themselves.
Agriculture which holds the key to eradicating farming and poverty within the continent, is often neglected by corrupt and inept political leadership throughout the continent. Africa has some of the best farmlands in the world, and with the exception of the Sahara desert region, most other parts of Africa could be converted into great farmlands as was the case in the former Apartheid South Africa, or Colonial Zimbabwe.
The fact that South Africa and Zimbabwe were net exporters of food during the colonial days, only helps to illustrate the point being made here that today’s poverty problems and other economic problems were the end product of the bankruptcy of the ineffective and mediocre leadership in place in most African countries.

Other problems contributing to Poverty in Africa
From time to time, some parts of Africa are prone to drought, but this paper takes the position that drought constitutes a very negligible aspect of the problem of poverty in Africa. Technological innovation could be adopted to deal with the issue of drought as has been demonstrated in Israel. The core problem in Africa is bad government and poor management of the people’s resources. Africa holds the majority of the world’s natural resources, but the continent is suffering from the leadership crisis, which is basically symptomatic of all the African states.
Effects of Poverty on the African Continent
Wars and Conflicts-Ethnic conflicts and wars are endemic in most regions of the Sub-Saharan Africa. From religious conflicts and riots in Nigeria, to Ivory Coast and Liberia, and from the Arab genocide against native Sudanese to the Congo, the entire region is riddled with tribal conflicts. These problems again go to the heart of management and leadership ineffectiveness, which is the central thesis of this paper.
A few years ago the world watched the genocide in Rwanda, and the slaughter of over 800.000 human lives, while the whole world watched. Poverty in Africa results in hunger, epidemics of disease such as malaria, cholera, Aids and high infant death rates, and a lowering of the overall living standards in the African countries.
These problems are in part the result of the inept leadership, which has continued to run down the entire region. While democracy is gradually taking hold in a few states in Africa such as Ghana, these states and others are yet to elect a new breed of politicians with no ties to the old and croaked power structure, which continues to find its ways to the heart of the leadership circles in these states.
Ghana may have made more progress in this direction suffices to say, that a lot more work needs to be done. Even some theorists now believe that economic development alone cannot solve the problem of poverty in Africa.
Conclusion
Since the era of colonialism began to crumble, the inequalities between the haves and the have-nots have increased in much of the continent. Basically much of Africa belongs to two classes, the super rich and the poor. The syndrome of middle class is still in its infancy. What does this relationship tell us? It is inescapable not to conclude that the rich class in Africa has managed to keep everyone else from moving out of the poverty circle where everybody else belongs.

Often the problem of poverty in Africa is interrelated to other social and economic problems facing the continent. Many experts also believe that the trade relations between African States and the West are contributing in many ways to the poverty problems in the continent. African debts owed to Western institutions are estimated to exceed $200 billion. While some Western nations are open to forgiving such debt, others remain opposed to such idea.
This article examined the various issues contributing to poverty in Africa as well as the effects of poverty on the African people. While there are many other issues involved in the perpetuation of this problem, the writer maintains that African leaders and governments hold the key to the eradication of the poverty problem.
African governments should endeavor to first of all clean itself up; problems of embezzlement and mismanagement, if unaddressed, will guarantee that this problem remains unresolved regardless of how much assistance Africa receives from the West. This paper also believes that the West can play a big role in this process.
However the governments and peoples of the Sub-Saharan Africa must take the first step by cleaning its house, and instituting a corruption free progressive government led by capable, competent, qualified, progressive leaders, chosen through a clean election process if the problem of poverty in Africa would ever be effectively addressed.

Bk Chat London – How they Started

Meghan Markle’s Message For The Next Generation Of Women Leaders