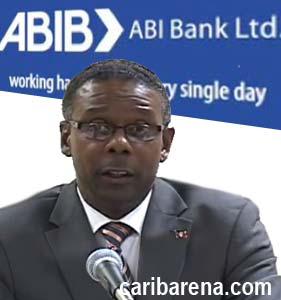 Antigua St John’s – Minister of Finance, Economy, and Government Administration Harold Lovell has revealed further details on the bailout of the Antigua and Barbuda Investment Bank (ABIB) after its near-collapse in July.

At the time, the government waited until the 11th hour to announce the $40 M bailout it had pumped into ABIB during the year. It said the intention was to prevent panic that could have resulted in the overnight collapse of the indigenous financial institution.
Caribarena.com was aware of the bank’s financial dilemma and possible takeover since around March, and had contacted Minister Lovell for a comment on the government’s way forward on the situation. At the time, the minister declined to comment on the record, and asked that this publication tread carefully with any news item on the subject.
But speaking over the weekend on a radio programme, Lovell told the nation that the money used for the bailout initiative was in fact borrowed from avenues previously earmarked for other investments.
And while the investment may have bought the bank some time and facilitated the smooth takeover by the ECCB, it has affected relations with the International Monetary Fund (IMF) and its Standby Arrangement (SA) with the government.
The Minster said the money came from loans the government acquired from the local banking sector and that this money was put into ABI Bank, ‘to protect the interest of depositors’.
“They are funds that have been given by way of support for ABI to ensure that ABI could continue to function, and we could provide an implicit guarantee to all depositors… We were protecting depositors and saving jobs,” the minister said about the $40 M.
According to Lovell, “There is talk about what we referred to as SDRs (Special Drawing Rights). This is money that you can draw on that is made available by the International Monetary Fund (IMF). We had these funds made available to us so that we could use them for financial stabilization, but there was a condition attached.”
Lovell suggested the IMF would likely not have agreed with the government’s approach, since under American standards, it would normally have taken the classic approach, ie to liquidate the bank – something the government was not prepared to do.
“We have held a very clear and firm policy decision… The view of the government of Antigua & Barbuda, supported by the Central Bank, has been that ABI must be approached as a growing concern,” Lovell said. “And that is because the realities of the Eastern Caribbean differ from the United States. In these islands… the government is the one who steps in to make sure that depositors’ monies are safe.”
He added it was on the policy level that the government made the decision to provide aid to ABI Bank, and that is why the new approach with the IMF is for the country to re-examine the situation, since when the Standby Arrangement was negotiated in 2009/2010, ABI was not a factor.
“ABI has become a factor, so it means we will have to look to see what the impact will be for Antigua & Barbuda,” Lovell said.
Mutually, the minister said, the government and the IMF will have agreed that they would defer the reviews that would trigger disbursements under the SA, while they review the position and work toward a resolution strategy. This means the IMF will not make any deposits under the SA until further notice.
“We understood the consequences of our action, and so with mutual agreement we said this is the way we see it and this is this is the way we will do it,” Lovell said. “So our position has been one of Antigua & Barbuda taking a policy position that we felt was in the best interest of the people.”
Earlier this year, the ECCB took over ABIB with the support of the government of Antigua & Barbuda. The ECCB provided the management expertise and co-ordination in having all other members of the monetary corporation being fully on board and aware of what is happening locally. The money for the takeover came from the government, not the ECCB.
Further, Lovell clarified that the money pumped into ABI Bank by the government was not actually to pay off its own loan with the bank, contrary to suggestions.
In this regard, he said the government’s loans at ABI Bank are still in effect, and are current, with no arrears. He said the government pays about $1.5 M monthly to service that debt. There is also another loan with the bank in relation to the St John’s Development Corporation that is also current and being paid monthly, but at a much smaller amount. There are no arrears, he assured.

20 Facts on Electricity in Africa