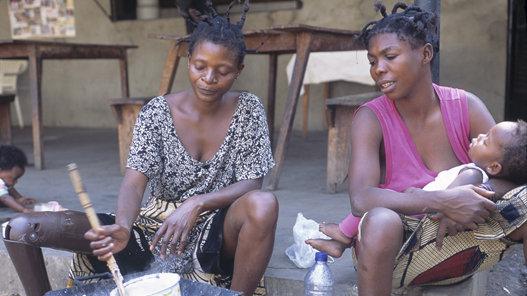 Despite its natural resources, Africa is the world’s poorest continent, and every third African does not have enough food.
Many African countries are affected by a precipitation change with alternating floods and recurring draughts; especially in northern and southern Africa the rain does not fall in the way it used to, and the crops do not grow the way they used to. Climate changes continually make it more and more difficult to feed the continent’s 900 million inhabitants.

Throughout the 1990s AIDS became Africa’s most severe hindrance to development. In some countries, nearly half of the citizens of working age were infected, and it threatened all positive social development.
After a 30 year long fight against the disease, in many countries the number of people who become infected is now dropping; nevertheless, information about modes of transmission and protection is still needed. Women still do not have authority over their own lives and millions of people who live with HIV in their bodies do not have access to the life-sustaining ARV medication.
These years, several African governments are making it gradually more difficult for the NGOs to do their job by introducing new laws that forbid NGOs to inform people about their rights. On the entire continent, corruption is a significant problem, the system of justice is not impartial, and oppression and assaults on women are widespread.
The majority of the world’s civil wars take place on the African continent. But when the wars are over, landmines and unexploded ammunition are left behind and make it extremely dangerous to move about, and the consequent fear of cultivating the land prevents tens of thousands from taking the first steps to creating a sustainable future for themselves and their children.