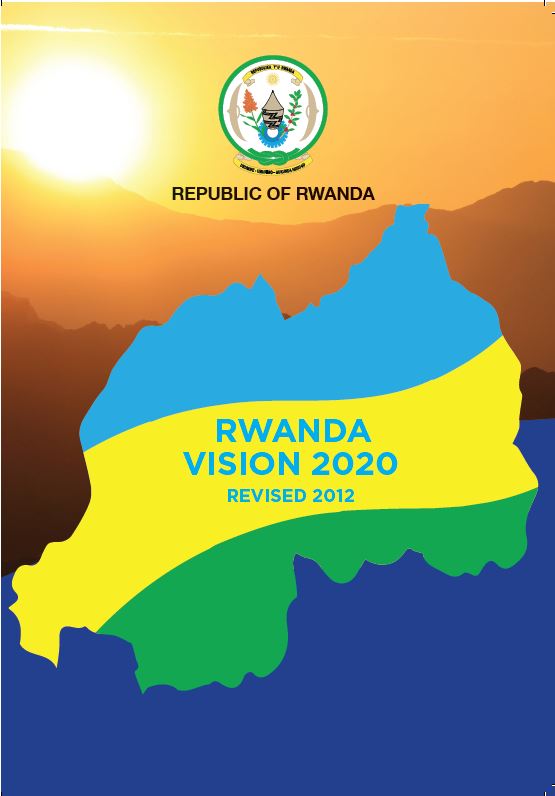 Rwanda gave itself 20 years to develop its country out of the ashes of the genocide which occurred in the 90s.
Vision 2020 is a government development program in Rwanda, launched in 2000 by Rwandan president Paul Kagame.  Its main objective is transforming the country into a knowledge-based middle-income country, thereby reducing poverty, health problems and making the nation united and democratic.
The programme consists of a list of goals which the government aims to achieve before the year 2020.
These are:
Good governance
An efficient state
Skilled human capital, including education, health and information technology
A vibrant private sector
A world-class physical infrastructure
Modern agriculture and livestock
History
In the late 1990s, president Paul Kagame and his government began actively planning methods to achieve national development. He launched a national consultation process[2] and also sought the advice of experts from emerging nations including China, Singapore and Thailand.
Following these consultations, and shortly after assuming the presidency, Kagame launched Vision 2020.The major purposes of the programme were to unite the Rwandan people and to transform Rwanda from a highly impoverished into a middle income country.

Vision 2020 is a framework for Rwanda’s development, presenting the key priorities and providing Rwandans with a guiding tool for the future. It seeks to transform Rwanda into a middle-income country by the year 2020. This will require achieving annual per capita income of USD900 (USD290 in the year 2000), a poverty rate of 30% (64% in the year 2000) and an average life expectance of 55 years (49 years today in the year 2000).
The framework includes the rehabilitation and development of infrastructure as a crucial aspect in lowering the costs of doing business. It calls for:
(i) a modern land law providing security of tenure and freedom of exchange;
(ii) the development of alternative lower costs of transport to the sea; and
(iii) increase of energy production and diversification into alternative energy sources.
Rwanda has considerable hydroelectric potential, in addition to large deposits of renewable methane gas in Lake Kivu, estimated at 60bn m3. In rural areas direct solar energy or photovoltaic energy can be used, whilst up to 1/3 of 155m tons of peat deposit is currently exploitable. Rwanda projects that by 2020, at least 35% of the population will be connected to electricity (up from the current 6%).
Vision 2020 recognises sustainable environmental and climate change management as a cross-cutting pivotal area to the realisation of national aspirations. It recognises that the major problem in environmental protection is the imbalance between the population and the natural resources. This leads to alarming degradation observed through massive deforestation, the depletion of biodiversity, erosion and landslides, pollution of waterways and the degradation of fragile ecosystems.
To protect the environment against massive deforestation and soil destruction, Vision 2020 sets the target for the protection rate against erosion to rise from 20% in 2000 to 90% by year 2020. To ease the pressure on wood biomass seeing that 86.3% of the Rwandan population uses wood as the source of energy, Vision 2020 targets to drop the use of wood energy in national energy balance, to 50% by 2020 through diversification of energy sources availed to the population.
In 2012, a review of the Vision 2020 document was carried out. The report produced can be found here…

Is CBD Really as Safe as People Believe?