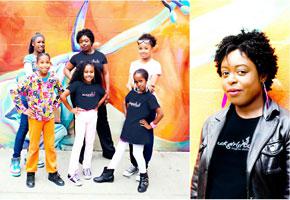 The problem, still exists—a lack of African American women in the tech world. Black Girls Code recently launched a campaign called IndieGoGo to help close the digital divide.     “There is still a great disparity in underrepresented communities in terms of access to technology on several fronts. Broadband access lags the national average significantly in communities of color and although minorities are early adopters of mobile technologies, we still don’t see students of color with the same access to computers in either their homes or schools. Computer science curriculum is also nearly non-existent or inadequate in public schools (and some private institutions) across the country.

All of these factors contribute to creating a technically and digitally disconnected community and thus the digital divideis still a very relevant issue in these communities. This has severe implications for the education of our youth today,” says BlackGirlsCODE founder Kimberly Bryant.
BlackGirlsCODE is an Oakland, Calif.-based organization whose mission is to educate girls of color ages 7 to 17 in digital media and computer programming. IndieGoGo is a crowd-funding campaign that hopes to raise money in order to provide laptops for programming classes, student scholarships and instructor stipends.

“Our motivation for initiating the IndieGoGo campaign was driven by a need to fund our rapid growth and expansion and to provide some much needed support for infrastructure materials (i.e. laptops),” explains Bryant. “When we launched our Summer of Code campaign we saw tremendous growth in our class sizes with enrollment increasing from an average of approximately 10-12 students to almost 80 students in several of our classes. Most of these students did not have access to computer equipment at home, which would allow them to participate in our workshops so a key component of our campaign was to raise funds for the purchase of a mobile computer lab that would meet our students’ needs. Prior to the summer we attempted to acquire funding from the more traditional methods (grants, sponsorships, etc) with little success so we decided to launch agrassroots crowd-funding campaign to leverage the strong support that we have within the community. It was very successful and we actually exceeded our original fundraising goal prior to the close of the campaign.”

BlackGirlsCODE aims to expand its reach beyond Oakland to such cities as Chicago and Atlantathis fall. “Our goals are to expand BlackGirlsCODE to cities across the U.S. over the next three years and into Africa and Latin America within the next 5-10 years,” announces Bryant. “We plan to build upon the success of our Summer of Code program with ongoing classes in multiple cities throughout the end of 2012 and into 2013. We are calling this effort our BlackGirlsCODE “Season of Code”. We have already reached our goal of providing computer-programming training to more than 200 students of color this summer and are only halfway through our campaign. We want to expand on this success and bring workshops to the more than 30 cities that we have received requests for BlackGirlsCODE programs across the country. The success of the Summer of Code effort has allowed us to confirm that our model is sound and ‘fundable´. We hope that key foundations as well as technology/STEM companies will recognize the success of our programs and provide us with the support we need to continue this very important work.”