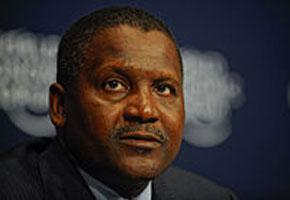 In a highly controversial move, Nigeria has reinstated the Africa’s richest businessman, Aliko Dangote, as the head of the Nigerian Stock Exchange.
Dangote won an appeal to be reinstated as president of the NSE after being ousted two years ago due to allegations of corruption in March 2010. Dangote, whose African cement empire–Dangote Cement–is worth an estimated $11 billion, and was initially elected NSE president in August 2009.

But it was alleged that Dangote was involved in shares tampering in regards to Forte Oil. He was accused of manipulating Forte Oil’s shares, which led to the shares dropping five percent in a single day. Following this accusation, the stock exchange found him innocent. The court, however, overruled the decision and stopped Dangote from actually taking the post.
He was recently acquitted of wrongdoing by the Court of Appeals in Lagos, but the move has been clouded with controversy.
“It’s a controversial move because the original allegations against Dangote center on share manipulation and insider trading,” explains Andrew Schrage, co-owner of Money Crashers Personal Finance, an online guide to money management and global finance. “And with the fact that he owns such a significant portion of the market (roughly 25%), the claims of a conflict of interest can’t be ignored. Some say an outsider with no direct ties to the market would be a better fit for the post, such as Ngozi Okonjo-Iweala. She is a top Nigerian economist who recently lost out in a bid for the presidency of the World Bank.”
Because of the backlash over the Dangote decision, the battle for the top NSE will most likely continue. “Although the courts originally blocked Dangote’s election to the post, he recently had this decision overturned on appeal,” notes Schrage “It seems that the battle is not over, as this ruling is being appealed by the Independent Shareholders Association of Nigeria, which also says that other cases are still pending against Dangote. Therefore, his reinstatement seems tenuous.”
With the Nigerian government and business world constantly under scrutiny, Dangote’s reappointment might not bode well for the NSE’s global reputation. “The effect on the Nigerian Stock Exchange remains to be seen. Dangote claims that his first job is to continue with current reforms to return market confidence and transparency. But if it turns out the manipulation in fact did occur, who’s to stop him from doing it again?” observes Schrage. “On the other hand, if he remains true to his word, it could be beneficial. The NSE is currently plagued with accusations of corruption. It’s obvious that the market is in turmoil at the moment. It seems as though it’s an all-or-nothingplay. If his election stands, Dangote can either return the market to some form of credibility, or line his pockets and bring it to its knees.”