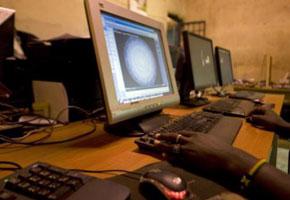 With Broadband, Internet service is not only faster but less expensive allowing more people to jump onboard the Web Express. And now the African nations of Namibia and Botswana have Broadband.
Namibia and Botswana recently linked up to an 8,700 mile-underground cable system that provides faster and cheaper Internet connectivity.

While the $750-million fiber optic submarine West African Cable System offers positive changes, there may be a downside notes Steve Santorelli, who is in Internet Security Research at Team Cymru Research NFP, an Internet security research firm and non-profit dedicated to making the Internet more secure.
“This ushers in a new communications medium at a (hopefully) drastically reduced price for access. It will change lives, but also bring with it some challenges that haven’t been faced in these countries before,” he says. “Cheap hosting and ubiquitous high-speed Internet attracts malware and other elements of cyber crime infrastructure. That puts a financial and social drain on the local economy and fighting that takes skill and contacts. But Africa-CERT and other groups are progressing so strongly and rapidly. The future is in fact looking quite bright for Africa.” (Africa-CERT is an organization that promotes cyber security in Africa.)

The two countries must be diligent in making the access secure for users, says Santorelli. “They will have to grow their local response capabilities to protect their network users, and do it in a way that is compatible with the ethos of the Internet being a global tool for freedom, not repression. Hopefully, commerce will drive this, not nation states, making the African Internet Revolutionsustainable,” says Santorelli, who previously work at Scotland Yard’s Computer Crime Unit in London.
With most of the world using some form of Broadband Internet, why did it take Namibia and Botswana so long to adopt the service? “Money, naturally. The investment is huge for any country, let alone parts of the developing regions. Clearly, the return on that investment has only just been worth the risk,” concludes Santorelli.