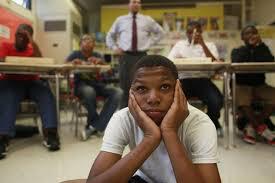 An achievement gap separating black from white students has long been documented — a social divide extremely vexing to policy makers and the target of one blast of school reform after another.
But a new report focusing on black males suggests that the picture is even bleaker than generally known.

Only 12 percent of black fourth-grade boys are proficient in reading, compared with 38 percent of white boys, and only 12 percent of black eighth-grade boys are proficient in math, compared with 44 percent of white boys.
Poverty alone does not seem to explain the differences: poor white boys do just as well as African-American boys who do not live in poverty, measured by whether they qualify for subsidized school lunches.
The data was distilled from highly respected national math and reading tests, known as the National Assessment for Educational Progress, which are given to students in fourth and eighth grades, most recently in 2009. The report, “A Call for Change,” is to be released Tuesday by the Council of the Great City Schools, an advocacy group for urban public schools.
Although the outlines of the problem and many specifics have been previously reported, the group hopes that including so much of what it calls “jaw-dropping data” in one place will spark a new sense of national urgency.
“What this clearly shows is that black males who are not eligible for free and reduced-price lunch are doing no better than white males who are poor,” said Michael Casserly, executive director of the council.
The report shows that black boys on average fall behind from their earliest years. Black mothers have a higher infant mortality   rate and black children are twice as likely as whites to live in a home where no parent has a job. In high school, African-American boys drop out at nearly twice the rate of white boys, and their SAT  critical reasoning scores are on average 104 points lower.
The analysis of results on the national tests found that math scores in 2009 for black boys were not much different than those for black girls in Grades 4 and 8, but black boys lagged behind Hispanics of both sexes, and they fell behind white boys by at least 30 points, a gap sometimes interpreted as three academic grades.
The search for explanations has recently looked at causes besides poverty, and this report may further spur those efforts.
“There’s accumulating evidence that there are racial differences in what kids experience before the first day of kindergarten,” said Ronald Ferguson, director of the  Achievement Gap Initiative at Harvard. “They have to do with a lot of sociological and historical forces. In order to address those, we have to be able to have conversations that people are unwilling to have.”
Those include “conversations about early childhood parenting practices,” Dr. Ferguson said. “The activities that parents conduct with their 2-, 3- and 4-year-olds. How much we talk to them, the ways we talk to them, the ways we enforce discipline, the ways we encourage them to think and develop a sense of autonomy.”
The report urges convening a White House conference, encouraging Congress to appropriate more money for schools and establishing networks of black mentors.
What it does not discuss are policy responses identified with a robust school reform movement that emphasizes closing failing schools, offering charter schools  as alternatives and raising the quality of teachers.
The report did not go down this road because “there’s not a lot of research to indicate that many of those strategies produce better results,” Mr. Casserly said.
Other have a different response. The key to narrowing the achievement gap, said Dr. Ferguson, is “really good teaching.”
One large urban school district that has made progress is Baltimore’s, where the dropout rate for African-American boys declined to 4.9 percent during the last academic year, down from 11.9 percent four years earlier. Graduation rates for black boys were also up: 57 percent in 2009-10, compared with 51 percent three years earlier.
Andres A. Alonso, the chief executive of the Baltimore City Public Schools, said the improvement had little to do with changes at the margins, like lengthening the school day or adding mentors. Rather, Mr. Alonso cited aggressively closing failing schools, knocking on the doors of dropouts’ homes to lure them back and creating real-time alerts — “almost like an electrical charge” — when a student misses several days of school.
“Hispanic kids and African-American kids this year had a lower dropout rate than white kids,” Mr. Alonso said.