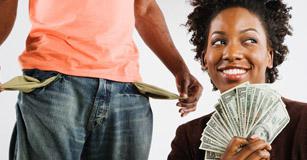 Who is the first Black person that comes to your mind when you think of wealth?  Probably 99 out of 100 of us think of Oprah Winfrey, followed by Bob Johnson and his ex-wife, Sheila Johnson, and then on down the line with the likes of Michael Jordan, Earvin “Magic” Johnson, and Tiger Woods.  Let’s not forget about P Diddy (or whatever his name is these days), Jay Z and Beyoncé, Tyler Perry, and Bill Cosby. Sadly, we’d probably leave Dr. Michael Lee-Chin and the Roberts brothers, Michael and Steven, off the list because they choose not to be as visible and flamboyant as the others.

The estimated net worth of the top twelve Black tycoons in this country is approximately id=”mce_marker”0 billion, with Oprah leading the pack at a robust $2.7 billion.  Following are athletes, entertainers, corporate execs, and entrepreneurs – not necessarily in that order, which comes to an additional estimated id=”mce_marker”0 billion.  That’s a lot of “jack” as they say; makes those folks who are “only” millionaires look poor.
Now most of us know that Warren Buffett and Bill Gates alone have  more than id=”mce_marker”00 billion in net worth. Heck, the mayor ofNew   Yorkis worth $25 billion!  What does that tell us about the so-called “wealth gap” disparity between Blacks and Whites that has once again raised its ugly head?  What it tells me is that we had better not go for the distraction of trying to get even, which would be an exercise in futility.  Closing the wealth gap is a worthwhile cause, but getting even is out of the question.
There is another group of Black folks we should be cognizant of when it comes to wealth: Africans. Those of you who still have images of Tarzan movies in your mind, and those of you who picture Africa as “theDark Continent” are in for a pleasant surprise.  While we know about all the natural resourcesAfricapossesses, despite it being called by some the “poorest” continent, we should learn more about its “official” 54 countries.  Pull up some photos of the cities in various countries and you will notice they look just like American cities.  Prior to his transition, Brother George Subira would bring large posters of African cities to any conference he attended.  I bought one for my daughter when she was very young so she would not grow up like I did – cheering for Tarzan.
To add even more positive information about the land from which we came, there are three men and two women whose collective wealth is more than $37 billion. According to the latest Forbescalculations, Aliko Dangote of Nigeria tops the list with a net worth of more than id=”mce_marker”6 billion.  Mohammed Al-Amoudi, with a net worth of id=”mce_marker”3 billion, is said to own more than 70 percent of all the oil in Ethiopia and produces four tons of oil per year.  Mike Adenuga, a Nigerian who made his fortune in oil, telecommunications, and banking, is worth about $4 billion.  African females, Folorunsho Alakija of Nigeria, and Isabel dos Santos of Angola, billionaires themselves, also stand out as some of the wealthiest people in the world with more than $5 billion in net worth.
Our images of Africa and Africans must be couched in reality, not myth and certainly not stereotypes promulgated by those who want us to think Africa is not worth anything.  Black Africans are leading the world in wealth creation and growth, and we should be proud of the brothers and sisters who have turned the tremendous natural resources ofAfricainto billions of dollars for themselves and their families.  Notwithstanding other Africans such as the Oppenheimers and their diamond empire, along with other Europeans who benefitted from the Berlin Conference of 1884-1885 to divide Africa, Black folks have made significant strides in the Motherland.
Let’s work to change the perception of Africa, especially among our young people, as they will be exposed to the many opportunities therein.  As they approach adulthood and begin to choose careers and business strategies, they should have information about Africa so they will not continue to see Africans in a negative light, the way many of my generation were taught.  Believe me, the Chinese, Lebanese, and Indians have not missed the opportunity.
Don’t hate.  Don’t rationalize African prosperity with corruption excuse.  Yes, corruption exists, but you don’t have to look all the way across the ocean to find it.  Just look around here in the U.S.  Congratulations to all of those Africans who are taking care of their business and doing quite well at it.  They have capitalized onAfrica’s natural resources, in many cases starting from meager beginnings, and used what they had to become some of the wealthiest people on earth.

Antigua and Barbuda is one of the Caribbean's most prosperous nations