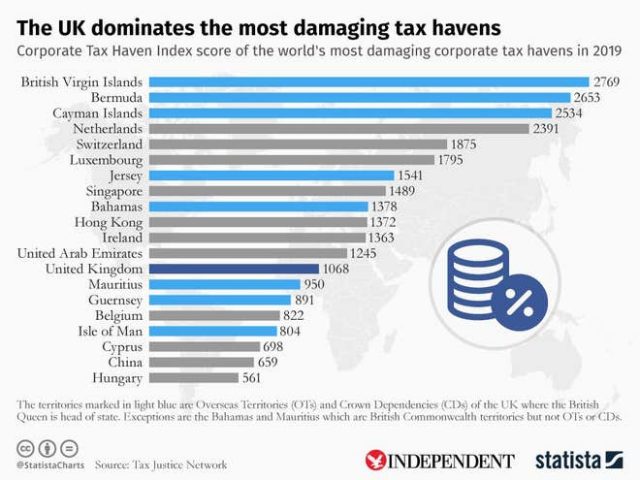 The writer: Ben Chapman
Date first published: 28 May 2019
The UK  is by far the world’s biggest enabler of corporate tax dodging, helping funnel hundreds of billions of dollars away from state coffers, according to an international investigation.
Of the top 10 countries allowing multinationals to avoid paying billions in tax on their profits, four are British overseas territories.
Chancellor Philip Hammond has pledged to crack down on multinationals like Google and Amazon that boost profits by shifting huge sums through low-tax jurisdictions.
But an index published today by the Tax Justice Network found that the UK has “single-handedly” done the most to break down the global corporate tax system which loses an estimated $500bn (£395bn) to avoidance.
The amount dodged globally each year is more than three times the NHS budget or roughly equivalent to the entire Gross Domestic Product (GDP) of Belgium. Tax haven territories linked to Britain are responsible for around a third of the world’s corporate tax avoidance risk – more than four times the next greatest contributor, the Netherlands.
Topping the list was the British Virgin Islands, followed by Bermuda and the Cayman Islands – all British overseas territories. Jersey, a Crown dependency, was seventh while the UK itself comes in thirteenth.
Alex Cobham, chief executive at the Tax Justice Network, described the hypocrisy of rich nations which enable tax avoidance as “sickening”.
“A handful of the richest countries have waged a world tax war so corrosive, they’ve broken down the global corporate tax system beyond repair,” Mr Cobham said.
The index, which is the first-ever study of its size and scope, scores each country’s system based on the degree to which it allows companies to avoid tax. This is then combined with the scale of its corporate activity to determine the share of global taxes put at risk.
It covers 64 jurisdictions and is based on a score reflecting how aggressively they use tax cuts, loopholes, secrecy and other mechanisms to attract multinational activity.
Other countries in the UK network, including Turks and Caicos Islands, Anguilla, the Isle of Man, and Guernsey, also scored highly for allowing corporate tax dodging.
“The UK, Netherlands, Switzerland and Luxembourg – the Axis of Avoidance – line their own pockets at the expense of a crucial funding stream for sustainable human progress.
“The ability of governments across the world to tax multinational corporations in order to pay teachers’ wages, build hospitals and ensure a level playing field for local businesses has been deliberately and ruthlessly undermined.”
source: independent.co.uk