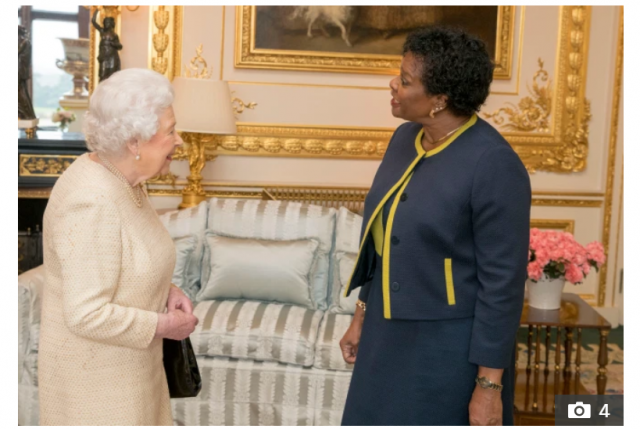 Queen Elizabeth is set to be removed as the head of Barbados.

Queen Elizabeth II, who is the head of state in the UK and 15 other Commonwealth realms, including Canada, Australia and New Zealand, will be dropped as monarch by Barbados next year.

Before it celebrates its 55th anniversary of independence from British rule in November 2021, the prosperous West Indies nation will make history by becoming the first country in almost three decades to sever ties with the British royal family and become a republic; Mauritius being the last to do so in 1992.

Sandra Mason, the Governor-General of Barbados, said Tuesday in a speech written by Prime Minister Mia Mottley that “the time has come to fully leave our colonial past behind,” and announced that the country would be fully transitioning to a republican system. Mottley, who has been prime minister since 2018, is the first female to hold the post.

Why Barbados wants to become a republic?

After Barbados became independent in 1966 after 341 years of British rule, it chose to retain a formal link with the British royal family, as did other self-governing Commonwealth nations such as Canada and Australia.

However, the decision to not sever ties completely was not without controversy, and even the first prime minister of Barbados, Errol Barrow, said that the country should not “loiter on colonial premises”. In 1998, a constitutional review commission in the country recommended that Barbados become a republic. Before Prime Minister Mottley, the move was also championed by her predecessor Freundel Stuart.

So, this week’s announcement does not come as a surprise to Britain, and both the British royal family and the UK foreign ministry have reacted by saying that the decision was up to the people of Barbados.

The Caribbean nation is, however, expected to remain a member of the Commonwealth of Nations, the 54-nation club of mostly former British colonies which is led by the queen, and includes India.

The Governor-General of Barbados, who represents the Queen at formal events, said in the Tuesday speech on behalf of the nation’s ruling government, “Barbadians want a Barbadian Head of State. This is the ultimate statement of confidence in who we are and what we are capable of achieving. Hence, Barbados will take the next logical step toward full sovereignty and become a Republic by the time we celebrate our 55th Anniversary of Independence.”

What is the significance of the move?

When Barbados decided to retain the British monarch as head of state even after achieving independence, it was seen as a strategic move to maintain close ties with the United Kingdom.

However, many thought of the link as a lingering symbol of imperialism and racism– a view that seems to have become overwhelmingly popular today.

Experts have also said that move could have received an impetus thanks to the Black Lives Matter movement and its worldwide anti-racism protests after the death of George Floyd in the US in May.

Image: Queen inspects the Army at a visit to Barbados in 1977.

Barbados to relieve the UK Queen of her duties by 2021.

“Barbados will take the next logical step toward full sovereignty and become a republic by the time we celebrate our 55th anniversary of independence.”

In the Caribbean region, Barbados will now follow the lead of Guyana, who dropped the queen as head of state in 1970, Trinidad and Tobago in 1976 and Dominica in 1978.

The decision could also have an effect on Jamaica, whose prime minister has pledged to hold a referendum on the topic.

The same royals were once ‘Emperors’ of India

When the British ruled India, the Queen’s family, known as the House of Windsor, held the title of ‘Emperor/Empress of India’ from 1876 when Victoria was the ruling monarch. The last person in the family styled as ‘Emperor’ of India was George VI, Queen Elizabeth II’s father.

The Windsors’ legal ties with India were severed after the country became a republic in 1950, but continued with Pakistan, which did not adopt its first constitution until 1956, and Elizabeth II officially served as the country’s ‘Queen’ for four years after her coronation in 1952.