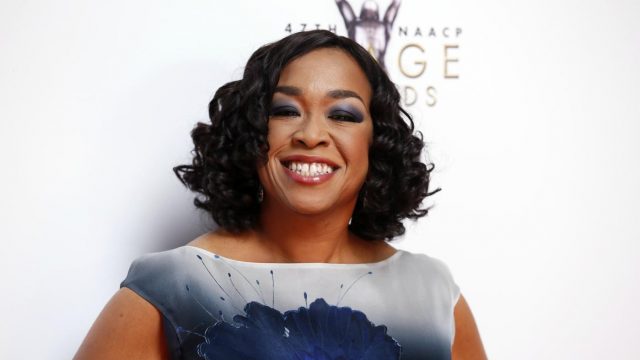 In an exclusive excerpt from Glamour’s new book, the greatest showrunner of our time shares her blueprint for success.

A note from Samantha Barry, Glamour editor in chief: At the very first Women of the Year Awards, in 1990, Glamour’s legendary editor in chief Ruth Whitney took to the stage at the Rainbow Room in New York and saluted the women who lit up the year. The “doers,” as she called them, the “darers,” and the “defiers.” Women who, as that year’s special Women of the Year print issue also declared, “took charge, spoke out, risked their lives, made a difference.”

Those very sentiments have formed the beating heart of Glamour’s annual celebration ever since. But Women of the Year is so much more than just one spectacular night each year. The awards have become a living, breathing history—mapping out the evolution of women’s power. Which is why, as we approached our 30th anniversary, I wanted to take this moment in our heavily digital, often fleeting world to create a permanent testament to our honorees, with our brand-new women’s empowerment book Glamour: 30 Years of Women Who Have Reshaped the World.

I am forever blown away by our honorees’ achievements in the years that we recognized them, and also by their legacies beyond—including the incredible Shonda Rhimes, whom we honored in 2007, and who with her roster of shows (under her production company Shondaland) is one of the most influential and important storytellers and producers in Hollywood history. In an exclusive excerpt from Glamour’s new book, the producer of Scandal, Grey’s Anatomy, How to Get Away With Murder, and Bridgerton shares her lessons on how to be a leader. I dare you not to be inspired.

It took a long time for me to feel successful. I felt unsteady and unsure, like everything could end at any moment, for years—I think until, maybe, season 10 of Grey’s Anatomy. I wouldn’t call this feeling impostor syndrome, because impostor syndrome is feeling like you don’t belong or deserve to be there. I didn’t feel that way. But people who sit back and go, “I’ve made it,” have always made me nervous. To me, a healthy sense of fear and nerves make sense.

The first time I felt truly comfortable, I was being inducted into the Television Academy Hall of Fame, in 2017. For me, success is more about realizing that the race can stop being run, that I could stop worrying that if I slowed down somebody would think my career hadn’t worked out or I haven’t done a good job.

Over the years I’ve become interested in what it takes, really, to be a good leader. As I progressed working on my shows, it was important that they not just be run, but run well, and in a way that reflected me and my values. But how do you make that happen? In a lot of ways, working on Scandal was a huge education because I met professional fixer Judy Smith. Scandal was partially inspired by her background in crisis management in Washington, D.C., and learning about her job gave me a lot of keys to leadership. So much so that when I met other interesting, powerful women, I started asking a lot of questions about what they were doing. I asked everybody from Reese Witherspoon, who I think is a smart businesswoman, to Anita Hill, who I think knows the world. Every person you meet has some sort of a gift that you can learn from. The idea that you can’t learn something from somebody is always a mistake and an opportunity lost.

One of the biggest things I learned was the idea that everything really does stop and start with you. I saw the difference between passively being good at my piece of my job and working hard to be a leader of my company. You have to be comfortable with the idea that mistakes, no matter what they are, are yours. If the successes are going to be yours, the mistakes are going to be yours too. Because of this, the people who work for you need to be a reflection of your values.

I was raised to believe I belong in every single room I’ve ever been in.

Part of being a great leader is hiring amazing people and delegating well, so you can let these great people do the things they are great at, while you do the things you are great at. I look to hire people who are passionate about what they do as well as people who will argue with me. I respect that more than anything. A lot of people are willing to tell you exactly what you want to hear at all times, and the sound of your own voice echoing back at you is a very hollow sound. I don’t always have the best idea, but somebody else might.

There’s real power in admitting you’ve done something wrong and reapproaching the problem with a solution. The biggest mistake people make in terms of owning power is not being able to admit they don’t know something. I watch it happen all the time. Instead of saying, “I don’t know that. Can we find somebody who can teach me or tell me more?” people try to hide and pretend. That silence becomes a self-fulfilling prophecy—when you pretend you know something, everybody realizes you don’t know anything and lose respect for you. The ability to admit you were wrong or didn’t know something is real power and growth.

I never thought there was a problem with being called bossy, bitchy, or difficult. That might be the way I was raised. I was the youngest of six, with a lot of sisters. It just never occurred to me “bossy” was a negative thing. Speaking my mind, standing up for what I want…I was raised to believe I belong in every single room I’ve ever been in. To be concerned that somebody else thinks I’m bossy or difficult suggests their opinion of me is more important than my own belief in myself.

I wish I’d known two things before I started my career: First, nobody knows what they’re doing. There’s a feeling when you’re younger that certain people really have it together. The thing I find fascinating is that I feel the same way at 50 as I did at 22 and 15, in a lot of ways. I may be more mature, but it’s not like you have a wild change in spirit and become this phoenix. Second, I wish I had known everything would be okay. The universe unfolds. I would have enjoyed the moments more as they were happening versus worrying about what was going to come next.

We’ve all been in a place where we’ve felt stuck or worried about the future. I was there before I decided to go to film school and before I sold my first script. You have a responsibility to listen to your inner voice telling you something’s not working, but that’s not an excuse to quit. It’s an excuse to pivot. If the thing you’re doing isn’t working, do something else. Remember, success does not happen immediately. Grey’s Anatomy was my first television show, but there is no such thing as an overnight success. Stop feeling like a failure if it doesn’t happen as fast as you think it should because Grey’s came after seven years of me in this town having to sell CDs to buy gas.

When I was younger, my friends and I used to say to each other, “You’re never going to be as willing to be as poor as you are right now.” No matter who you are, where you are, what age you are, you’re always going to have more expenses and responsibilities, so you might as well do it now. Take the risk.

Excerpted from Glamour: 30 Years of Women Who Have Reshaped the World, published by Abrams. Available to buy here.