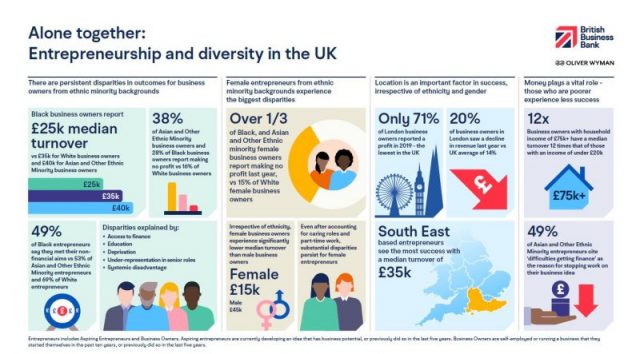 Undertaken by the British Business Bank and Oliver Wyman, the research shines an important light on the challenges facing entrepreneurs from all walks of life and acts as a clear evidence base for the British Business Bank and for others. We will therefore be submitting this report, alongside other evidence, to the more broadly-based Commission on Race and Ethnic Disparities later this year.

There are persistent disparities in business outcomes for business owners from ethnic minority backgrounds.

After starting a business, Black business owners have median turnover of just £25,000, compared to £35,000 for White business owners. Median productivity is less than two thirds.

Only half of Black entrepreneurs meet their non-financial aims, compared to nearly 70% of White entrepreneurs.

Asian and Other Ethnic Minority entrepreneurs have better outcomes than Black entrepreneurs. However, they have a lower success rate for starting a business and see less success overall compared to White entrepreneurs.

Access to finance, deprivation, education, and under-representation in senior workforce positions partially explain these disparities. However, systemic disadvantage appears to play a role.

Female business owners of all ethnicities experience significantly lower median turnover than male entrepreneurs (£15,000 vs £45,000 per annum), and fewer say they meet their financial aims.

Societal inequalities and established gender roles, such as having primary caring duties for children and elderly relatives, contribute to these disparities. However, even when these are accounted for, female entrepreneurs still experience less success.

Location is an important factor in success, irrespective of ethnicity and gender.

Greater London was found to be the toughest place in the UK to be an entrepreneur, with just 71% of business owners in London reporting a profit in 2019.

Meanwhile, entrepreneurs in the South East and North East see most success.

Differences between London and other areas of the UK are linked to higher density of start-ups and tougher market competition. Higher costs of living and operating and greater disparity between poorer and wealthier neighbourhoods also help explain these findings.

Money plays a vital role – those who are poorer experience less success.

Irrespective of gender or ethnicity, those with lower household income are less able to invest in their ideas, have fewer resources to develop their business prior to launch, and struggle to access the finance they need.

Access to finance appears to be a major barrier for Black, Asian and Other Ethnic Minority entrepreneurs, and the reason why 39% and 49%, respectively, stop working on their business idea.

The British Business Bank has a number of actions underway with which we intend to make progress for entrepreneurs facing disadvantage:

We are submitting evidence to the Commission on Race and Ethnic Disparities, established by the Prime Minister.

We will continue to provide Start Up Loans and mentoring support to entrepreneurs across the UK.

In our venture capital programmes (Enterprise Capital Funds and British Patient Capital), we will continue to seek out fund managers with networks beyond the norm, and assess approaches to diversity as an integrated part of our due diligence process.

We are signatory to the Investing in Women Code and will continue to work with others to increase transparency in this area.

As an institution, we are conscious of the benefits brought by having a greater understanding of these challenges and their drivers. We welcome approaches by those who wish to collaborate on these

Is "Investment" in Africa akin to Extortion?