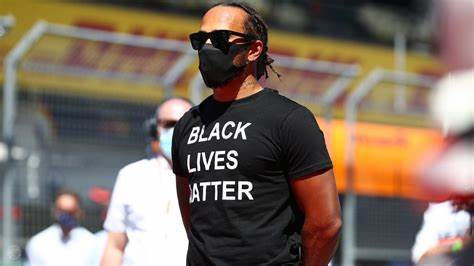 As the only black driver in Formula 1, Lewis Hamilton is fighting racism on his own
By Eugene Allen Founding editor of Black Spin Global
First Publishes: Thursday 17 Sep 2020

It’s still left to Hamilton to be a man on a solo mission (Picture: Dan Istitene/ Formula 1/Formula 1 via Getty)

Lewis Hamilton, six-time Formula 1 world champion and arguably the greatest driver in F1 history, has been taking care of business on the track for three consecutive seasons. He will likely secure another championship at the end of this campaign come December and that will be a monumental achievement – but an objective that has ranked just as high on the 35-year-old’s to-do list has been the fight against racial inequality. It’s unquestionably a worthy cause, but one the Brit has had to take on practically single-handedly. Instead of being fully supported and applauded, he has been questioned and nearly punished for doing so.

Before the delayed F1 2020 season got underway, Hamilton was not only talking the talk on social media, he was walking the walk alongside protestors on the ground at an anti-racism demonstration in London in June, after the killing of George Floyd and other Black Americans at the hands of police sparked outrage throughout the world. At the height of the protests, Hamilton bravely called out the F1 community for its silence, and prompted teams and his fellow competitors to speak up against racial injustice. His call to action led to drivers coming together before the start of every race in a show of solidarity. However, Hamilton has frequently been the only driver on the grid to take a knee while wearing a Black Lives Matter t-shirt – the other 19 drivers have all worn shirts with the vague ‘End Racism’ message, which skirts around the crux of the issue, and further reiterates Hamilton’s lone standing in the sport as the only Black driver. Many opted not to follow Hamilton in taking a knee. It feels like a kick in the teeth to the Black community, suggesting that those standing couldn’t care less about the injustices Black people continue to endure.

More encouragingly, this season has also seen Hamilton’s Mercedes AMG F1 team do away with their traditional livery, choosing instead to completely black out their cars in ‘a signal of the team’s commitment to fighting racism and discrimination in all its forms’. In addition, Hamilton, alongside the Royal Academy of Engineering, is in the process of setting up the Hamilton Commission – with the aim of encouraging more young people from Black backgrounds to get involved in motorsport. Yet it’s still left to him to be a man on a solo mission. Hamilton’s actions exemplify just how out-dated motorsport’s rigid rules and regulations are.

Earlier this week, the FIA, the governing body for world motorsport (who are also a signatory of the Olympic charter) ruled out investigating Hamilton’s actions at the Tuscan Grand Prix after he swapped his Black Lives Matter shirt for one saying ‘Arrest the cops who killed Breonna Taylor’ and ‘Say her name’. It was suggested that the Mercedes driver may have breached article 1.2 of the FIA statutes which proclaims: ‘The FIA shall refrain from manifesting discrimination on account of race, skin colour, gender, sexual orientation, ethnic or social origin, language, religion, philosophical or political opinion, family situation or disability in the course of its activities and from taking any action in this respect.’

Thankfully, for all concerned, the organisation saw sense and chose not to investigate. But surely the onus here is on FIA and F1 to update its rules when it comes to drivers using their platform to shine awareness on important issues that impact human life. Hamilton’s actions exemplify just how out-dated motorsport’s rigid rules and regulations are, and he should be commended for making the sport’s highest authority review the way they govern.

Seeing Hamilton take a knee before every race is incredibly powerful, and I’d hazard to say even more impactful than seeing Black athletes from team sports like football, basketball, and cricket among others, simply because F1 is, in essence, an individual sport. I liken his actions to those of tennis star Naomi Osaka who wore seven masks, each depicting a different name of a victim of police brutality, during her run to the US Open title earlier in September 2020.

Hamilton, like many other sportspeople and celebrities alike, has spoken glowingly about what Osaka did and both – who are further alike in coming from predominantly white sports – are speaking up and bringing attention to an issue that is plaguing the world.

Black Economics says – Thank you Lewis for having the courage to stand up for what is right. Thank you for being prepared to be the sole voice while others looked aways. Stay true to yourself. Millions are backing you from afar – even if you do not know it.