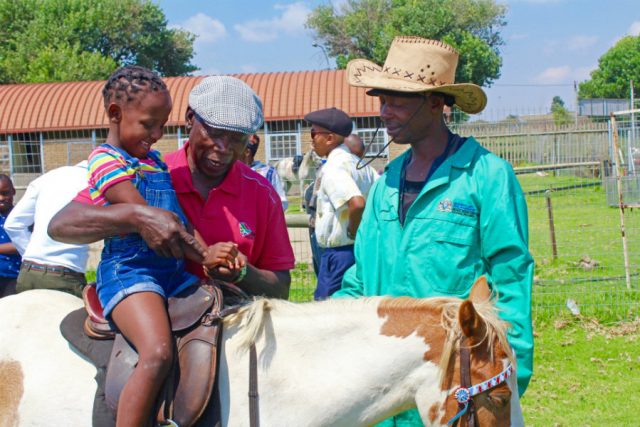 Enos Mafokate, who went from an apartheid-era stable boy to championship rider representing South Africa, now runs a school introducing children in Soweto Township to riding, a sport where racial divides persist and which is steeped in colonial history.

In the faded snapshots he keeps from the early years of his show jumping career five decades ago, Enos Mafokate is never hard to pick out of the crowd.

There’s an unsettlingly simple reason for that: Mr. Mafokate is black. And in those days, deep into South Africa’s project of total racial segregation, nearly every other face at riding competitions here – from the competitors to the judges to the crowds filling the grandstands – was white.

But if the sport’s past was unsettling, he says its present is even more so.

At a recent riding competition here, an organizer stopped the champion show jumper at the gate to tell him that the entrance was “only for competitors.” At another, a security guard approached, asking him to show proof of ownership for the horse he was loading into his trailer.

‘A fearless fighter’: Biden taps Kamala Harris for VP
When apartheid toppled in South Africa in the early 1990s, the racial balance of the political ruling class tilted sharply. But other institutions – from schools to businesses to the real estate market – were slow to follow. And in a sports-mad country like this one, those lingering divisions have been nowhere more publicly apparent than on the pitch, the court, and the field.

For many in South Africa, transformation in sport is an explicitly political act. For decades during apartheid, South Africa was barred from international competitions like the Olympics and World Cup because of its refusal to field desegregated teams.

Today, in the shadow of that dark history, how much a sport has diversified can be seen as a barometer for the country’s progress more generally.

Despite symbolic gestures aplenty – think Nelson Mandela donning the green and yellow jersey of the country’s mostly-white rugby team during the 1995 World Cup, as seen in the film Invictus – and practical measures like quotas and training camps in poor areas, many sports here remain strikingly exclusive.

During the 2014/15 season, for instance, black Africans made up just 10 percent of players appearing internationally for the Proteas, South Africa’s beloved national cricket team. And the Springboks – the national rugby team – have frequently been criticized for failing to meet a target of fielding 50 percent black players – a roomy term that here includes African, Indian, and mixed race South Africans – in their international matches. Only 10 percent of South Africa’s population is white.

Still, there may be few more obvious examples of untransformed sport than show jumping, a sport as steeped in colonial history and mores as a cup of English breakfast tea (also a South African favorite).

For black riders, Mafokate says, it comes down to two issues: culture and cost.

In black townships – the name given to the sprawling apartheid-era commuter suburbs created for black residents of South African cities – horses are most often seen as work animals, haulers of coal and firewood. And although there is an energetic tradition of horse racing in some parts of the region – notably neighboring Lesotho – competitive equestrian events remain virtually unknown here.

“For our kids, it’s completely unheard of,” says Estralita Masilo, the principal of Khauhelo Primary School, who on a recent Saturday morning walked with about 40 of her young charges three miles from their homes to Mafokate’s Soweto Equestrian Centre, where he trains young riders from the surrounding township and offers horse therapy to people with disabilities.

“I bring the kids here because I want them to know about all the sports out there in South Africa – golf, rugby, cycling, swimming,” Ms. Masilo says, rattling off a list of historically white sports. “It just expands what they can aspire to in their lives.”

But if lack of exposure has played a major role in keeping black South Africans out of equestrian sports, cost is also a significant factor. Riding schools in Johannesburg’s lush northern suburbs regularly charge upwards of R250 ($18) for a half-hour lesson, not to mention the hundreds of dollars young riders need to fork over for gear and competitions each year — this in a country where more than 40 percent of workers earn less than R3000 ($200) per month.

Mafokate’s school, which he opened on a parcel of land donated by the city in 2007, is free. Young riders pay only in their assistance with caring for the 20 horses stabled here – many of whom are rescues from the local SPCA where he used to work – on a sprawling parcel of green land flanked on every side by Soweto’s boxy red-brick houses. He employs just one stable hand, whom he pays from his government old-age pension.

“This is a different kind of riding school – kids don’t just come here to learn to ride horses, they come also to learn about animal welfare, about discipline, and to have a community,” says Oupa Maesela, the director of “Horseman,” a film about Mafokate, and his biographer.

About these ads
The school draws financial resources from the city of Johannesburg, local and national equestrian societies, corporate sponsors, and some individual donations. In the decade since it opened, several of Mafokate’s riders have won national and international awards, rattling the notions of who belongs in South African riding circles that Mafokate has had to negotiate for his entire five-decade career. Khensani Maluleke, represented South Africa at the 2010 World Equestrian Games in Kentucky on the reserve team. And Mafokate’s grandson Kabelo Mafokate won the South African Junior Championships in 2008.

“Honestly, I’m just so proud of them,” he says. “People are surprised to see riders from the townships.” They’re even more surprised, he says, when his competitors beat them.

In show-jumping, Mafokate’s life seems a microcosm of the sport’s slow shuffle forward over the years.

His own career began at 17 – the age of some of his most accomplished students now. He landed a job cleaning stables and grooming the horses of white riders, imagining what it might be like to jump himself. Over the next few years, he began competing with other black riders, but it would be more than a decade and a half before he could convince the country’s white competitions and associations to begin taking him in as well.
*

Courtesy of Enos Mafokate
Enos Mafokate was among the first black competitors on the European show jumping circuit in the 1980s.
But even then, apartheid stalked his career. In 1983, when he shattered his arm after being kicked by a horse in a white Johannesburg suburb, Mafokate spent hours circling the city looking for a hospital that would take him in. And when he traveled abroad, the country’s liberation movement pushed him to take an explicit political stand against South Africa’s white government at his competitions. He refused.

“I told them, I’m not a politician, I’m a sportsman, I’m just here to compete with the best,” he says. “It wasn’t about apartheid. It was about showing them that I was the best in the world.”

How to Earn from Expired Domain Investing