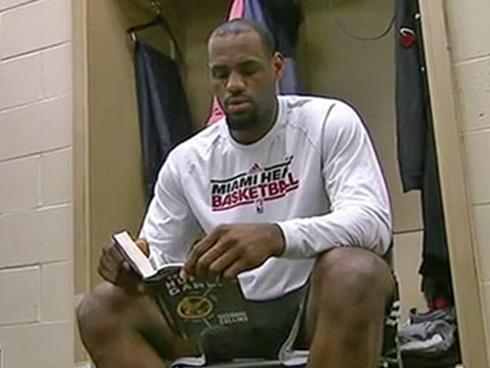 Can we call off this silly LeBron Hating now? He’s not only about to win an NBA championship, which would be all the proof required in most cases, but in leading his team to that title, Lebron James over the course of the Finals has played as brilliantly and as boldly as any of the universally praised champs of the past 30 years,… as boldly as Kobe or Shaq, Duncan or Dirk, Jordan or Olajuwon, Magic or Bird.
And en route to the top of the mountain, LeBron didn’t brag or trash-talk anybody, didn’t pop his jersey, didn’t engage in self-absorbed end zone celebrations or otherwise annoy the hell out of us by unnecessarily calling attention to himself. He wasn’t guilty, that I’m aware, of a single moment of boorish behavior or rudeness.
The most noticeable thing LeBron’s done so far, besides average nearly 30 points and drag Oklahoma City to the brink of elimination, is turn his locker stall into a library cubicle. This is related to his performance on the basketball court, trust me.
There’s no need to read between the lines to see that LeBron James is focused on a title.

Surely, you’ve noticed the videotape of LeBron reading books before every game the past two months. Biographies, history, pop culture, best sellers, short books that explore human psychology, you name it. LeBron lying on the floor reading “The Hunger Games.” LeBron sitting at his locker reading “The Pact,” about three boys from challenging circumstances agreeing to finish college and attend medical school. It seems every time James was photographed before or after a game this spring, he was reading a book.
The cynics among us — which essentially is everybody in America outside South Florida when it comes to LeBron — justknew this whole reading thing had to be contrived. Maybe a publisher or an author was paying him. How about that for product placement? Maybe some PR guru had gotten to LeBron and convinced him this was the best possible way to change his image, that appearing to read a book whenever he wasn’t bouncing a basketball was the best way to reverse two years of bad pub following “The Decision” and taking his talents to South Beach.
I must admit to becoming obsessed with what LeBron was reading and why. Why now? Why so many books, and why these particular books? Suppose, even if somebody was paying LeBron, little boys who don’t normally read anything started to read books because they saw their hero reading in a locker room? Who, whether this was contrived or not, could object to that?
Turns out there’s nothing whatsoever feigned about LeBron’s one-man book club. Nobody’s paying him to read (although it’s OK for folks to be paid to lose weight on TV). He’s not doing product-placement favors for any author buddies. Simply, LeBron James decided before the playoffs he would be best served if he stopped watching hour after hour of sports on television, and got off the Internet, and stopped tweeting, and stopped reading Twitter. (We should all have such an intervention.) If he could shut off all the noise, LeBron wouldn’t have to hear why he and his Miami teammates are such losers and play so poorly in the fourth quarter, and why if the Heat didn’t win this year the team should be blown up.
So, LeBron figured, why not just read books to occupy his non-basketball time during the playoffs?
He called his dear friend/confidant/business associate Maverick Carter, a voracious reader who keeps a preferred reading list in his PDA, and said, essentially, “Maverick, I need you to pick up five to seven books from your book list.”
So Carter did. Stuff like “The Fighter’s Mind” and “Shogun” and “The Post-American World” and “West by West” (the Jerry West bio) and “The Tipping Point.” “The Hunger Games” trilogy was LeBron’s idea. So was “Decoded,” the Jay-Z bio. TV off, books on. Just like that.
Even after Carter delivered the books, as asked, he presumed LeBron would consume them on team flights and buses. But there he was early in the playoffs, reading “The Hunger Games.” It became as much a part of his pregame ritual as shooting.
Where cynics saw a ballplayer doing something for the cameras, I saw a chance, whatever LeBron’s motivation, for a role model to use his influence to make an impact, intentional or not. According to The Alliance for Excellent Education, only 3 percent of all eighth-graders read at an advanced level. Imagine how many of those eighth-graders want to do what LeBron James does. At 13, 14 years old, they can’t drive the car he endorses, might or might not be able to afford the shoes he endorses.
But they can borrow a book even if they can’t afford to buy one. And if LeBron is reading, then reading must be fairly cool. Is there a better message the world’s best basketball player could send?
I’m not suggesting LeBron had any of this in mind when he asked Carter to pick up some books; I am suggesting that LeBron wields a whole lot of influence. Only a handful of professional athletes can make this kind of cultural impact: Peyton Manning, Kobe Bryant, Tiger Woods and LeBron James. And it’s not just children who have taken the cue; there are multiple reports of LeBron’s books being passed around the Heat locker room.

LeBron James says reading during the playoffs has been calming.

The secondary effect surely is welcome. When it comes to what he intended to do, LeBron says he sought to simply find a calm place before each game from which to operate. Teammate Dwayne Wade told an interviewer this week that the difference between LeBron last season (when he averaged about 18 points per game in the NBA Finals) and this season (he’s averaged 29 points per game in the Finals) is that fewer things bother him now, that he’s less likely to be thrown by a bad play or bad stretch of plays.
In response to a question from ESPN.com’s J.A. Adande, LeBron elaborated on what is clearly a direct cause-effect relationship between reading books and his performance on-court.
And while the extreme cynics will hold his feet to the fire for just about anything, I’m not about to be dismissive of LeBron when he says, “It just slows my mind down. It gives me another outlet. Throughout the playoffs, all you think about is basketball. All you want to do is play basketball. But at the same time it can become a lot. It can [get] to a point where it’s overloading to the mind, and you think about it too much. It’s hard to get away from it because you’re playing every other day, you talk about it every single day, you prepare every single day.
“So the reading has given me an opportunity to, just for those couple hours of the day or those 20 minutes, 25 minutes before the game, an opportunity just to read and think about something else and get a sense of what else is going on besides the game of basketball. It’s made me comfortable. I’m not saying it’s the trick. It’s just something that I decided to do at the beginning of the postseason, and it’s worked for me.”
One person close to LeBron went so far as to say, “It went from pleasurable for him to being therapeutic.


“You can get too wired before a game,” the friend said, “and this definitely helps him drain that, helps him avoid the anxiety of the playoffs.”
It’s a story with more than a little irony, the kid who skipped college finally maxing out in pro ball when he finds a new passion: reading. It really should also put to bed the notion that LeBron is some villainous figure. If people in Cleveland want to stay angry with LeBron, so be it. He has to own that he fractured the relationship with his homeys, but it seems he largely has already.
Other than that, LeBron simply isn’t a villain. He isn’t controversial on any level, doesn’t do anything antagonistic, has never brought an ounce of embarrassment to either the Cavaliers or Heat by anything he’s done on the court or in his personal life.
Of course, if he’d won a title already, we’d largely excuse him even if he’d conducted a scandalous personal life. But there’s no scandal here, nothing that needs to be explained away or apologized for. LeBron James has played the kind of basketball, most would say finally, we’ve been waiting to see since he was a junior in high school. For two years, ever since his decision to take his talents to Miami, LeBron has had to play in the swirl of drama most would say he created, and not to the kind of results he promised.
But on the eve of his first professional championship, LeBron has not only delivered indomitable basketball, but also in the middle of all this noise around him, there we see him night after night, calmly reading, peace of mind having arrived at last. 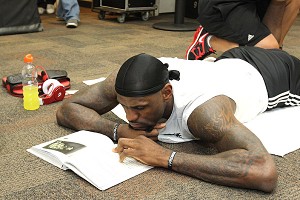