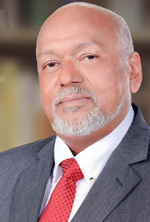 Following intense debates in the National Assembly and hints of slashing another budget,  President Donald Ramotar has asserted that any moves by the opposition parties to cut this year’s budget would be without grounds, thus highlighting vindictiveness on their part.
Speaking briefly  to media operatives yesterday,Mr. Ramotar opined that, “As far as the debate is concerned, (Moses) Nagamootoo summed it up that the People’s Progressive Party Civic (PPPC) won the debate, but still they want to cut the budget.”
“It seems to be so illogical. If you won the debate you expect that you have convinced them, but they’re still cutting the budget. So obviously they have no grounds and this is now down to vindictiveness.”

On the issue of cutting funds, the President asserted that more than the government, the country would be at a loss. It would mean less resources being spent on the country and slowing down the pace of development that we are anticipating.”
When asked about the government’s next move in anticipation of the expected budget cuts, President Ramotar said that he is unsure, but the administration would be watching carefully at all the related developments.
He expressed satisfaction with the performance of his ministers during the budget debates.
“I am satisfied with the PPPC members, who spoke extremely well and who did a very fine job. The Opposition, many of them had not even spoken on the budget, but I think they hadn’t come to debate, they came with a fixed decision from before.”
Minister of Finance Dr. Ashni Singh recently unveiled a $208.8B budget, but the opposition parties, the Alliance for Change (AFC) and A Partnership for National Unity (APNU), have indicated their willingness to cut monies from areas they feel funds are being wasted and in sectors where the issue of lack of transparency still exists.
The AFC issued a clear warning that it will cut bad project allocations, waste and extravagance from the budget. Party frontbencher, Moses Nagamootoo, told the National Assembly last Tuesday that allocations hurting national interest, “like subsidies for the state-run propaganda machines that continue to lock-out the opposition and refuse to give us fair and reasonable access, should not get a cent!”
APNU’s shadow Finance Minister, Carl Greenidge, when responding to questions related to the cuts this year said that, “We will not be a toothless opposition.”
In light of last year’s High Court judgment on budget cuts which saw Chief Justice Ian Chang ruling that the joint parliamentary opposition could have either passed or voted down the Budget; but cutting was not an option, Greenidge said that all decisions handed down by a Chief Justice are subject to an appeal that may be taken as far as the Caribbean Court of Justice- and that may very well be a course for the opposition, if the government is to again run to the courts.
Opposition parties had earlier in the year expressed dissatisfaction in relation to tripartite talks in preparation of this year’s budget. They are additionally adamant that the law provides for parliament to have the last say on Budget estimates.
Referring to the C J’s ruling on last year’s budget, Greenidge had stated that, “No one judge in Guyana has the final say”, expanding on his point that the laws of Guyana are there to govern and that the opposition has a right to cut. He charged that persons may interpret or choose to intercept the law differently.
Several agencies such as the National Communications Network (NCN), the Government Information Agency (GINA) and Customs Anti-Narcotics Unit (CANU) had monies allocated to them slashed, when the opposition attempted to have their say in relation to funds necessary for the functioning of certain state entities.

Falling into Debt: What You Should Be Aware Of

BitMari – The African Bitcoin from Zimbabwe

Serena Williams – the Greatest of All Time