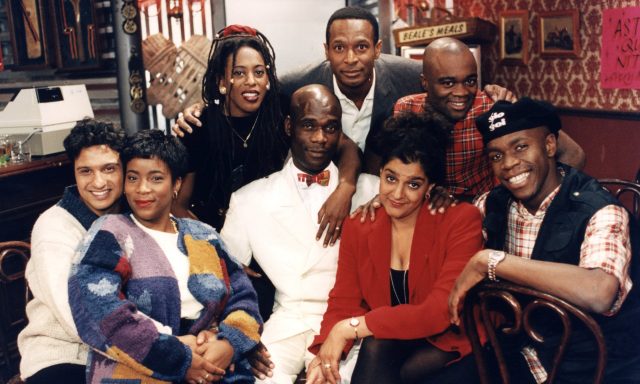 They said they’d lost the tapes’:

The hit black sketch show is back on our screens after a quarter of a century. But, despite its huge legacy, there is still much to be done when it comes to representation on British TV

The cast of The Real McCoy, including Judith Jacob, third left. Photograph: BBC
Three sharp-suited black men in bow ties walk into the British National Party headquarters, eager to join the racist outfit. But first they must answer some questions. So began one sketch from The Real McCoy, the groundbreaking BBC show that, 30 years ago, brought a black British perspective to TV.

“England versus West Indies in the cricket. Who do you support?” asks the recruiter. “Millwall,” replies one of the men, cleverly sidestepping the question. “England and Cameroon are playing football. Who do you support?” “England,” says one. “Why?” asks the recruiter, incredulous. “Paul Ince, Paul Parker, Des Walker …” the men reply, listing England’s black players of the era.

But then the gag takes an unexpected turn. The black men suggest that they are more British than the white racist. “But I was here first!” he wails. “Tacitus, the Roman scribe said the first people he saw when he came to Britain were black,” replies one. “David MacRitchie the historian agreed,” says the second. “Archaeologists Gerald Macey and Godfrey Higgins came to the same conclusion and they were white,” says the third. Where does that leave me, asks the white man. “About two weeks,” says the first man, “to go back to the the Caucasus mountains where you were naked and covered in hair.” They slam the door on him.

It has been 25 years since The Real McCoy was on our screens, which, given how many times Dad’s Army has been broadcast in the interim, is disappointing. One of the show’s stars, Felix Dexter, once said that the Beeb appeared to give “no recognition that the show ever existed”. How sad that he died before the BBC decided to put up all five series on iPlayer from this week. “It’s been a long time coming,” says his fellow star Judith Jacob. “If I had a pound for every time I’ve been asked when it’s coming back, I wouldn’t be talking to you. They said they’d lost the tapes. And then they turned up. Strange that.”

Jacob, who had already starred in Channel 4’s black sitcom No Problem! and as health visitor Carmel Roberts in EastEnders before being asked to appear in the show, recalls The Real McCoy fondly. “I just remember how we would perform a sketch and if it made us laugh, it was in. If not, out. Simple economics.” The show was performed before a live studio audience, and Jacob says the crowds laughed so much that often they would have to do as many as five takes.

In one sketch set in a 17th-century west African village, Jacob played a woman listening as an elder read to a crowd from a flyer nailed up by an English soldier, inviting villagers on an adventure of a lifetime across the ocean, with free travel, board and lodging on arrival. The other villagers are excited, but Jacob says: “There must be some catch.” She’s right. Turning over the flyer, there is a sketch of the accommodation – a slave ship.

The revival of The Real McCoy comes at a serendipitous moment. Black Lives Matter protests challenging white privilege and a lack of access to positions of power. “You can’t be what you can’t see,” Youlande Harrowell, one of the 1% of black teachers who make it to become headteachers, told the BBC earlier this week. Only 51 out of the 1,097 most powerful roles in the country are filled by non-white individuals, according to a new Colour of Power survey by the consultants Green Park and the not-for-profit organisation Operation Black Vote. Television is no exception. “When someone like Michaela Coel comes along, it feels like a miracle,” says Jacob. “But it also feels like she has to bear the whole burden of representation, which is unfair.”

Hopefully, that underrepresentation of black and Asian people on screen will change. In direct response to the racist murder of George Floyd in the US, the BBC’s director general, Tony Hall, last month announced the corporation’s Creative Diversity Commitment, prioritising £100m of its commissioning budget over three years from 2021 towards “diverse and inclusive content” along with a new mandatory 20% diverse-talent target in all new network commissions from next spring. Hall also appointed the broadcaster June Sarpong as director of creative diversity. “As a black woman, I feel and share in the pain that so many are feeling worldwide,” said Sarpong. “It makes it all the more important that we show up now not just with words but with meaningful action.”

Words are certainly cheap: when Greg Dyke took over from John Birt as director general of the BBC in 2000, he criticised it for being “hideously white’” because of the scarcity of black and Asian people working within it. But despite that indictment, arguably, it remained so. Indeed, a decade ago, the comedian Stephen K Amos suggested that black comedy on TV was rationed. “It’s one in, one out,” he said.

Why did black and Asian shows fail to build on The Real McCoy? Some have cited the critical and ratings failure of The Crouches, the BBC sitcom starring a black cast that ran between 2003 and 05. Standup Angie Le Mar told the Guardian that after the Crouches flopped “the BBC pulled back and said: ‘We can’t do black sitcoms.’ That’s too much pressure. Why do we always have to be fantastic, or die?”

Hanson has another explanation. After The Real McCoy ended, TV became more culturally conservative. For a while, Channel 4 became a reliable source of black and ethnic minority comic talent. Hanson produced Desmond’s (1989-94), starring Norman Beaton, and the fledgling channel was also responsible for Get Up, Stand Up (1994-99), a black standup show. Many of these programme were commissioned by Farrukh Dhondy when he served as commissioning editor for multicultural programming. But that post no longer exists and C4’s radical remit is long dead. It was a similar story at the London network LWT, where diverse commissioning decreased in the wake of ITV’s re-formation.

As for the BBC, its problem with commissioning and representing black and Asian talent was typified by how The Real McCoy originated. One day in 1990, Hanson says he was summoned to meet the BBC’s head of comedy Robin Nash: “He realised that the BBC was not fulfilling its diversity remit and something had to be done.” Hanson had worked with the the Black Theatre Co-Operative and produced comedy gigs in south London, working with many of the comedy talents who would appear on the show, including Curtis and Ishmael, Robbie Gee and Leo Chester (AKA Leo Muhammad), so he was a good person to call in. But there was something wrong with this picture: a white executive was commissioning a white producer to remedy the problem of black underrepresentation.

“It’s still the same,” says Jacob when I put this to her. She is thrilled to see The Real McCoy back on screens, but her joy is tempered by the fact that it never revolutionised British TV as she hoped. True, The Real McCoy now has a belated successor in Famalam (whose cast acknowledge the debt to Jacob and her peers), but that has taken nearly a quarter of a century. She thinks Sarpong and her BBC colleagues have their work cut out to improve black and Asian representation, not just on screen but behind it, from commissioning editors to makeup artists.

Today, the best non-white British comedy talent is often found not in theatres or comedy clubs but online. Think how the Coventry schoolteacher and successful YouTuber Guz Khan was signed up by the BBC to make Man Like Mobeen. Or how Kayode Ewumi made a hit webseries called #HoodDocumentary, which was picked up in 2016 by the BBC who commissioned him to make the excellent sitcom Enterprice two years later.

The Real McCoy benefited from being given a prime-time slot on the schedules when it premiered at 9pm on BBC Two in May 1991 and garnered regular audiences of 5 million, many of them white. “It wasn’t just for black or Asian people,” says Jacob. “Funny isn’t black or white. I watched Dad’s Army, at 10,000 levels it has nothing to do with me, but I laugh at it.”

While the Real McCoy’s political gags – on slavery, racism and multicultural incomprehension – are as depressingly pertinent today as they were in the early 1990s, what also makes it essential viewing, whatever your ethnicity, is that it remains funny. I love Dexter as Nathaniel the bumptious trainee accountant from Lagos, rudely schooling West Indians in the audience how to speak proper English. “What I have noticed,” he says, waving a cane, “is that if there is an aitch in front of the vowel you are taking it away. And if there isn’t one, you are putting it in. For example: ‘My friend Harchibald is in ’ospital. They are keeping ’im in hovernight.’” Or the peerless Llewella Gideon as Miss Hortense Pretentious, the black Margaret Thatcher clone running as a Tory candidate. “Britain is for the English,” she tells the party conference chillingly to rapturous applause, “and so we need to keep the foreigners out.” Or Misery’s West Indian restaurant, where the only thing on the menu is abuse from the surly staff. It’s been too long: how lovely that they are back.

Thank you BBC for finding the Tapes. Black Comedy gold is available for binge viewing at last. We are seriously happy about this.

The Real McCoy is available on iPlayer now

A New Dawn for Zimbabweans?

What Economic Growth in Africa Means