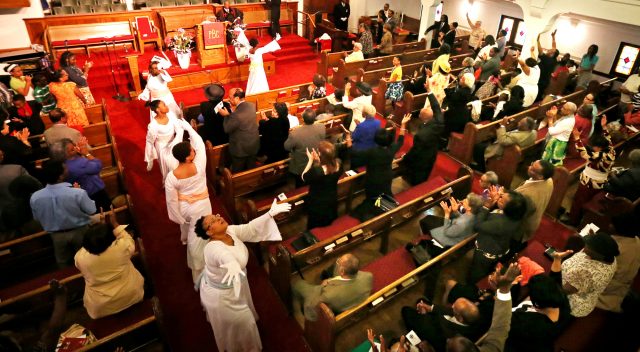 The early history of economic development in the Black community involves the productive interaction between Black churches, mutual aid societies and fraternal lodges, all of which concerned themselves with the material as well as moral well-being of the community.

Black churches and their allied institutions like the mutual aid societies, the quasi-religious fraternal lodges and the benevolent and burial associations, which often met in churches helped to create the first major black financial institutions: the black owned banks and the black life insurance companies.

It is the largest socioeconomic institution in the Black community.
It is the largest repository of Black monetary wealth, conservatively the annual income of the institutional Black church is over $2 Billion
The Black church has a revolutionary potential it possesses for transforming the African American community and America as a whole.
Not All African-American churches involved in economic redevelopment are located in major cities. A growing number of rural churches are launching businesses providing job opportunities for their members, many of whom are poor people with few skills.

The Black Church’s Potential for Transforming the Black Nation.
The judicious and creative use of funds provided by the institutional Black church along with other Black institutions and organizations, corporations and businesses as well as personal and family accounts placed in Black owned, controlled or influenced financial institutions could provide billions of dollars for the take over by Black community of its own wholesale and retail markets.

The Black church “as nation” could construct a nationwide economic wholesale-retail network which could in turn form a distribution and market network which would then become the foundation of a Black owned and controlled manufacturing and import export system.
Through national organizations and linkups, chains of stores and franchises could be established. In certain locales both large department stores could be established and administered by professional, impartial managements.
Churches and church associations through their pledges and financial commitments may aid in the founding and development of new banks, financial instruments and arrangements which can help to revitalize the community.

Other approaches can be developed which can have a more visible, palpable and immediate impact on transforming the ecology, opportunity structure, social welfare and behavior and consciousness of the community.

Despite their relatively large collections and famous ability to raise money for various causes to which they may commit themselves , Black churches as a whole possess very little in the way of invested wealth.

Women are an Untapped Opportunity in Africa’s Rise to Prosperity