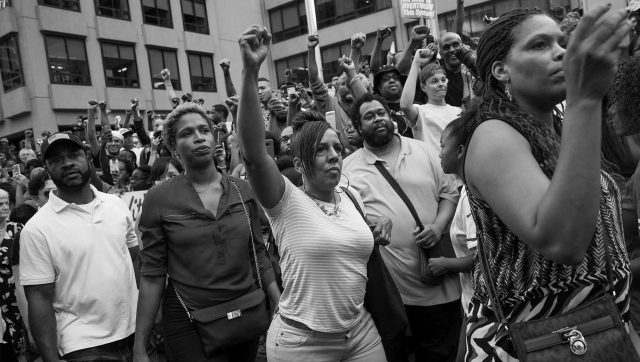 According to a recent report in the Washington Post, at least four Democratic presidential candidates — Elizabeth Warren, Kamala Harris, Julian Castro and Marianne Williamson — in one way or the other favor the idea of African-American reparations.

Although reparations is not a new concept, its exact meaning in the current context has not been well defined. As the Washington Post put it: “In the modern political sense, the term ‘reparations’ is a little like ‘socialism.’ It means very different things to different people.”

That ambiguity was highlighted earlier this week when presidential candidate Bernie Sanders on CNN, asked about his stance on reparations, dodged the question by saying it “depends on what the word means.”

The traditional use of the term reparations is to signify a financial recompense for African-Americans whose ancestors were slaves and lived through the Jim Crow era. But commentators such as journalist and author Ta-Nehisi Coates focus more on current disparities in income, wealth and education between blacks and whites, arguing that these are a current-day legacy of slavery and Jim Crow, and that action is needed to reduce these differences. As Coates says in a recent Atlantic Magazine article “The Case for Reparations”: “What I’m talking about is more than recompense for past injustices — more than a handout, a payoff, hush money, or a reluctant bribe. What I’m talking about is a national reckoning that would lead to spiritual renewal.”

This seems to be presidential candidate Kamala Harris‘ use of the term when she said: “We have to be honest that people in this country do not start from the same place or have access to the same opportunities. I’m serious about taking an approach that would change policies and structures and make real investments in black communities.”

Presidential candidate Elizabeth Warren talked about reparations in a similar vein in an interview with the New York Times: “We must confront the dark history of slavery and government-sanctioned discrimination in this country that has had many consequences, including undermining the ability of black families to build wealth in America for generations. We need systemic, structural changes to address that.”

But it’s not just commentators and presidential candidates who perceive a need for a national reckoning, new policies and structures, and systemic, structural changes. Black Americans, over 150 years after the end of the Civil War, also believe that the U.S. government needs to be involved in bringing about significant and meaningful race-related changes.

My colleagues Jeff Jones and Mohamed Younis recently reviewed new Gallup data on views of race in America today. Taken as a whole, the results show that black Americans express very low levels of satisfaction with the status of how blacks are treated in this country, believe that blacks still face discrimination across a number of everyday situations and that black-white relations will be a problem for many years to come.

Well over half of blacks believe that blacks are treated less favorably than whites in dealing with the police, in stores and malls, and on the job. About half of blacks say blacks are treated less favorably in neighborhood shops, in restaurants and in getting healthcare. More than one in five black Americans say that within the last 30 days they were treated unfairly in stores, in restaurants or by the police. Slightly fewer, but still substantial numbers, say that they have been treated unfairly at work or in receiving healthcare.

A slight majority of blacks are pessimistic about the future, saying that relations between blacks and whites will always be a problem in this country.

Black Americans also clearly believe that government actions should be taken to help bring about change. Over seven in 10 blacks favor affirmative action programs for racial minorities in this country, and a majority of 57% of whites agree. Previous Gallup research has shown that about two-thirds of black Americans believe the U.S. government should play a major role in trying to improve the social and economic position of blacks and other minority groups in this country. Over seven in 10 blacks believe that new civil rights laws are needed in this country to reduce discrimination against blacks.

What about reparations per se? Several polls in recent years have shown majority black support for the concept. A YouGov online survey in 2014 showed roughly six in 10 black Americans said that the U.S. government should offer cash payments and education and job training programs to the descendants of slaves. A Kaiser Family Foundation/CNN survey from 2015 found that 52% of blacks said that “as a way to make up for the harm caused by slavery” the government should “make cash payments to Black Americans who are descendants of slaves” (8% of whites agreed). A Marist poll from 2016 showed that 58% of blacks supported the idea for reparations for African-American descendants of slaves.

Overall, blacks in the U.S. have continuing concerns about discrimination and structural impediments to their success, and most believe that the government must step in and do more to help this situation. The concept of reparations per se is broad, and the exact level of black support for the idea depends on how it is defined. But we know that at least a majority of blacks appear from past polling to be in favor — not surprising given the general context of black support for the government actively addressing race inequalities in the U.S. today.

Reparations May Be a Significant Policy Issue in 2020 Elections

The black vote could be a critical factor in next year’s Democratic presidential primaries, particularly in the early voting states of South Carolina, Alabama, North Carolina, Tennessee and Virginia. Black voter turnout will also be an important factor in the general election.

We know that blacks remain dissatisfied with their current situation and want the government to do more to address it. This provides a supportive attitudinal context for the concept of some form of reparations. Already, the frequency of discussion of the idea of reparations indicates that it may well be a much more significant policy debate in 2020 than it has been in previous elections.

Presidential candidates’ typically broad discussions of racism and racial inequality may, by necessity, morph in this election cycle into a targeted discussion of direct government actions designed to address the racial disparities.

President Trump’s approach so far has been to emphasize the improved situation of blacks as a result of the positive overall economy (saying, for example, “Because of my policies, Black Unemployment has just been reported to be at the lowest rate ever recorded!”). Democratic candidates, it appears, are going to be much more likely to bring up the concept of more direct government action, including reparations. Whatever the approach, the ways in which candidates discuss race in America today may help determine the eventual party nominees — and the outcome of the November 2020 general election.

3 Ways to Easily Get the Most Recent Stock Market News