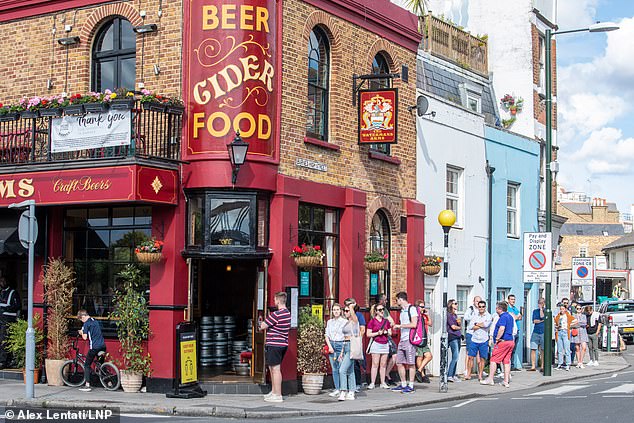 Any sense of joy I had at the prospect of a pint with my friends down the pub a week on Saturday was snuffed out when I read what it will entail.

Before we set foot over the threshold we’ll have to register our names and contact details. The pub must keep this information for 21 days so, if someone in the bar that night subsequently tests positive for Covid-19 in this period, the NHS can trace us and order us to isolate for two weeks.

If that’s not off-putting enough, we’ll probably be confined to a table and banned from the bar. We may even have to order our pints via a smartphone app. No thanks. I’d rather sit in the back garden with my mates.

It’s not just the inconvenience I object to, but the intrusion, and the red tape nightmare created by a raft of new rules to govern our lives that will no doubt offer new opportunities for rapacious lawyers on one side or the other.

Because, while millions have welcomed the announcement that the nation’s enforced ‘hibernation’ is coming to an end and we can begin to reclaim our liberty, I fear the opposite is true. When the history of the pandemic in Britain is written, we will discover that it actually accelerated the loss of liberty — our civil liberties — and of privacy.

Even the justice system is playing the coronavirus card. The Lord Chief Justice, Lord Burnett, is proposing to suspend the right to trial by jury in order to clear a backlog of around 40,000 cases, which built up while the courts were closed in March and April.

Cases could be decided, he suggested, by a judge sitting with two magistrates. It is not hard to imagine that becoming a permanent arrangement. Yet the right to a trial by jury dates back centuries and is a vital principle of our legal system.

When it comes to consumers, the Government and businesses are exploiting the crisis for their own gain under the guise of safe-guarding public health.

In doing so, they are constructing a permanent surveillance infrastructure to keep tabs on us and our lifestyles and accumulating valuable data to be used commercially.

Take the phone app that we’ll be ordering our drinks on. Such apps are the initiative of the big pub companies such as Wetherspoons and Greene King — and their new-found enthusiasm for them has little to do with stopping the spread of the coronavirus. In fact, Wetherspoons introduced its app three years ago. The terms and conditions give the game away, including the words ‘we may collect and process’ your name, address, phone number and email address.

In other words: we’re going to collect data on you. We’ll know where and when you drink, what you drink and how much you drink — all priceless information when it comes to targeting you with marketing guff.

As for the NHS Test and Trace app and its high priest, Health Secretary Matt Hancock, by its very nature it is an infringement of our personal liberties because it enables the authorities to know where we’ve been and in whose company.

Many will say this is a small sacrifice in the fight against the virus, which is a fair point. But it is telling that Mr Hancock has been pushing app-based private health companies, including one called Babylon, for years.

In 2018, in the London Evening Standard, he endorsed Babylon’s ‘GP at Hand’ app, which lets users have video consultations with GPs via their smartphone.

The same year, he made a speech in which he spoke of creating a ‘health-tech ecosystem’ where we use apps ‘to help us all manage our health like we do our finances’, keeping an eye on our blood sugar, heart rate and so on.

Small wonder that he leapt at the chance to force a test and trace app on us — saying it was ‘our duty’ to use it.

You can bet that if he can get his app to work — which is looking pretty questionable at the moment — he will find some excuse for why we should let the Government track us and the NHS monitor our health on a permanent basis.

And this type of mission creep is inevitable. Between them, the app manufacturers and medical establishment would seek ever more of our personal health details to monitor and mine.

Some train companies, too, have used the coronavirus to justify a reservation-only ticket system to control numbers of passengers and ensure social distancing. The truth is that they have been lobbying for this for years. By creating a system where we all have to book in advance and pay online via credit card, they can collect valuable data on our travelling habits and use it to exact the highest possible fares from us.

Last year, the now happily defunct Virgin Trains called on the Government to phase out open tickets and make reservations compulsory on long-distance trains. Now, funnily enough, services such as those on the East Coast mainline between London, Leeds, Newcastle and Edinburgh have been made reservation-only.

Will they revert once the coronavirus crisis is over? Don’t hold your breath. I bet advance booking remains compulsory on many trains.

Nothing, however, has been more insidious than the way the payments industry has seized on the coronavirus as an opportunity to further its push to persuade the Government to abolish cash.

No sooner had the PM announced lockdown on March 23 than UK Finance — the trade body for the banking and finance industry — announced that it was increasing the limit for contactless card payments from £30 to £45.

False reports started to trickle out about a World Health Organisation warning that notes and coins could spread the virus. Actually, the WHO said no such thing, advising only that people wash their hands after handling cash.

Nevertheless, a recent survey by Which? found that one in ten shoppers has been turned away from a store during the pandemic because it was refusing to accept cash, supposedly on hygiene grounds.

For years, the payments industry has been lobbying for the abolition of cash because it would mean a chance to double the $1 trillion it annually extracts in fees from card payments, and to cash in by selling lucrative data on our buying habits.

Any retreat from the use of cash creates havoc for the one in ten people in Britain, mostly on low incomes, who don’t have a bank account and who are frozen out of buying anything when stores refuse cash.

Unless we resist it, and insist on paying in cash, more and more shops will go this way.

Contactless payments might be free for now, but if cash is ever abolished, payment companies will be able to charge us what they like, because there will be no free alternative.

Huge economic damage has been wrought on Britain by the lockdown, but it’s been boom time for the payments industry. Visa and Mastercard shares are both up on the year. So, too, are shares in Experian, which handles consumer data, as well those of many technology companies.

The truth is that the virus has given the surveillance state a shot in the arm. While the rest of us struggle, Big Brother has never felt perkier.

Antigua government prepares for legal showdown in US courts

The gilded cage: Who does the CFA franc really benefit?