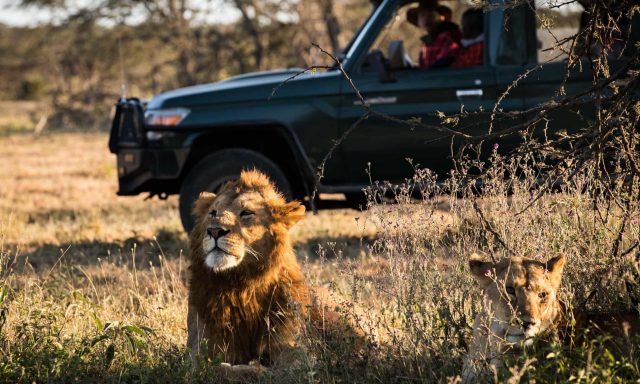 Kenya has lost 70% of its wildlife in 30 years, but conservancy schemes could halt the decline – and benefit local communities

Xinhua/Alamy Parsaloi Kupai’s home, situated on the edge of Ol Kinyei conservancy near the Maasai Mara game reserve, is no different from any other Maasai homestead – oval-shaped huts with an almost flat roof and walls plastered with a mixture of water, mud and cow dung. At the centre of the homestead is a cattle boma, an enclosure where his livestock spends the night, safe from the many predators that roam the area.

Kupai, 47, and his two wives chose to live here after they surrendered 69 hectares (170 acres) of land to the 7,500-hectare conservancy. He is among 240 landowners who gave up their highly valued grazing land for the project.

Parsaloi Kupai gave up his grazing land to make way for the project.
“I cannot graze on that land any more,” he tells me, pointing to a hill far into the horizon, the outer reaches of the conservancy. “It is now owned by elephants, wildebeests and lions.”

Conservancies around Kenya’s world-renowned Maasai Mara national reserve have become a lifeline for vulnerable wild animals that continue to experience a decline in their habitat. According to Kenya Wildlife Conservancies Association, Kenya has lost 70% of its wildlife in the last 30 years.

Researchers spearheaded by the University of Groningen recently pored over 40 years of data that revealed the negative effects of increased human activity along the Mara-Serengeti boundary. The Mara-Serengeti ecosystem straddling Kenya and Tanzania is one of the largest and most protected ecosystems in the world, spanning 40,000 sq km (15,400 sq miles).

The researchers found that areas bordering the Mara-Serengeti have experienced a 400% increase in human population over the past decade, while larger wildlife populations in key areas on the Kenyan side were reduced by more than 75%.

Michiel Veldhuis, lead author of the study from the University of Groningen, concluded: “There is an urgent need to rethink how we manage the boundaries of protected areas to be able to conserve biodiversity. The future of the world’s most iconic protected area and their associated human population may depend on it.”

Communities around the national reserve were driving their livestock further into protected areas. This encroachment, coupled with a lack of clear strategy by the government, has brought wildlife conservation to a crossroads.

Dickson Kaelo, head of KWCA, says: “A growing population has seen more land that formerly served as dispersal corridors give way to farming, human settlement and infrastructure development. However, inadequate investment in national parks and lack of a strategy to manage the more than 60% of the country’s wildlife outside protected areas has resulted in a more calamitous loss of wildlife species.”

The conservancy model, Kaelo says, is one way to tilt this imbalance, and in the greater Mara region, more than 14,000 landowners have embraced the idea by forming 15 conservancies that offer close to 142,000 hectares of refuge to wild animals. Apart from Ol Kinyei, other conservancies in greater Mara include Naboisho, Olare Motorogi, Lemek, Mara North, and Siana.

How it works
Landowners in a conservancy identify a tourism operator willing to set up a safari camp within the new block of land. The operator benefits from tailor-made safaris since a conservancy has a higher concentration of wild animals owing to enlarged rangelands. Funds derived from conservation and accommodation fees and philanthropy are shared between the operator and landowners at an agreed percentage.

Kupai receives Ksh20,000 (£193) every month for the land he surrendered to Ol Kinyei conservancy, money that he invests in livestock and his children’s education.

Critics, however, ask whether setting up community-based conservancies is the best form of land use, as opposed to farming or raising livestock. Some landowners have protested over what they see as skewed agreements between them and tourism operators, with the latter being accused of making huge profits at the expense of landowners.

In their defence, conservancy proponents argue that both agriculture and livestock-keeping heavily depend on adequate rainfall, something that is in short supply around the Mara. In addition, they say the soil in the area is too rocky for any meaningful form of farming to take place, and that mechanised farming is too expensive for the many small landholders.

“Ideally, a conservancy is a commercial venture and an alternative form of land use to the local Maasai,” says Simon Nkoitoi, the senior warden and manager at Ol Kinyei Conservancy. “The economic benefits derived from this form of wildlife conservation outweigh other commercial ventures, otherwise the local Maasai would not trade their grazing fields for wildlife conservation.”

Ol Kinyei was set up in 2005, partly due to the efforts of Jake Grieves-Cook, a veteran of the local tour industry who has worked in sustainable tourism for more than 40 years. His tour operations outfit, Gamewatchers Safaris, operates camps in a number of conservancies in Kenya, including Ol Kinyei.

Operators like Gamewatchers must adhere to strict tourism regulations laid out by the group conservancy management. As an example, there can only be a single tent per 700 acres and no more than 12 tents per camp. Low tourism densities in such conservancies mean the few guests have access to thousands of acres, increasing the chances of a memorable wildlife experience. The carbon footprint is kept to a bare minimum.

The economic benefits of a conservancy go beyond the land-leasing fees paid out to landowners. In the largely rural settings where conservancies are located, safari camps have created job opportunities for youths who now work as camp managers, drivers and tour guides, housekeepers and chefs.

“Look at this camp. All these workers come from the local community and are direct beneficiaries of the conservancy model. The success of the conservancy translates to job security,” Nkoitoi says,sitting on a lawn outside Porini Mara Camp. Herds of elephants and other grazers are in view across a small stream. “They [animals] seem to feel safe in the conservancies. They are less aggressive as there is little human footprint,” says Nkoitoi.

Nkoitoi is part of the conservancy management team. His role includes overseeing a team of 19 rangers charged with securing this vast piece of wild Africa. A smartphone app known as Wild (Wildlife Information Landscape Database) assists Nkoitoi and his team in collating wildlife numbers and their location, information that is then transmitted to the conservancy rangers’ post. The application also helps map out possible human-wildlife conflict hotspots. In the greater Mara ecosystem, such conflicts are not in short supply and continue to test the fragile coexistence between local communities and wildlife.

Sitting under a giant yellow-backed acacia, Nkoitoi’s phone rings. On the other end is a ranger who informs him of an elephant incursion into a human settlement. “We will check it out in the morning,” he tells the caller. “If we don’t address such issues in time, those people can take matters in their hands,” he says after hanging up. “They can get trampled by the elephants as they try to chase them away.”

The following morning, Nkoitoi visits the village, Ereyiet Oltome, located on the eastern edge of Ol Kinyei. Tempers are high following the invasion of elephants. Several homesteads stand a few metres from a thicket where more than a dozen elephants are holed up. The previous day, an elephant had chased a young man who, in a bid to distract his pursuer, threw his traditional wraparound to the ground. “Look! This is what the elephant did to his shuka,” a young man says, holding the tattered cloth belonging to his friend who was too traumatised to venture outdoors. He was fortunate. Some don’t live to relate a close encounter with an elephant.

Nkoitoi is soon joined by Marc Goss, head of the rapid response unit at Mara Elephant Project. The villagers are relieved to hear the roar of his helicopter, a sound they have heard before when elephants have invaded their farms. For hours, Goss tries every trick in the book to drive the elephants back to the conservancy. “It is tricky driving elephants out of the private fields,” he says during a break in the operation. “They are clever animals. Mothers will never leave their young behind. Some even go under the helicopter to avoid detection from the air.”

Flushing out elephants near a Maasai homestead

By 2pm, a handful have been driven back to the confines of the conservancy. “At least we tried. We did our best,” says Goss. The operation was set to continue next day.

Elephant incursions into human settlements are a new phenomenon around Maasai Mara. While the conservancies have increased the land under wildlife conservation, communities on the borderlines have fenced off blocks of land partly to preserve the grass for livestock. Grazing is allowed in some conservancies and outlawed in others. Elephants are attracted by the lush grass within the fenced-off areas.

Despite the periodic conflicts between wild animals and humans, there is general agreement that the conservancy model is the way to go in preserving what most of the world has lost.

With funding for the conservation model disrupted by the Covid-19 pandemic, which has prevented thousands of foreign tourists who would have trooped to the Mara to watch the annual wildebeest migration, a number of emergency fund appeals have been launched. For example, £44,867 has been raised to support local communities and protect endangered wildlife in Mara Naboisho conservancy, while Gamewatchers is urging donors to adopt an acre of land for a year with a donation to the Wildlife Habitat Trust, a fund set up to help to pay the wages of staff working in the conservancies as well as the land leases.

The Kenyan government has also announced it is setting aside 2bn Kenyan shillings (£15m) in the coming financial year (starting July 1) to support wildlife conservancies.

“We have hope that wildlife will flourish,” says Kaelo of the conservancy model. “This will happen if investment in our national parks and reserves is quadrupled and private landowners and local communities are effectively incentivised to ensure wildlife is perceived as a national asset.”