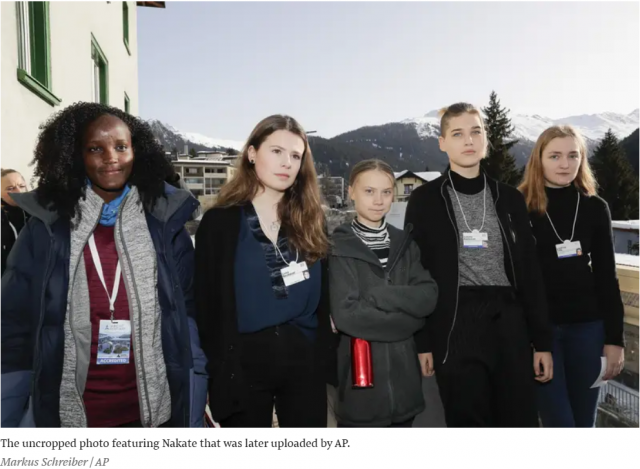 A Ugandan Climate Activist Was Cropped Out Of A News Agency Photo Of Greta Thunberg At Davos.

Vanessa Nakate told BuzzFeed News she was heartbroken to see websites use a photo featuring four white activists but not her.

Vanessa Nakate is a 23-year-old climate activist from Uganda who during the week beginning 21st January, attended the World Economic Forum in Davos.

On Friday 24th January, She took part in a news conference with Greta Thunberg and other activists ahead of a Fridays for Future protest in the Swiss town.

However, she was dismayed to find that in news coverage of the event, she had been cropped out of a photo issued by the Associated Press news agency featuring Thunberg and fellow activists Luisa Neubauer, Isabelle Axelsson, and Loukina Tille. AP later changed the photo that appeared as the thumbnail on Twitter for the story Nakate tweeted.

“I was cropped out of this photo!”

Nakate told BuzzFeed News via Twitter DMs she was heartbroken when she saw the photo. “I cried because it was so sad not just that it was racist, I was sad because of the people from Africa.

“It showed how we are valued. It hurt me a lot. It is the worst thing I have ever seen in my life.”

Nakate also posted an emotional 10-minute-long video discussing her experience at the summit and how it felt seeing the cropped photo. We would like to encourage everyone to watch the video.

What it means to be removed from a photo!

Share if you can What it means to be removed from a photo!
Vash4Change🇺🇬 @vanessa_vash

Nakate, an activist since 2018, was inspired by Thunberg to start her own climate movement in Uganda and began a solitary strike against inaction on the climate crisis in January 2019.

This is me! Your LONE climate striker from Uganda. I don’t choose to be that way but nothing to do about it. I was inspired by @GretaThunberg to start climate strikes in Africa and I am still going. I will introduce something to the climate movement. Hope you like it. Thanks

There has been criticism in the past for the way media coverage has focused on the climate activism of white protesters.

Greta Thunberg
✔
@GretaThunberg
Replying to @vanessa_vash
I’m so sorry they did this to you… you are the last one who would deserve that! We are all so grateful for what you are doing and we all send love and support!!❤️❤️💖💖💖hope to see you soon again!!

It has come to my attention that more than one article has cut @vanessa_vash out of the photos. That is unacceptable, her voice is just as, if not more, valuable than ours in a place like this. #ClimateJustice

A spokesperson for AP told BuzzFeed News, “There was no ill intent. AP routinely publishes photos as they come in and when we received additional images from the field, we updated the story. AP has published a number of images of Vanessa Nakate.”

Sadly this happens all too often. Throughout history the contributions of black people have been airbrushed out, and the white person gains all the credit and all the money. But now we can call out people who do this, and you can too, if you see this injustice.

The Census – how true or real are the results. Can we trust the figures?

Legacy History of the slave Trade in Bristol, UK