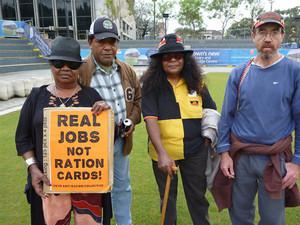 Compulsory income management of disadvantaged welfare recipients was slammed by speakers at a forum at the Bankstown Arts Centre on April 11.
The forum, organised by the Say No to Government Income Management: Not in Bankstown, Not Anywhere campaign coalition, attracted about 40 people to hear representatives from unions and Aboriginal, migrant and youth groups call for a campaign to stop the extension of income management from July 1 this year.